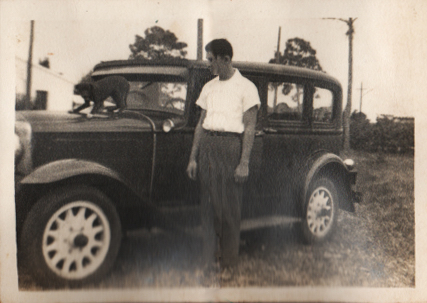 It was 1936 at the tender age of 6 that I was introduced to Miami on a family vacation to Miami Beach.

Our hotel was on Ocean Drive overlooking the swaying palm trees and the ocean beyond. It was love at first sight. Little did I realize this beautiful place would play a major role in my life. We returned five years later, in 1941, from our home in Sioux City, Iowa.

We settled in Miami Shores in a rental, now on the historic register, on Northeast 94th Street, and later purchased a home closer to the bay. We were unfamiliar with Florida winters and basked in the glory of going to the beach in December. On the other hand, 1941 was a cold winter, and with no heat, we sat very close to the fireplace. Solar panels on the roof were the only source of hot water. Air conditioning — what was that?

I attended William Jennings Bryan Junior High School in North Miami, which seemed like the end of civilization. Kids came from everywhere, including Ojus and Opa-locka. If you misbehaved, punishment was swift, and if kept after school, it was a long walk home via the FEC railroad tracks.

Miami Shores was a great place for children with its community house and playground. Many afternoons were spent there. They even had their own football team. There were camp facilities at Greynolds Park, and my Boy Scout troop would play games defending the tower on the mound there.

During these war years, there was a shortage of fuel and transportation so our bicycles did fill the need. We rode everywhere, from Greynolds Park to Miami Beach to see the German prisoners from World War II at Bal Harbour or to the hotel section to see our troops in training.

Another principal form of transportation was Miami transit bus #11. If we weren’t going to the Rosetta Theatre in Little River to see the double feature and partake in a Royal Castle 10-cent hamburger and 5-cent birch beer, we would take bus #11 to the Olympia Theater downtown to see the vaudeville shows there. No trip was complete until we went to the Walgreens lunch counter for a black-cow float and a visit to Jahn the Magic Man store.

Our wanderings required a little cash, but you could go Mr. Griffing’s farm in North Miami and hoe pineapples for 50 cents an hour. I had the good fortune of having a Miami Daily News route of about 90 customers. The paper was so thin it could be folded into a biscuit and thrown into the yard or bushes. The down side was that you actually had to go and collect the 50 cents a week directly from the customers and face the wrath of a misguided toss. I got to keep 10 cents; the rest went to the paper. I eventually saved enough money to buy a motor scooter, which made delivery much easier.

At age 13, having a motor scooter opened new horizons and no part of town was unreachable. Of course, having a motorized vehicle required cash for fuel (when available) and maintenance. Fortunately, another employment opportunity presented itself. My friend Eddie’s parents had a cabana at the McFadden Deauville. I, being a frequent guest, got to know the staff, which subsequently resulted in an offer of employment. The position required that I be there at 7 a.m. and rake the beach, open the cabanas and pull out the furniture, then bring a supply of towels to those in attendance. Afterward, I attended to the locker room for the dispensing of towels there. On slow days, this allowed me the freedom to wander about the old hotel and to swim in the Olympic-size pool with its 10-meter diving platform.

By now, I was attending Miami Edison High School and proudly consider myself one of the “Over the Hill Gang.” The highlight of the year was the Edison (Red Raiders) game against Miami High in the Orange Bowl. This involved taking bus #11 downtown and then walking a couple of miles to the stadium. The demeanor was much more joyous coming rather than going home as we never won a game.

At age 16, automobiles entered the scene. Now, having a full-fledged driver’s license, we were out to buy a car — not just an ordinary car but a “hot rod” with a V8 engine, preferably a ’32 Ford roadster. Once having acquired such a vehicle, the fenders were removed along with the muffler. When challenged at a stop light, we would spin the rear wheels when the light changed, peeling off in a mad dash down busy streets to demonstrate our power and lack of fear.

The major airport attraction was at Dinner Key where Pan American landed its amphibian airplanes on the bay and taxied to the terminal, which is now city hall. The bay was a huge source of entertainment. It provided access to the spoil islands, where we would often camp overnight. On occasion, we would venture south to the Ragged Keys in South Bay in a small sailboat. Both lobster and mosquitoes were in good supply.

One of my favorite outings was a trip to Key Biscayne before the causeway. I recall climbing in the remains of the movie set for They were Expendable, filmed there in the 1940s. We would wander about the coconut plantation and swim in Hurricane Harbor without another soul around.

In 1947, dramatic changes began to occur in my life, all for the better. Upon graduation from Edison, I was enrolled at the University of Florida. After four years of college and two years in the military, I returned to Miami a married man to a community that was already in the throes of change. I settled in my old neighborhood, and now after 74 years, live just two blocks from my original home in an area that was once my paper route. To say things have changed is a massive understatement. I embrace the change and the diversity of our community. I no longer care for race cars but still love the bay.

Miami will never be the same as it was in those days, but it may be better in many ways. I cherish the fact that I was able to enjoy Miami in those early times and trust that my great-grandchildren will enjoy their city as I have, most likely in different ways.