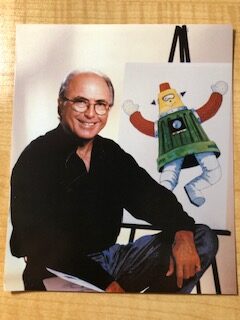 From 1964 until 1984 Toby the Robot was the lovable character on Channel 7’s kid shows and a household name among tens of thousands of South Florida children and families. Toby first appeared on Superheroes with Charlie Baxter as host. Then, as sidekick to Charlie Baxter on Charlie Reads the Comics (Miami Herald comics). After Baxter left Channel 7 Toby was sidekick to Wayne Chandler on The Sunday Funnies Show.

The robot costume was created out of a garbage can, laundry bucket, heater hosing, aluminum legs and various other parts purchased at a local hardware store. A lot of the parts were created by materials Folds obtained from Orange Blossom Hobbies in Miami. The famous robot costume was painted with bright red, green and yellow colors.

Toby communicated through a series of “beeps”. The sounds were actually made by an inexpensive Radio Shack alarm/flashlight that Folds wired to a push button switch. Interestingly, children and adults alike believed they could understand what the robot was communicating.

Folds created a character than came alive through antics, gestures and actions that intrigued children and adults alike. Children could not wait until Sunday so they could tune into the show or if fortunate enough, to be part of the live audience at the TV station. Toby’s fans sent in fan mail, pictures of Toby and families would attend his grand openings for various businesses in South Florida.

Charlie and I have been married over fifty years. It seems like yesterday that I walked into Channel 7’s studios and was introduced to a vampire wearing sunglasses! We seem to hit it off and I began being his assistant for his many appearances. I dated him when he was Countdown the Vampire and the Mysterious Stranger, engaged to him when he was Duffo the Clown on 7’s Circus and then married a robot named Toby (named after the station’s owner, Toby Ansin). We have raised four children and ten grandchildren and one great grandchild. One grandchild is at West Point and another one an airline pilot (it is the robot power!). While he entertained children of all ages, I completed my doctorate in early childhood education and traveled to many states and countries to share early childhood professional training techniques and publish books, as well as teaching as a university professor for many years. One of our daughters followed in my footsteps and became an early childhood educator.

Charlie retired the robot character at the Dade County Youth Fair in 1984 to become director of Community and Public Relations for WSVN Channel 7 and officially retired after 46 years of service to the television station. We currently reside in Palm City. Shortly after retirement Charlie contracted Parkinson’s Disease so our life took a different course with weekly therapies, doctor visits and hospital stays. I retired to devote my time taking care of him. It is the hardest and most important job I’ve ever had.

He inspires me every day with his strong commitment to his faith, his positive spirit, and devotion to his family.

People still come up to him if we are out and we begin a conversation. If they are from Miami eventually they discover he is Toby the Robot and recall and share so many memories of learning how to read while watching Toby the Robot on television.