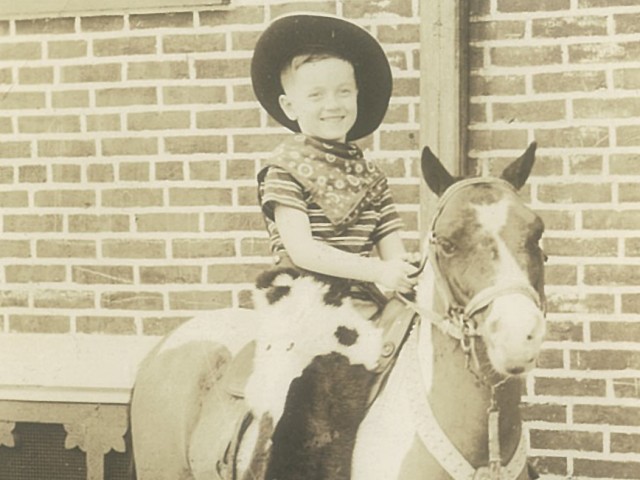 In early 1941, Europe and Asia were at war and the threat of United States involvement was growing exponentially. Not to be deterred, the Bennett family (Mom, Dad and 5-year-old Billy) stuffed its belongings into a cream-colored 1937 Packard convertible and set sail for the land of coconut palms and sea breezes.

With Miami the ultimate destination, the odyssey launched from Upper Montclair, New Jersey, but was impeded by a six-month hiatus in Wilmington, Delaware, for Dad to work and refurbish the family fortune.

On the move again, the 1,161 mile-trip south dictated two motel stops; it was not unusual in 1941 to travel all night and not find an open gasoline station, even on U.S. 1. The first morning, motoring below the Mason-Dixon line, I savored, for the first time, grits for breakfast (I never made that mistake again).

Mission completed, the trip terminated in the Magic City in August 1941, where we immediately checked into a Miami Beach hotel. And what was the first thing a red-blooded American kid would do next? HIT THE BEACH! And Mom and I did — for more than five hours.

All the exposed parts of our bodies were lobster red and we were splotched head to toe with Noxzema and looked like a couple of cherries jubilee. Welcome to Florida.

After a month on the beach, we found a house in Coral Gables, Mom and Dad got jobs, I was enrolled in school and we settled in as Miamians — for the next 50 plus years.

The first marine went over the fence, parlez vous

The second marine went over the fence, parlez vous

The third marine went over the fence

And milked the cow with a monkey wrench.

Mozart it wasn’t, but this little ditty was an integral part of my musical education in the summer of 1942.

I was 7 years old, living in Miami Beach at 87th and Harding Avenue, one block from Collins Avenue, hotel row and the Atlantic Ocean. The world was at war and the military had commandeered all the hotels on Miami Beach.

Each day, I arose early, ensuring an opportunity to march with the Army soldiers down Collins Avenue. What a thrill and what an experience. I learned all their march cadences, sang their songs and, though young, shared a sense of belonging and camaraderie with them as well. Also, it didn’t hurt that those same soldiers treated the “marching kids” like gems.

The nights, black as charcoal, were marked by darkened street lights, the few cars running with only slits of headlights visible, blackout shades in every home drawn and constant rumors of Nazi subs offshore. A small light from your house earned a visit from the air-raid warden.

A trip to the movies? Gasoline rationed, we walked the several blocks to the Surf Theatre. Of course, in those days we enjoyed a feature, a newsreel, a cartoon and maybe a sing-along where we followed the bouncing ball over the onscreen lyrics.

I lived the remaining years in Miami proper — without blackouts, military exercises and the rumors and much of the fears. But I missed being a part of the training and excitement of our United States military — and, of course, my unparalleled musical education.

I moved 12 times during my 12 years of public school in Miami. The year 1947 found me living with my parents on a wooden 31-foot cabin cruiser at Pier 4 1/2, adjacent to Bayfront Park in downtown Miami. That location placed me smack dab next to Pier 5 where the charter boats plied their trade, taking tourists deep-sea fishing in the nearby waters of the Atlantic Ocean. In the late afternoon, when the fishing fleet had returned, I would walk over to Pier 5 and check out the various small fish tossed on the dock. Occasionally, Mom would purchase a dolphin for that evening’s dinner.

Just as you entered Pier 5, and a little to the left, sat the Tradewinds Restaurant. I remember one night I was perched on a bollard at the end of a dock listening to the Tradewinds’ juke box with strains of “Heartaches,” played by the Ted Weems orchestra, drifting across the shimmering moonlit water. Other nights, I would walk over to the Bandshell in Bayfront Park and join the crowd enjoying a free concert. Not a bad life for a 12 year old.

My only other year living on the boat was up the Miami River just below Musa Isle Indian village and tourist attraction. Not my finest hour, but I would row to the river side of the village, sneak in and without benefit of an admission ticket, watch the alligator wrestling.

Boat living? Bittersweet. Lots of fun going out on Biscayne Bay most weekends and rowing on the Miami River — but little privacy, miniscule closet space, midget head and, regardless of the season, icy cold on-dock showers. Fun for a while but, truth be told, kind of glad to get back in a house.

In the late ‘40s and early ‘50s, the Citrus Grove older elementary and junior high kids, when not playing school sports, played park ball at the Annex. Annex Park, located on the south parking lot of the Orange Bowl, housed a softball field and a basketball court. A well-hit softball to left field might tag an Orange Bowl ticket booth.

Depending upon the season, we played football, basketball and softball, doing fierce battle against other City of Miami parks. Uniforms? Pants, T-shirts, and most of the time, bare feet.

The park supervisor, a local character, answered to (I kid you not) “Itchy.” The kids loved Itchy Schemer, but his greatest claim to fame was probably his brother, “Lefty.” Lefty Schemer played briefly in the “bigs” (New York Giants). Occasionally, Lefty would drop by the park and, farther than we had ever seen, rocket some balls out to right field which was deep and where the Orange Bowl wasn’t. Of course, we were in absolute awe.

The Annex eventually yielded to the need for more Orange Bowl space and the Orange Bowl itself would, not long ago, disappear from the Miami skyline. But for many of us, what will never fade is the memory, in a simpler time, of those youthful and playful Annex Park Days.