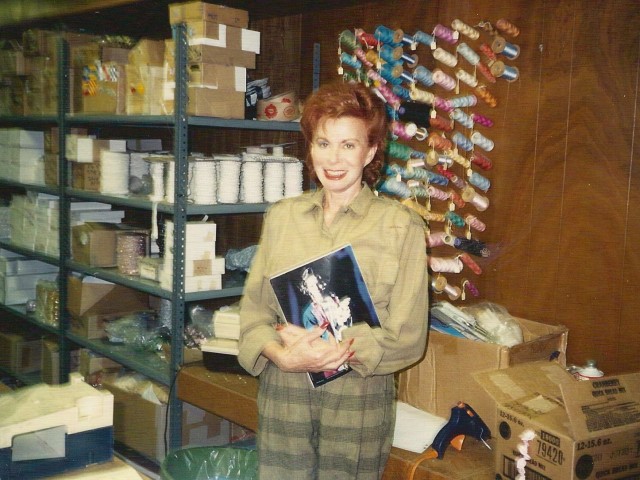 Every mother who wanted to buy her daughter a stunning dress will remember the name “Dorissa of Miami.”

This is the story of our mother, Doree Fromberg, a girl who won a scholarship to attend the New York Fashion Institute of Technology (FIT) after graduating high school, began designing and sewing dresses in her home in Miami and developed the business into an international company.

Starting with $5 and a talent, Doree became an icon in the girls dress manufacturing business. Her dresses were eventually sold all over the world including top retailers such as Bloomingdales, Macy’s, Lord and Taylor and Saks Fifth Ave.

After Doree graduated from “FIT” she did an internship at a manufacturer of childrensware. She then got married and moved from NY to Miami, and had two sons. Her mother, an energetic and affable woman, recognized Doree’s talents and took her samples on the road around the state of Florida to try and sell the dresses to specialty children’s shops.

Orders started to pour in, requiring more home sewers. She was very fortunate to find Cuban women — who had fled the island and resettled in Miami in the 1960s — and who were outstanding seamstresses. They were able to sew the dresses in their homes.

Within a short time, it became necessary to buy a small factory to handle the increased business. Without any formal business training, and no capital or financial backing, she somehow was able to build the business. She modernized the equipment, hired and trained the staff and managed the business. She also designed the dresses for all five seasons; buying the fabric and accessories and creating a sales team.

At the time, the official name of the business was “Dorissa Of Miami.” Her girl’s dresses became recognized all over the United States. The lines catered to girls party wear, communion and baptism dresses produced in sizes from infants to preteens. An additional label of “Nicole” was introduced and took off immediately.

The business kept expanding and the increased demand required a larger building. A large auto showroom building was purchased in 1972 and converted into a factory. The address was 2751 North Miami Ave. in Wynwood It was a two-story building.

On the first floor were offices, a reception area and spaces for sewing machine operators. There they pressed, ticketed and prepared garments for shipping. On the second floor was the cutting department and areas designated for stocking fabric and trim. There were also additional sewing machines, the purchasing department, designing rooms, pattern making areas and Doree’s office.

The company opened a showroom in the manufacturing center of New York City where a major part of sales volume was generated. In addition, sales were generated for the “Dorissa Collection” by a staff of independent sales people with their own showrooms in all major United States cities.

As the business continued to thrive, Doree needed to find other sources of production. This was available in factories in Honduras, Mexico and Guatemala. The cut goods were air-shipped to those factories, which had qualified seamstresses and were able to finish the goods quickly.

A retail outlet store was opened to the public 1987 at NW Fifth Avenue and 29th Street. It was called “Dorissa Children’s World, The Place to Shop for Children.” In addition to the Dorissa, Nicole and Dorissa Sport lines; the business carried out other well-known children’s lines, including boys wear. It became a very popular outlet-shopping place for local families. On “Sale Day,” a twice a year event, lines of customers would form around the corner waiting for the store to open.

The Dorissa company experienced a number of very outstanding events. Doree appeared on The Merv Griffin Show representing the girls dress-manufacturing companies of America. Other well-known designers appeared with her on the same show, i.e. Aldolfo and Oscar De La Renta. One of the covers of the New York Times Magazine section featured two girls together wearing Dorissa dresses.

There was a strong camaraderie that prevailed in the Dorissa factory. The employees became family and many continued to work at Dorissa for years. They were treated well and responded with loyalty. There was a lovely outside lunchroom where many a birthday occasion was celebrated with loud cheering and singing.

Between 2004-2006, Doree Fromberg decided it was time for her to “stop and smell the roses.” Her sons were successful in the medical field. Her husband of seven years — a prominent attorney and former Mayor of Miami Beach — wanted to travel and both of them desired to have more time to pursue some other interests.

Doree decided to sell the Dorissa label to another girls dress company. In that way the company name and label was preserved and Doree was fully relieved of all responsibilities. She did, though, consult on occasion.

The people who purchased the factory building requested that the name “Dorissa” appearing in large letters across the front of the building be left on the building. They felt it had become a landmark.

Their request was granted. It now remains the nostalgic landmark of a remarkable children’s dress manufacturing company that started out many years ago in Miami with $5 and became an internationally recognized company. This all due to the help of the influx of talented Cuban seamstresses and garment manufacturing workers.

Doree is now retired from manufacturing and has her own art studio. She’s still is able to use her creative ability in painting and making decorative collages on many themes and for special occasions. She and her husband Malcolm travel the world. They also derive pleasure from supporting many local charities.