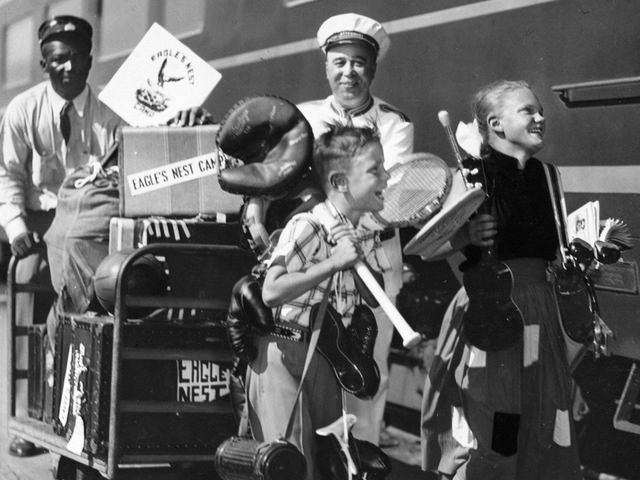 My parents, John and Muriel Greist, my sister, Judith, and I were all born in New Haven, Connecticut. The Greist name was pretty well-known in the area because the Greist Manufacturing Company was a major producer of sewing-machine attachments.

I don’t remember much about New Haven because I was only 3 when our family moved to Miami in 1948, coming via train, except for my father, who drove from Connecticut.

My dad had a chance to pursue some new banking ventures in South Florida that were very promising. He eventually ended up at the Pan American Bank of Miami on Southeast First Street in downtown Miami. The bank was founded in the mid-1940s by P.J. Serralles, a Puerto Rican sugar planter. The story is that he decided to open a bank due to his difficulty cashing a check in Miami because almost no one spoke Spanish.

One of my earliest memories of Miami was Hurricane King in October 1950. We were living in our new house on Irvington Avenue in Coconut Grove, and my dad was in the hospital when the hurricane hit. I remember kerosene lanterns guiding us through the power outage during the storm, which was one of the strongest to strike the Miami area since the 1926 killer hurricane.

Other early memories of Miami included Christmas holiday fun at the Burdines in downtown Miami, with a merry-go-round and a Ferris wheel on the fifth-floor level bridge connecting the two sections of Burdines over South Miami Avenue; the annual New Year’s Eve Orange Bowl Parade, including some great views from the Walgreens’ second-floor cafeteria on Flagler Street; and the old Miami Baseball Stadium, where I got to sit in the Brooklyn Dodgers dugout in March 1956, the year after they won their first World Series.

In the summer of 1955, I had attended a Dodgertown camp in Vero Beach, where my counselor was Peter O’Malley, son of Dodger President Walter O’Malley. The following year, I was invited to attend a Dodger spring-training game at Miami Stadium. The Dodgers trained there before the Baltimore Orioles moved in a few years later. I got to meet many of the Dodger greats: Jackie Robinson, Pee Wee Reese, Gil Hodges and Duke Snider, my favorite player. What a thrill for a young kid 10 years old.

In addition to the summer I spent at Dodgertown, my sister and I attended summer camp a few times in North Carolina. One of our trips was “immortalized” on the cover of The Miami Herald’s old “Fun in Florida” Sunday magazine on May 30, 1954, as we prepared to board the train for our journey to Eagle’s Nest Camp in Piscah Forest, N.C. The cover photo was taken by Herald photographer John Walther, and the inside cover story was written by “Fun in Florida” magazine editor Betty Garnet. (Full disclosure here: I think the photo was “posed” because we didn’t actually go to summer camp until sometime in June.”

I attended first through sixth grade at Coconut Grove Elementary School. Our principal was Oliver Hoover, a native-born Miamian and longtime educator. An elementary school in The Hammocks is named after him.

During elementary school, some of the “Old Grove” memories included after-school trips for sodas at the Liles Pharmacy and the Florida Pharmacy in the Engle Building and Saturday matinees at the Coconut Grove Theatre (yes, it was a movie theater before it became the Coconut Grove Playhouse).

Another favorite spot in the Grove was the Krest 5&10 next to the school. That 5&10 store sold almost everything one could imagine, and it stayed in business for over 60 years. I also spent a lot of time at Bryan Memorial Methodist Church on Main Highway, from my younger years all the way through college. A minister from that church performed my wedding ceremony.

After spending seventh grade at South Miami Junior High, I attended the newly constructed Palmetto Junior-Senior High School in Pinecrest beginning in eighth grade. My sister was in the first graduating class in 1961, and I graduated two years later in 1963. The school celebrated its 50th anniversary in 2008, and the class of 2011 will be the 50th graduating class from the school. My senior year in 1963, I was newspaper editor, president of the Key Club, chairman of the Dade County Student Traffic Safety Council, and was the school’s Silver Knight nominee in journalism.

Favorite hangouts in high school included the Hot Shoppes at U.S. 1 and Bird Road; Jimmy’s Hurricane at Bird and Douglas Road; the Burger King on U.S. 1 just south of Dadeland; the original Shorty’s; Royal Castle, where we could easily consume a six-pack of Castleburgers along with their birch beer; the Krispy Kreme on SW 8th Street; Suniland Shopping Center; A&W; drive-ins; and Central Stadium on Coral Way, where Palmetto’s home football games were played.

Local area attractions included Bill Haast’s Miami Serpentarium; South Dixie Bowl-O-Mat; Dixie and Tropicaire Drive-Ins; Colonial Palms Golf Course; and, of course, the Parrot Jungle. Before multiplexes, there was the Coral, the Gables, the Miracle and the Riviera theatres. We loved the aromas from the Holsum Bakery in South Miami. Restaurants included The Flame, Grentner’s, Flynn’s Dixie Ribs and the Dixie Belle Inn.

My best friends in high school are my best friends 50 years later, even though they were in the class of ’64. Those friends include Ron Lieberman and Dexter Lehtinen – both still practicing attorneys in Miami – and Fred Luss, a retired Chrysler financial executive. Another member of the class of ’64 was Vicki Campfield. I didn’t know her in high school, but she would eventually become my wife.

The first paycheck I ever received was for a one-day job as a press-box assistant for the 1963 Orange Bowl game won by Alabama over Oklahoma 17-0. The game was attended by President John Kennedy. I was near the locker room under the stadium when the game ended and JFK was leaving. I reached out to shake his hand but was rebuffed by the Secret Service. The president smiled and waved at me. Sadly, just eleven months later, he was gone.

I met my wife, Vicki, in 1967 and married her a year later. Vicki had a wonderful career in pediatric nursing at Miami Children’s Hospital and the state of Florida Children’s Medical Services. After almost a decade with Burger King Corporation and Florida Power & Light, combined with some part-time sports broadcasting on local radio, I spent the remainder of my career with Miami-Dade County. Vicki and I raised two sons, John and Patrick. Both attended Sunset High, Miami-Dade Junior College and Florida International University.

My overall favorite Miami memory was the many years of watching University of Miami football at the Orange Bowl, from the 1950s with my parents to the years with Vicki and my sons in the West End Zone family section, to the last event ever held there. That was a flag-football game in January 2008 between former Miami Dolphins and University of Miami players. The event was extra special because my two grandchildren, Zachary and Taylor, were with me. It was their only time at the Orange Bowl, and it represented the fourth generation of the Greist family to attend an event at the Orange Bowl.

Vicki passed away too prematurely in 1997, but we were blessed to share 30 special years together and many happy experiences in Miami raising our two sons.

My 60-plus years in Miami have been filled with a lot of wonderful memories. In a strange way, I guess you could say I owe all my Miami memories to a Puerto Rican sugar planter who opened a bank in Miami in the 1940s due to his difficulties cashing a check because almost no one spoke Spanish.