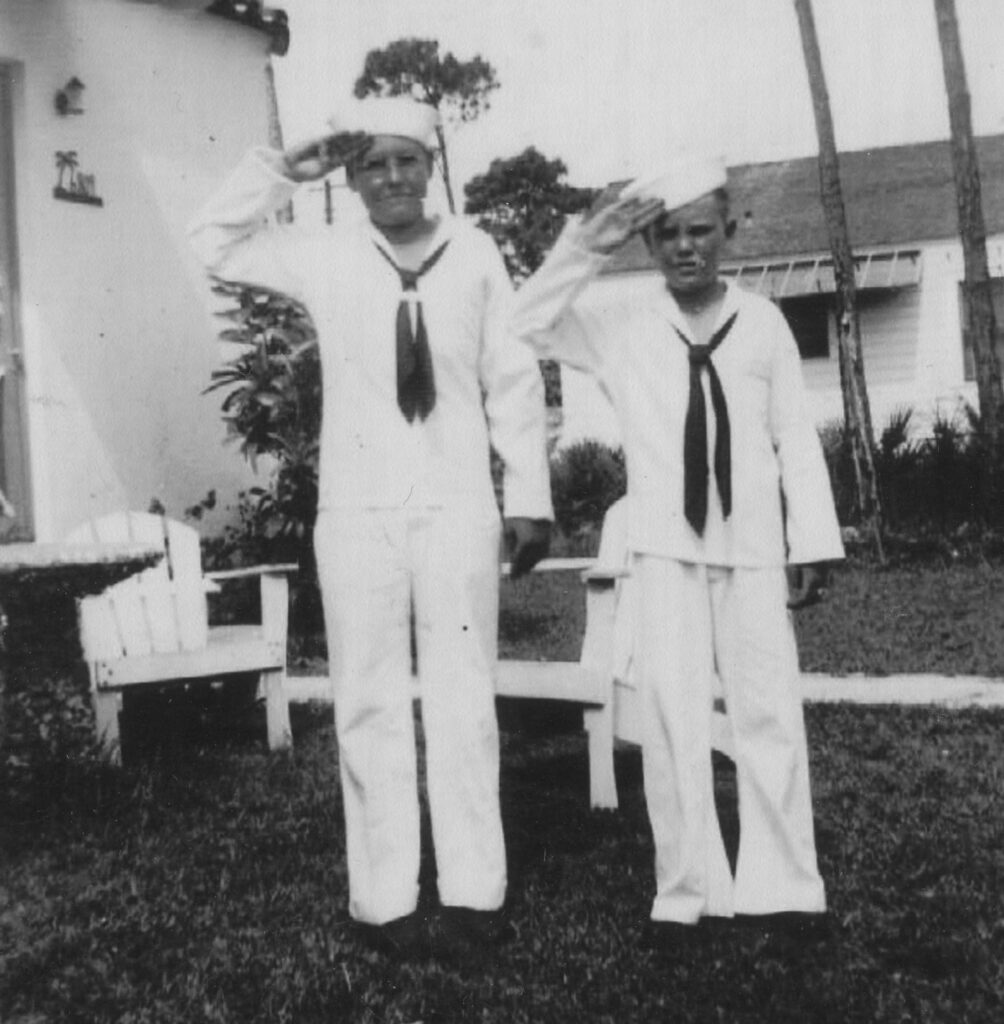 Miami Beach had Army Air Corps troops living in beachfront hotels and marching on the golf courses. Naval Air Station (NAS) Opa-locka was expanding to search for off-shore German submarines. Navy PT boats were being built at Edison High School. Lights were dimmed and windows blacked out. An army offshore artillery range was at Bal Harbour and a German POW camp was established across A1A in Bal Harbour. A lesser-known camp was located south of the Snapper Creek Canal and west of South Miami, the Miami Air Depot (MIAD), was operating from what is now Miami International Airport. NAS Banana River was being built near Cocoa.

Even before Pearl Harbor, Miami was being drawn into the war in Europe. The newest British navy heavy cruiser, HMS Exeter, came to Miami on its maiden voyage. While the Exeter was docked at the old P&O docks in Miami, the German battleship Graf Spee was observed sailing south in the Atlantic off the coast of Miami.

The Exeter was immediately alerted to give chase. Unfortunately, due to an extremely low tide, the Exeter was held fast in the mud of the Miami harbor. Ultimately, the Exeter was freed and it found and damaged the Graf Spee off the coast of South America, forcing the German captain to scuttle his ship.

At about the same time, Pan American Airways was engaged in clandestine flights from Miami across the south Atlantic to support the British in North Africa.

I was 11 years old. My best friend, Alan Borden, also 11, and I watched the buildup for war and were unhappy that we were too young to join the Navy. Alan’s father, Capt. Harold Borden, skippered the Isle of Normandy, a tug boat owned by Reed Marine Construction Co. on Biscayne Bay and the Miami River. Alan’s parents, Harold and Mary Borden, and my parents, James and Robbie Capley, had moved to Miami in the late 1920s.

One day, Capt. Harold told us the Navy had directed all civilians working on and around the bay and river to register with the Navy and obtain a civilian ID card. The Navy was concerned about saboteurs from offshore German submarines attempting to land in the area. In fact, there were rumors of a German shore party being captured in northwest Miami. Alan and I decided the registration requirement must have applied to us since we were sailing on the bay in Alan’s sailboat almost every day.

The following Monday morning, we walked from our homes near Edison High School to 62nd Street and boarded a Miami Transit Company Blue J bus to downtown Miami. We presented ourselves at the Office of the Commander of the Seventh Naval District Headquarters in the DuPont Building. We were escorted into the commander’s office and he very graciously informed us that the rule really was intended to apply to adults working around the bay, but agreed that we could be registered. He informed us that the actual registration was being done by the Coast Guard headquarters located on the Miami River near Bayfront Park and that we should go there.

We were received by the Coast Guard commander. Of course, he had been called by the Navy commander and alerted to our coming. We were received with great ceremony, fingerprinted, photographed and issued very impressive Civilian ID cards. Those cards were our proudest possession throughout the war years.

Alan Borden is now retired as an electric contractor estimator and lives in Coconut Creek. Gerald Capley is an attorney, retired from Pan Am, and lives in Melbourne and Hendersonville, N.C.