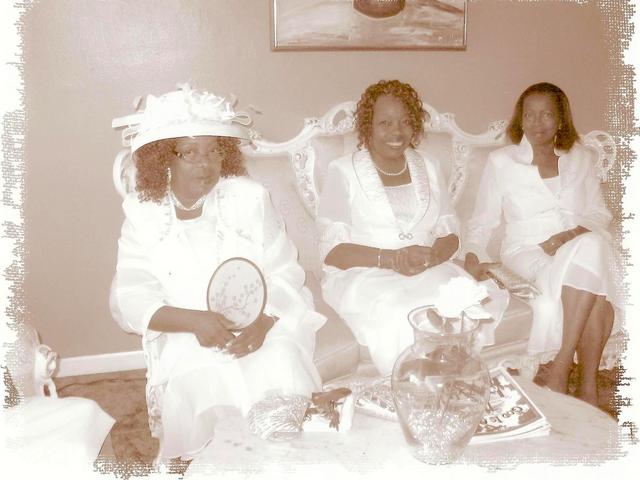 Back during the mid-1950s, my parents migrated from rural Georgia, with five young kids in tow. Seeking a better life with more opportunity for their children, they sold most of their possessions, left family and friends behind and struck out for the big city.

Getting to Miami was quite a journey for us, with many stops along the way. But there was no doubt that our destination was Miami.

We arrived during the summer of 1955. For an African-American family, there were still many limitations in place at that time, barriers that would literally take years to come down. As young kids, we didn’t really understand it all.

My parents would often sit us down and try to explain to us about the harsh realities of life during those times. My father would tell us stories of his life and the many things he’d gone through as a young black man living in the Deep South. Now, living in this strange new city, they kept us very close, not wanting us to ever fall into harm’s way. In spite of this, they were determined to make the most of our new life.

We moved in with my mother’s older sister in Coconut Grove, where my aunt Irene lived in a small duplex just off Grand Avenue. We were all packed into this little two-bedroom duplex, and my aunt made pallets for us kids to sleep on in the living room. It was like a slumber party every night; we had so much fun.

I was third from the oldest, barely 5 years old, but I have such vivid memories of those days. Everything was a new adventure for me. I’d never seen a palm tree before, and I remember seeing my uncle open a coconut for the very first time. My aunt used to make the most delicious coconut candy. Some evenings we would walk up to Grand Avenue just to watch the traffic and see the hustle and bustle of the city.

We soon moved into our own apartment, just off U.S.1 in Coconut Grove. By that time, my father had landed a job working for General Tire Company in North Miami Beach.

My mother was attending nursing school at that time. With five small kids at home, that was not an easy task. My mom did eventually graduate and began working at Mercy Hospital.

There were times when my dad’s car would break down and my mom had to pick him up from work. She would let us kids tag along just for the ride. For us, driving down Northeast 163rd Street was like touring a vacation paradise.

I remember seeing the tourists walking around and frolicking in the pool at the Howard Johnson’s right at the cloverleaf interchange. There was a McDonald’s just down the street (that McDonald’s is still there) and sometimes mother would stop in for a rare treat.

I began first grade, with great reluctance, at George Washington Carver School. I hated school and would have preferred to stay home with my mom watching Captain Kangaroo or Popeye’s Playhouse.

Over the next few years we moved a few more times, until we were settled a bit further north, in an area called West Little River. My parents purchased the most beautiful and spacious home (at least to us) – three bedrooms, two bathrooms and a Florida room. We were in heaven.

We invited friends over and our cousins would sleep over sometimes. By that time, my older sister had married and moved out. I was in middle school by the mid-1960s and had made a few friends, and those relationships lasted many years after high school. I’ve known my closest and dearest friend since second grade.

By then, school was a lot of fun, and I had some of the most wonderful teachers. I especially enjoyed the many field trips to so many exciting places in Miami – the Science Museum, Parrot Jungle, The Serpentarium, Tropical Hobbyland, Crandon Park Zoo and Miami Seaquarium, just to name a few.

My parents really never had a lot of money, but they did manage to give us the most memorable childhood. Thank goodness it didn’t take a lot of money to have a good time in those days. There was always something to look forward to.

We were rewarded with spending money for doing our chores and helping out around the house.

My sister and I would take the Number 25 bus all the way downtown to go shopping. That was such a fun ride. We’d have lunch at one of the dime stores like Woolworths or McCrory’s lunch counter. Those charbroiled cheeseburgers and root beer floats alone were worth the trip. Other times, we’d enjoy Saturday afternoons at Virginia Key Beach with a big picnic basket.

If there was a new movie out, my dad would load us all into the car and head to the drive-in theatre. We wore our pj’s and made our Jiffy Pop popcorn before leaving home. It was so wonderful back in those days with so much to do.

By 1969, I was a senior at Miami Central High and ready for graduation. I registered at Miami-Dade Community College North campus and started work for the telephone company, a job that lasted more than 25 years. Both of my parents and three of my siblings have now passed on, my mom most recently.

Today, my husband and I are still enjoying life to the fullest here in Miami. More than 50 years ago, my parents wanted to provide a better life with more opportunity for their children in Miami, and I must say that was accomplished, many times over.

Today, I enjoy cooking big meals and having my children and grandchildren over to visit. That says it all. Life is great because the best time is now.