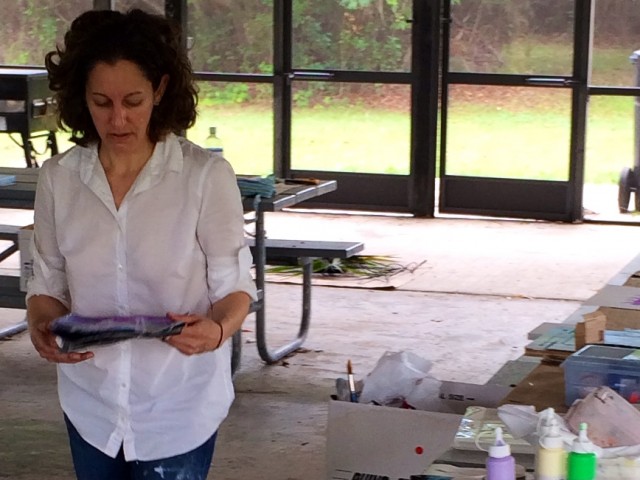 It feels like a high speed chase west on the ironically named Dolphin Expressway, veering south on what follows as a seamless string of highway on the “Palmetto,” the Don Shula expressway, and the Ronald Reagan Turnpike, all certifiable assaults on the nervous system.

I pass hurling arcs of overpasses and barrier walls painted in something vaguely resembling sandy or sunset colors. After the Walmart /Home Depot/BJs/ Outlet Center super-section in Homestead, I hook onto U.S.1 southbound and I’m off the highway, in Florida City, closer, at least, to what will become familiar territory for the next month. This drive is happening in May 2014 when I spent the month living in Everglades National Park as part of the Artist in Residence in the Everglades (AIRIE) program.

On the way down, I travel the familiar traverse on State Road 9336, past produce distribution centers, dollar stores, Mexican restaurants, and a church with a gigantic cross reclining on a grassy man-made berm.

As I near the park, the vista opens up at Southwest 192nd Avenue with wide agricultural fields. I can smell the fertilizer. I continue south, turning west at the state prison, past the well-kept migrant workers’ housing, and a small nondescript house with a large driveway that becomes a lively taqueria on the weekends. The variety continues past the Benito Juarez Park, a cluster of orchid growers, agricultural land for sale and a straight shot west across the C-111 (a canal originally built in the 1960s to transport Aerojet moon rocket engines so big they had to be barged). In a few minutes I arrive at the offices at the Ernest Coe Visitor Center to check into the cabin I will call home during the month of May.

My cabin quickly becomes home base after mopping, unpacking and re-arranging of furniture. It’s a piece of a larger housing settlement for park employees, built as part of “Mission 66,” a federal program begun in 1956 to improve the buildings in the national park system after the post-war visitor boom. The project introduced the concept of the visitor center, building the mid-century structures at Flamingo and the observation tower in Shark Valley.

I set up a field office with maps, a coffee machine, and a bottle of bourbon. I dine outdoors for the first two weeks, before the rains start and the mosquitoes emerge with ferocity. I continue the domestication and colonization of my immediate surroundings by setting up a studio in the large screened porch called the “chickee,” using the long string of picnic tables for painting, collaging, and journal-keeping.

Portions of the land-bound park have been domesticated as well, keeping us people in check, by making this subtropical nature preserve accessible through paved roads, cleared trails, and lovely laid-out paths such as those at Anhinga, Gumbo Limbo, and Mahogany Hammock. These carved out areas of accessible nature are places I frequent, and they feel part of my extended “house” in the Everglades.

But most of the park is water. Days I spend on a 24-foot flat boat, in the western boundary of the Everglades via the back-country waters, were glorious ways of experiencing a landscape untethered from the pace of the other coast. I saw rare orchids and animals. I learned that Martha Stewart laundry bags are a favorite for catching live pythons, and about the difficulties of detecting the invasive species with conservation drones (in part, because their body heat is close to the ambient temperature).

The trips were also archaeological tours, past ancient Tequesta and Calusa mounds, homesteaded settlements, factory remains, boat wrecks, shards of what might be pottery, and the hydrology stations themselves.

Tamiami Trail is my route to exploring another network of national, state and local preserves. It’s effectively a dam blocking the natural freshwater flow to the Everglades. At the time I’m there, a one-mile portion has been recently elevated to allow water flow as part of the restoration initiative. The road’s bridging, along with the canal structures and air-boat vendors, are all a part of the constructed landscape.

I’d originally intended to write more about the sublime experiences from within the park, too many to name — things like the bright lime green color of the coastal prairie in late May, or looking for meteor showers at 2 a.m. in Taylor Slough, or the slithering landscape of black snakes and mangrove root systems on the Bear Lake trail, where I was swarmed the first day after the rains started because I didn’t have a clue how bad the mosquitos could get (I counted 95 bites that night).

But my time weaving in and out of the designated park area made me acutely aware of the human intervention that allowed me to navigate these parts, and how we were alternately destroying, preserving, or trying to reconstitute this ecosystem.

My proximity to this part of the Urban Development Boundary gave me a more immediate sense of how the park was pressed, controlled, and restricted from every which way. Wilderness here is a construct, a negotiation between a real need for these sacred places of refuge for all sorts of creatures (including the human sort) with the political and economic imperatives required to make it happen.

I had taken countless photos of the landscapes that never matched up to the experience of being there. Yet I came to see my seemingly boring and repetitive pictures as historic glimpses into this particular version of the Everglades. Past versions included homes to ancient Indians, and later, 19th Century homesteaders. Previous iterations were experienced and impacted by loggers, speculators, mid-century vacationers, and invasive species of all sorts that had become native.

Ten thousand years ago, it was land still under the ocean. It is a landscape that has experienced all sorts of system collapse, but exists in a form that still protects and connects to some deeper part of ourselves.