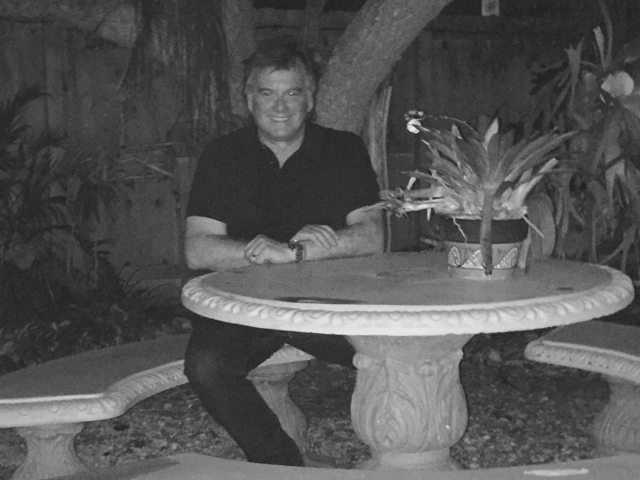 “In the Everglades there´s a way of life.

There´s a way of peace without stress or strife.

There´s a natural danger and a man to face.

Lincoln Vail of the Everglades,

The man on patrol in the Everglades.”

Before there was Flipper, before Gentle Ben, way before Miami Vice, there was Lincoln Vail of the Everglades.

Vail was one of my first childhood heroes. The television show on which he appeared was called Everglades and it was also among the earliest television programs to be filmed entirely on location in South Florida.

In the early sixties, having only recently arrived from Cuba, my brothers and I learned about life on the “River of Grass” and about good and evil from watching the show. I even started learning English with Vail. One of the first phrases I picked up in my adopted language was, “This show brought to you by…” Who says TV is not educational?

I sometimes thought that the only people who ever watched the show were my brothers and me, as nobody else seemed to remember it. Vail was a law enforcement officer in the Everglades. He patrolled his territory aboard an air boat, defending it from criminals, poachers and other evil-doers. I clearly recall the words and music of the excellent theme song, which I have always been ready to sing for unsuspecting and usually unappreciative audiences.

In later life, I sometimes asked friends, acquaintances and even perfect strangers who were about my age if they remembered the show. If they seemed at all interested, I would even burden them with my rendition of the theme song. To my surprise, it would be a long time before I found anyone who remembered the 1961 series.

In the mid-nineties while attending a nephew´s birthday party at Gator Park airboat rides out on Tamiami Trail, I asked the attendant, who was about my age, if he remembered the show. With a bored look, he told me he was from New York. I suspected that he was thinking that I should “get a life.”

In that pre-Internet age, I set out to find whatever information I could about the show. I wanted to confirm that we had not imagined the whole thing.

My initial efforts led me to the Miami Herald archives, where at least I was able to find the TV listing for the program. It was shown on Sundays at 6:30 p.m. on Channel 4. The librarian suggested that I try the Wolfson Media History Center. The technician for film and video archives at Wolfson, who was extremely helpful and understanding, had grown up in South Florida but had never heard of the show. He was, however, able to send me some information. He also referred me to the Florida Department at the Main Library. Here at last there would be a break in the case.

At the Main Library, I spoke to Steve and explained what I was trying to do. To my delight, he immediately said, “Oh, Lincoln Vail of the Everglades!” and proceeded to recite the words of the entire first verse of the theme song. (There were two verses.) He asked me if I knew the name of the lead actor and then said, “No, no, I remember… it was Ron Hayes.” I knew this already, but I was very impressed. It was exciting to finally find someone who remembered the show. He recalled the day and time when it aired and said he thought it was a great show. At that moment I thought that perhaps Steve should also get a life.

Everglades was a syndicated program distributed by ZIV-United Artists, made by Schulberg Productions and actually filmed on location in the Everglades. It premiered in October 1961. As Steve correctly remembered, Lincoln Vail was played by Ron Hayes, who was described in one review as “a distinctive young actor”. A total of 38 episodes were made.

Thanks to information provided by the library, I discovered that all of the episodes were still in existence. They were on 16mm film and stored in the archives of the Wisconsin Center for Film and Video. I called the center and asked if there was any way I could view the shows. They said yes, but that I would have to obtain permission from the owner of the programs.

The owner turned out to be MGM. I went as far as writing a letter to MGM´s Legal Affairs Department and made the request. They responded that it was “not their policy to authorize screenings for such purposes.” My purposes, while honorable, were not particularly serious.

The first episode was called “The Escape” and featured a then-unknown actor in an uncredited role. That actor was Burt Reynolds. The episode dealt with Lincoln Vail´s efforts to recapture a convict who had escaped from a road gang. It turned out that the convict had run off to be near his dying father and help his impoverished wife and child. Vail caught the “cracker” criminal, but with what was described in one of the reviews as “too much innocence.” This all sounded pretty good to me. The critics rated the show as “a notch or two above the standards of its breed.”

I have sometimes wondered why the memory of this particular show has stuck in my mind the way it has. I now think that I would have loved for my three boys to have enjoyed a show like this when they were growing up. I wonder which show or shows they will remember in a similar way when they get to be my age.

At the risk of sounding sappy, perhaps that was a more innocent time. At least the very survival of the Everglades was not in question then. It would be very sad if rather than being a quaint piece of “Floridiana,” the show would come to serve as a celluloid record of the Everglades that once were.

One of the reviews I was able to find said that the show “suffered, when it suffered at all” from excessive talk and “from the effete theme song, which it would be better done without.”

“As they fight for rights,

and the homes they make,

simple grassroots people of the Everglades,

there´s a fellow there who protects their rights,

Lincoln Vail of the Everglades,

The man on patrol in the Everglades”