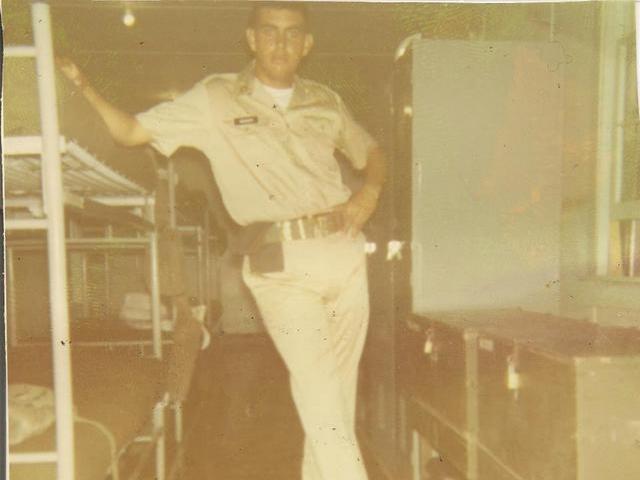 My Miami story began the day my KLM flight touched down from Cuba at Miami International Airport.

I was traveling alone in 1961 at the age of 11. I was going to some unknown destination, which turned out to be an orphanage in Colorado, arranged by Operation Pedro Pan. I was reunited with my mother and two younger sisters almost two years later in Miami (we were some of the lucky ones).

We moved into an old wooden house near Shell’s City. I was enrolled at Edison Junior High in the seventh grade in 1963, and later I went to Beach High (Miami Beach High School). My mother was now a single mom raising three kids in a new country with a new language.

My first job was delivering The Miami News around Lemon City and Little River. Adjustments had to be made to my bicycle by installing a wooden “banana basket” to the handlebars to accommodate the heavy load from the newspapers. It felt as if I were peddling a Buick. My introduction to mobile journalism drastically ended the day my bike fell apart into several pieces and I had to walk back home in the rain carrying the wheel and frame in one arm and the chain and handlebars in the other. No more banana basket. I was 14.

Another job came up where I was allowed to take the company car home. That was great news because my family needed a car. The pest control company was on the beach. I was hired as a “pest control specialist.” I was the only employee and was told to come back the next day so they could show me around the “company car,” a ’56 rusted four-door Packard.

The windows did not roll down and the car had no air conditioning, making the smell from pesticides and other chemicals suffocating. I sprayed the Seacoast Towers on Collins Avenue, and for the first time —as bad as it was —the family had a car. Nobody bothered to check my driver’s license. I didn’t have one. My mother must have fainted the day I got home behind the wheel of my new, smelly, beat-up company car. I was 15 years old.

We hung out at pool halls, dance halls, movie theaters and food joints in North Miami and Miami Beach. Congress pool hall and Bowlerama come to mind. I will never forget the Paramount Theater, where we skipped school to see A Hard Day’s Night. No more short hair for me after that.

Flirting with girls up and down Collins Avenue became an art form; we cruised past the Neba Roast Beef restaurant, Scotty’s Drive-In and The Castaways. I remember getting my first Beatles haircut from the master known as Evan at a cost of $5. Among our favorite eateries were Parham’s, Royal Castle on 71st Street, Tony’s Fish Market, Nathan’s, Fun Fair, the Bonfire, The Place For Steak, and Jilly’s when we were a little bit older.

We watched Wayne Cochran lift the roof off The Barn. The Hialeah Municipal and all the armories were great venues that showcased Miami’s local bands like NRBQ, the 7 of Us, The Kollection, and many others whose memories are kept alive in Jeff Lemlich’s book, Savage Lost. Man, Miami rocked!

We grooved at Coconut Grove’s first head shop owned by the now legendary Michael Lang, one of the brains behind Woodstock. He had learned from his experience organizing the Miami Pop Festival in 1968 at Gulfstream Park in Hallandale. It headlined a not-too-well-known band called the “Jimmy Hendrix Experience.”

Finally, I found a real job at a well-known auto-rental and leasing firm in Miami with a large fleet of vehicles and a high-end clientele. Driving around and picking up people at the airport was part of my new job. I took a new car home every night. I remember pulling up to the “love-ins” at Greynolds Park in a new convertible every weekend, which made me extremely popular — a rich hippie. The job lasted almost three years. I knew it was only a matter of time until the U.S. armed forces’ Selective Service System would come knocking and drafted me into the U.S. Army. I was almost 19.

I was very lucky to have been permanently stationed in one of the most beautiful places on earth, Ft. Ord on the Pacific Coast Highway in the Monterey Peninsula of California. The Santa Ynez Mountains climbed up from Big Sur. There are not enough colors in an artist’s pallet to duplicate the sunsets I was lucky enough to see along the Pacific Ocean from my ocean-view Army barracks.

San Francisco was a short hop away from Ft. Ord, and on the weekends we hung out at The Haight (not what I expected) and saw a lot of the bands you only heard on the radio. I was having a great time, but sadly the ’60s were coming to an end and so was my Army obligation.

I had choices to make. “Going Back To Miami” was playing over and over in my head, and I knew in my heart what I had to do. It was time to come home. I have no regrets.