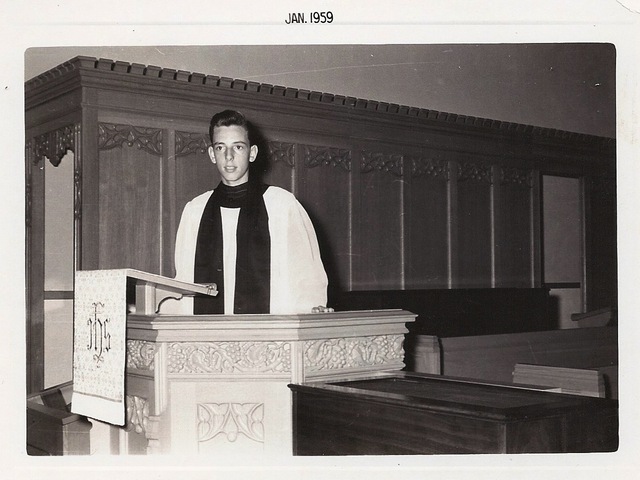 In the 1940s, my father Joseph Lanteigne Sr., worked at the Grain Federation League grain elevators on the docks in Albany, N.Y. My mother, Elizabeth Lanteigne, was a nurse at Albany Hospital.

Each morning, after returning home from working the night shift, Mom would turn on our black-and-white television set to watch the Arthur Godfrey show, which was broadcast from the Kenilworth Hotel on Miami Beach. Watching the sunny skies and the palm trees swaying in the ocean breezes fill the television screen, my mother would say, “This is where we are going to live.” After several bitter winters, our family packed up and moved to Miami in 1957.

My dad was employed with Dade County Parks Department at Matheson Hammock Park, and my mother worked for Dade County Juvenile Court and Domestic Relations in Miami. In the late 1980s, my mother was honored by the Juvenile Court, the only nonjudicial staff member to be so recognized. After more than 30 years of service, my parents retired from Dade County.

It was at our first residence, an apartment on Southwest 27th Avenue and Fourth Street, that my sister Andrea and I first experienced living in the South. It began when we took our first bus ride into downtown Miami on bus route No. 14.

My sister and I got on the bus and began to walk to the back of the bus. The bus driver instantly stopped the bus and in an aggressive tone told us to sit in front of the white line. That was just the beginning. Later that day we saw separate seating at the dime-store lunch counter, and separate drinking fountains and restrooms.

I was an acolyte at the 8 and 11 a.m. services at Holy Comforter Episcopal Church, located on Southwest First Street and 13th Avenue. Between services, Father Garret would take me to Tyler’s Family Restaurant on Flagler Street for a hot Danish pastry.

Miami High was a wonderful experience back then. The school’s architecture allowed for the Miami breezes and the noise from the planes passing overhead to flow into the classroom.

The auditorium was the home of high-energy pep rallies for games against rivals Jackson, Coral Gables and Edison high schools. The Orange Bowl football stadium hosted more than 40,000 students and family members for the annual Thanksgiving evening football game between Miami High and Edison.

In the summer of 1957, I applied for my first job, at the Dade County School textbook distribution center and warehouse on Southwest 22nd Avenue and Fourth Street. This is where I spent my summer days during my high school years. I also worked in the evenings at the Coral Gables Country Club.

Living and growing up in Miami during the late 1950s and early 1960s was full of wonder. In the winter, we’d wait for the big black vultures’ annual arrival to roost at the Dade County Courthouse from their summer home in Ohio. That was a sign that the Burdines department store Christmas carnival was going to be set up on the roof of the downtown store soon.

On Saturday evenings, we’d often eat dinner at the Shrimp Place on Northwest Seventh Avenue. We’d stand outside hoping to be able to see the Russian Sputnik in the evening sky. I remember the excitement felt when our first space shot was successful. Even more exciting was when our first astronaut in space, Alan Shepard, lifted off from Cape Canaveral. That was an era of great American pride.

The later 1960s and 1970s had their share of history in Miami. There were political conventions held in Miami Beach that sparked civil-rights and anti-war demonstrations. Miami faced many civil-rights demonstrations during that time period, which greatly changed our community, as did the later arrival of the refugees from the Mariel boat lift.

Shortly after the assassination of President John F. Kennedy, I enlisted in the United Sates Army. While in the First Infantry Division at Fort Riley, Kansas, I volunteered as part of the division’s advance to Vietnam.

When I returned home, I became an internal auditor at the First National Bank of Miami. Later, Southeast Banking Corporation was incorporated and I was asked to transfer and become one of the first employees of Southeast.

My passion for banking began. In 1969, I attended Miami-Dade Junior College, and then transferred to Florida Atlantic University, graduating with a degree in accounting in March 1972. I returned to work at Southeast Banking Corporation in 1974, and it was there I spent the last 20-plus years. I retired in 2013 as president of Mercy Credit Union, located in Mercy Hospital.

My wife Linda Blondet Fondas Lanteigne graduated from Immaculata-La Salle High School in the 1960s. She knew as a child that she wanted to be a teacher. Linda graduated from the University of Miami with her degree in education. Her first marriage took her to the Bahamas where she taught for 15 years.

When she returned to Miami, Linda began teaching first grade at St. Brendan’s, then Blue Lakes, Coral Reef and Kenwood elementary schools. For the last seven years, Linda has been a first-grade teacher at Pinecrest Elementary School.

For the past 18 years, we have lived in our High Pines 1952-vintage home. The first several years, we spent long hours remodeling to ensure we could retire in our home. We were always careful to maintain the integrity of the original house. We now spend most weekends taking care of our tropical garden. Lots of time is spent with Pee-Wee and Chi-Chi, our special Quaker parrots, and Buddy, our faithful Maltese dog.

Miami has gone through major growth and dramatic changes. There is still no place better to see the blue sky and feel the warm, gentle winds. When asked where we are from, with pride we say Miami. Miami is an unbelievable place to call home.