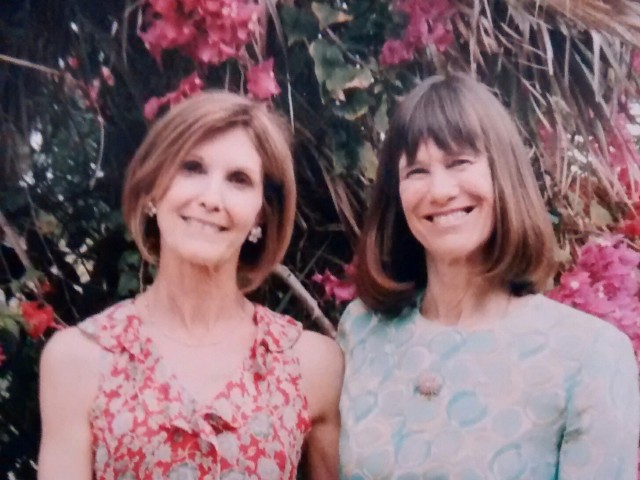 Suddenly there is fire in the treetops along the turnpike. The sidewalk is carpeted with orange petals and the Poinciana preens itself above the jacaranda’s demure lavender feathers and the frangipani’s pink and yellow pastels. The calendar doesn’t tell us it is time for our yearly Poinciana Walk, but the world does. While we go for the sake of the trees, the homes in the Gables that they guard and grace have become characters in a never-ending story.

On one of our earliest peeking-through-the-Rangoon Creeper days in the French Village, we stumbled onto the storybook house at the southwest end of the block of chateaus. Double garage doors and peeling white paint abutted the perfectly restored wall and manicured yard we had been admiring. A diminutive arch with a black iron gate opened out diagonally to the corner of the street from a postage-stamp herb garden. Above and below, casement windows hinged inward, screens offering only the filmiest filter. The wavy glass panels of the butler’s pantry cabinets were clearly discernible from where we stood outside. Farther down the walk, a vase of fresh flowers bloomed in the window, and next to it a gray top-knotted head was turned toward the flickering screen across the room. We were mystified and mesmerized by the house, a vestige of the neighborhood’s 1920s legacy. We ached to get inside.

Then, one afternoon, we rounded the corner to hear the sounds of pans scraping through the kitchen’s casement window. Pungent garlic and onions sizzled on an unseen stove top, and plates clattered on an imagined table. Two shadowy figures floated in the lampless kitchen, one seated and one busy in the evening light lingering along the freckled street, while a gray head watched at her post, as always, next to the flowers in the living room window.

Months later, as we paced back and forth along the length of the house, by now the object of fantasy and imagination, two wiry little ladies appeared in the open door and looked out at their stalkers. The tiniest one, with delicate bird fingers, pushed open the wrought iron, screen-covered door and smiled at us. Her face was encircled with a white cottony halo and the parchment skin on her face creased into smile lines from her eyes to her chin. The woman behind her seemed younger, more serious and stern, or just responsible and justifiably wary. “Hello ladies,” The snowy one spoke. “Are you enjoying your walk?”

We were nearly speechless. For all our wishing, we weren’t prepared for this sprite to actually speak to us.

“We think it is pretty special, this house. That’s why we have stayed here all these years. Of course, the Realtors won’t give us any peace. They come by here nearly every day.”

“You aren’t going to sell it are you?” Our simultaneous question belied fears of contractors and realtors circling like vultures.

A little giggle slipped into the pixie’s voice. “Would you sell paradise?”

The taller woman reached out for the handle of the iron door and began drawing it toward her and closing the little doll lady inside. “Enjoy your walk.” She gave a tiny wave, her open palm nearly as papery as her face. A walk in paradise.

Today, perhaps because we had already walked on many streets, we drove to Cotorro Avenue, turning in from the northern end of the French Village block. Maybe if we had been on foot, the awareness would have come gradually. Instead, we were shocked to find the Garlic Sisters’ house standing naked on the sidewalk. The grizzled hedge, ripped from the ground, exposed ancient pipes and spigots that had quenched its thirst for perhaps as many years as we were old. The Florida honeysuckle vine that circled and wound and draped luxuriously over the garden wall was now twisted dry and gnarled in the side yard under piles of debris, boards and nails and chunks of plaster.

Tears blurred our vision, but we scarcely hesitated to duck through the arch and tiptoe gingerly around the rubble that had once been a garden, to French doors, standing open in the back. We stepped through onto original tile floors, terra cotta cool, and looked up to a black, wrought iron chandelier dangling above. Straight ahead, the wood paneled front door, directed a turn into the living room where a TV antenna wire dangled onto the floor.

Off the front hall, a door stood open to the kitchen where black and white tiles checkered the floor. In the empty butler’s pantry, wooden drain boards, grooved and stained, sloped down to an old porcelain sink with iron faucet and knobs still intact. On the drain board stood a vase of flowers, once fresh cut carnations, daisies, and spider pompoms, now drooping with curled and wilted petals. Not the stuff of potpourri, but of memories.

A simple ribbon circled the vase, its color indistinguishable. A florist card stuck out from a stiff plastic stem. The envelope was addressed to Virginia O’Dowd, 1032 Cotorro Avenue, Coral Gables, Florida. Dreading to see what the message would say, fearing a get well wish or sincerest sympathy, my hands shook as I turned over the card. The typed letters read: Happy Birthday, with Love.

Outside, a child’s riding toy rumbled by, a stroller wheel complained and young women’s voices drifted up through the pantry casement. Neighbors. Maybe they would think we had no right to be there, to find the flowers, to sniff for garlic, to walk over dining room tiles the sisters’ feet had crossed and re-crossed until they wore a pattern in the stone, to listen for the echo of a little birdlike chirp. “Enjoy.” So we left the French door just as we had found it, passed through the garden wall, and whispered an apology to Virginia for not somehow leaving her flowers in the open window.