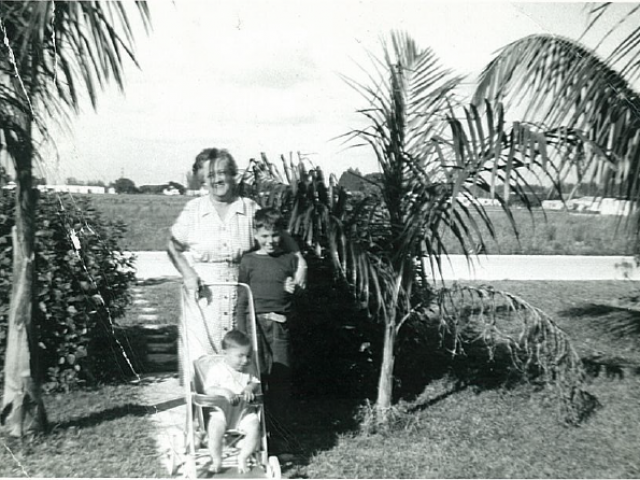 The MapQuest website ranks Hialeah as “the densest American city in terms of population not to feature a skyscraper,” and WalletHub rates it as 96th on its list of the hundred best and worst U.S. cities for an active lifestyle. But when I was a kid growing up there during the 1950s and ‘60s, the city was full of open areas that beckoned a boy to play.

When I was a toddler, I used to stand at the screen door of our house at 130 West 18th Street and watch the trains roll down the Seaboard railroad track three blocks to the north. There was nothing but the gravel street and a big field between us. Fascinated, I’d watch the action for so long that I’d leave a puddle by the door from my wet cloth diaper, so I’ve been told.

Beyond the tracks were some factories, and beyond the factories some greyhound kennels and a stockyard. When the wind was from the north, we could hear the dogs barking and smell the cattle. One day when I was older, there was a jailbreak from the stockyard, and dozens of cattle escaped, running wild through the streets of the city. We first became aware of the situation sitting in our classroom at St. John the Apostle School late that morning when a steer ran down East 5th street followed closely by a police car, lights flashing. We broke out laughing until our principal, Sister Consolata, came on over the P. A. to say that recess had been canceled due to the danger. Recess canceled? Not funny at all! Some of the cattle had to be shot, and for three or four weeks afterwards, I would bike a few blocks from my house to stare in awe where a dried pool of caked and cracking blood stood gradually dissolving in a storm drain on Red Road.

Yeah, Hialeah was a wild place, and there was plenty of room for a kid to play. The closest was right next door in “The Lot,” where there was a single wobbly wooden basketball goal on the west side and a raggedy baseball diamond on the south end. The football field went from home plate to the ficus tree in left field.

Of course, more and more houses were being built every year, but there was still a lot of open space. One of these open areas was a big isosceles triangle of low land bordered by 19th Street and Bright Drive that became a boggy acre during periods of rain. That was the place to go to catch frogs. We’d keep some tadpoles in a bucket by the back stoop until they smelled and Mom would make us dump them out. Once, I got it into my head that I’d walk across the swamp on the stilts that Dad had made for us. I got about five strides in before I realized that I was sinking deeper and deeper into the muck just before keeling over into the muddy water. Mom was not happy about that, although she’d had three brothers growing up and understood a lot about boys and the trouble they get into.

Another place that remained undeveloped for a long time was a four-block area north of the 9th Street city waterworks. Although owned by the water department, the land was unfenced and mostly empty, so that was another place to have fun. At about 12th Street was “The Swing.” Somebody had shimmied way, way up a big eucalyptus tree and attached a long rope with a big knot at the bottom you could sit on. You’d climb out onto the horizontal branch about seven or eight feet up and have a friend heave the knot your way. You’d catch the rope, sit on the knot with the help of your fellow branch-mates, and swing in a fabulous arc, feeling the G-force compress and then lighten in your chest as you reached the point farthest from the tree. On the return, you could have the kids on the branch catch you and set up a new rider, or you could just enjoy several decreasing arcs till you dragged your foot, stopped, and threw the rope back up for the next swinger.

There were a couple of other things you could do by the waterworks, too. There was a big, grassy, flat-topped mound, “The Hill,” that apparently had something to with the water system. The Hill was great for sledding down on pieces of cardboard, and since Dad sold appliances, we could always get him to bring home some refrigerator boxes. We could be just like those kids up north, with all their fancy snow. At the base of the hill were stacks of big water-pipe sections in which we could play hide-and-seek. But there were lots of other places we could play that.  There was only one Hill.

Another place that was late to be built on was a block of trees and underbrush between West 2nd and 3rd avenues. The vegetation was so dense that you could stand on the 20th Street sidewalk, grab a branch of Florida holly, get a foothold on a trunk, climb up, and travel by tree all the way across the block, not touching down till the sidewalk on 19th. Of course, you’d get holly sap all over your clothes. Once again, Mom not happy, but it was worth it, and in her heart, she understood.

The best place, though, was my own secret retreat on that same block. I’d go there only by myself, park my bike a little way in, climb my particular tree, sit there and think, on the shore of the wide world alone—lost in reverie, surrounded by the wilds of Hialeah.