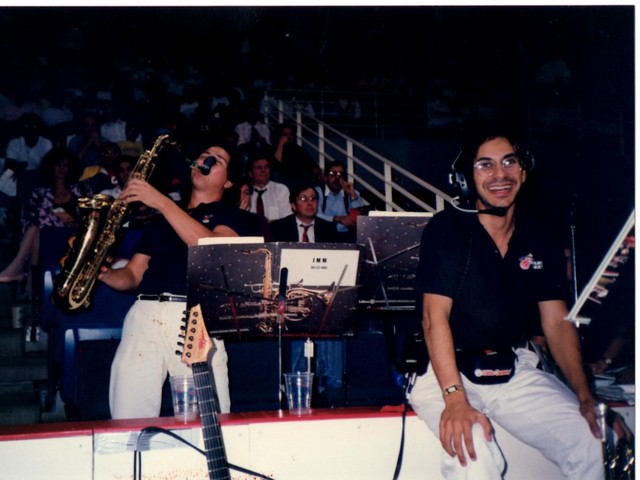 I played for the Miami Heat for their first three seasons. Yet not one Heat fan knows my name, although they may recognize my face.

It was spring of 1988, and I was the music director on Norwegian Cruise Line’s MS Southward.

I have been a newspaper junkie since my days as a paperboy in my hometown of Knoxville, Tenn., and Sundays were our “Miami Day” – time to load up with a new crop of passengers, and my chance to grab a Sunday Miami Herald. I read with great interest the article outlining the NBA’s approval of a new team for the Miami market.

I was on my fourth year of working on ships, and starting to crave a “real” life. This was my chance to make a move. And as luck would have it, my ship contract was coming to an end. I contacted the Heat front office . For weeks, I kept calling – and I finally convinced them the team would probably not be very competitive the first season, and they needed a band to keep the fans entertained.

They finally relented and set up an audition, as they said several other bands had contacted them. The window of opportunity was open, but the rest of my band was on board the Southward, in the midst of a four-month contract. I had to act fast – the audition was four days away. Luckily, I ran into several great musicians playing at Bayside Marketplace. I told them about the opportunity, ran back to my new apartment on Collins and 29th Street, and spent the next two days furiously writing arrangements.

I rented a rehearsal studio, we got four songs under our belt (“25 or 6 to 4,” “The Heat is On,” “Wipeout,” and “I Feel Good”). We arrived at the mostly-finished pink Miami Arena, and won the audition! That first Heat Band consisted of Gary Mayone (keyboards), Rey Sanchez (guitar), Jim Kessler (bass), Ed Smart (saxes), Kelly Milan (trombone), and me on trumpet. Most of those guys are still around, enjoying successful freelance careers.

It was a great introduction to Miami, and I relished every moment of the first three seasons.

If you don’t remember, those were heady times for basketball: Michael Jordan was in his prime, Larry Bird and Magic Johnson were winding down, and Charles Barkley was as entertaining then as he still is. The band had a dressing room right near the players that we shared with Burnie, the Heat’s mascot, so interaction was easy.

Twenty-three years later, my band is still active, I am back in the cruise industry, and my wife Juliet and I have raised three children – Celia, Emma, and Given in this wonderful city now called home.

The Sumans currently reside in Miami Shores, and still root for the Heat, even though I am sure I am the only trumpet player released by a major sports team!