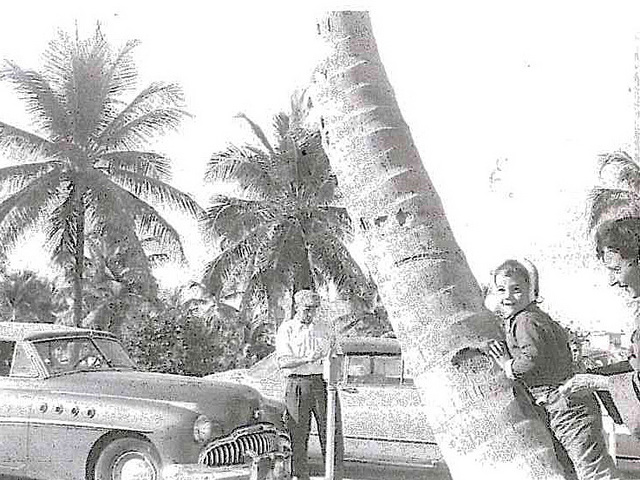 A vacation from my very first job in New York brought me to Miami Beach in 1952 where I stayed with a family friend, just blocks from the ocean.

“Aunt” Gertrude Reid, aka “Madame Zaza,” was a crystal-ball gazer who worked at the Kenilworth Hotel, where Arthur Godfrey did his broadcast. The apartment where I stayed was on 41st Street, down the street from the first Lum’s Restaurant.

The jitney ride from the railroad station to Miami Beach was exciting for a girl just off the train from New York. Miami is where I have stayed and raised a family, and they raised theirs here, too.

My decision not to return to New York caused my parents and grandfather to move here. I worked as a medical assistant for Dr. Koenigsberg in North Miami, and then for the Miami Fashion Council in the Chamber of Commerce building downtown.

I met and married my husband here that year, and we lived on a block off Miami Avenue on Northwest 55th Street in a furnished apartment with caring landlords, the Hollandys. The area was beautiful – a white duplex with palm trees painted on the front wall. There was a concrete table with umbrella on the grass next to the building and it was surrounded by beautiful hibiscus. My grandfather loved to sit there when he visited. He continually marveled at being in Miami.

My parents had a place near the bay on 26th Street. Mom and I wore hats and gloves when we went to Flagler Street, to Burdines Tea Room, or when we shopped at Oelkers for material to make hats and ate at the Town Restaurant.

Mal Marshall had a clothing factory on Miami Avenue (and occasionally allowed the public to make purchases) and we were introduced to the “Cubavera” style, fashion with a Latin flavor. Rome Mattress Company provided bedding for the area and Sterling Equipment outfitted restaurants.

Smitty’s Barbeque on 36th Street served pretty good food, and Edith and Fritz on Miami Avenue offered all-you-can-eat items for $2. Seven Seas couldn’t be beat for seafood. B-Thrifty was the grocery store of choice close by. In Hialeah, where my husband worked, there was another favorite place to eat, Steven’s (aka Whoppie’s).

Miami Beach offered treats like seeing Sammy Davis, Jr. as a very young man, dancing with the Will Mastin Trio at the Rockin’ MB Lounge right next to the beach, across the street from the Roney Plaza Hotel, and the Noshery, also on Miami Beach.

A move out west to Schenley Park brought us closer to Variety Children’s Hospital, ice cream at Milam’s Dairy and pony rides at Suniland Park. Hardware items were purchased at Salem Supplies on Douglas Road, and Mainly Art was the place for framing and supplies. The South Dade Jewish Center was born in the living room of Elsie and Joe Segal in 1955, later to become Temple Beth Am when the building went up in 1957.

A move farther west saw three children at Blue Lakes Elementary, Glades Middle School and Killian High School. We roamed horse farms, strawberry and tomato fields, the roads west to Krome Avenue, and south to Knaus Berry Farm. There was no charge to enter Matheson Hammock. There was easy, free access to the sea wall down at the Deering Estate off Old Cutler where snapper could be caught with little difficulty.

Shrimp cocktails on Key Biscayne at the Hurricane Harbor Lounge were $1.50, and Leonard’s La Pena on Bird Road served ONLY shrimp cocktail and steak. Whitey graciously showed you to your table at The Pub on Coral Way, where the lettuce wedge was huge. Sam & Carl’s Deli on Red Road was a favorite, too, serving a “Messy Bessy Sandwich.”

A trip into Coral Gables netted you delicious pastry at Andalusia Bakery, and there was Woolworths, and Jan’s for outrageous ice cream concoctions. Jimmy’s Hurricane on Bird Road, Chesapeake Oyster House in the Gables, and Perrine were popular restaurants.

My father worked at Steven’s Market on Red Road, and played cards with Abe Katzen, who owned the 5 & 10 Cent store on Red Road in South Miami. My mom worked at Stanleighs and at Claire Whyte, both on Miracle Mile. At one time, my parents owned Toni Lords, a gift shop on Southwest Eighth Street across from the Garden Restaurant.

My mother was a veteran volunteer. She and friends started the Park West Cancer Support group with help from David Blumberg. My mother was a “listener” at school, and on the phone with children who returned to empty homes after school, as their parents were still at work. My daughter worked at J Byron’s on Miracle Mile and then for Bernie Janis, who was a pioneer in West Kendall.

My sons worked at Nathan’s, KFC, and Kmart while in high school. They continued their education, married, and raised four children in Miami, with one set defecting to Coral Springs.

My husband was a successful businessman who loved music and art, fishing, and handball at Flamingo Park on Miami Beach. He and his partner in handball and business, Eugene Fleischer, built the José Martí building on Southwest Eighth Street, still there, with a ceramic map of Cuba on the west wall created by Fran William, a local artist of the day. They also built Westchester General Hospital for Dr. Maury Fox, and a division of the first Century Village in West Palm Beach.

My husband was active in Toastmasters, and together we were active in the Miami Power Squadron, and as docents at Metro Zoo for many years. We enjoyed opera at the Dade County Auditorium, and pizza at Santacroce near the University of Miami.

The third generation is on the rise in a wonderfully burgeoning Miami with its downtown/midtown revival and unique multi-cultural flavors.