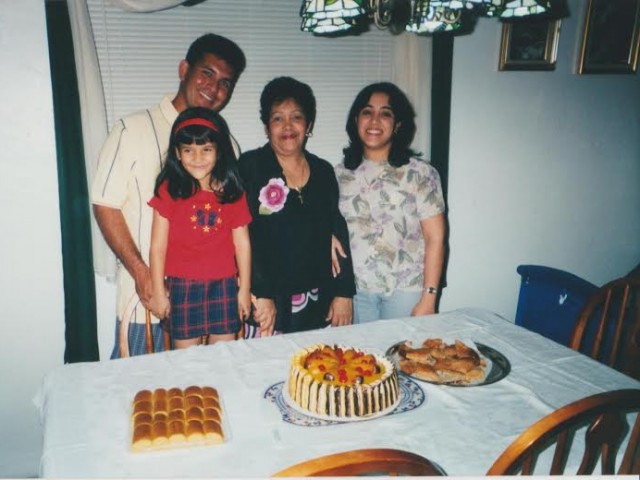 As I stroll through Biscayne Boulevard I glance up to see La Torre de la Libertad, a former political asylum center for Cubans. Although the Freedom Tower no longer carries out its administrative function, it continues to serve as a beacon of welcome for all Cuban refugees, those of the past and future.

The tower elicits few emotions inside of me, since I arrived from Cuba at the age of 3; however, it does remind me of both the triumphs and struggles my parents endured when settling in Miami in hopes of creating a brighter future for me, their only daughter.

My parents were among the influx of immigrants who arrived in the late 1990s. My father, Roberto Perez, arrived on a Friday in 1999. The following Monday, he began working as an electrician by day and cleaned restaurants as a busboy by night.

Six months later, my father found himself waiting in the airport with a bouquet of roses and a balloon that said, “It’s a Girl” (he still had not enrolled in English classes). Before he knew it, he was reunited with his young daughter, wife and mother-in-law. With a family under his wing, it was time to move forward at full speed; fortunately, my mother and grandmother were by his side.

Only a month after my mother Ani arrived, she eagerly began learning English at the Adult Education Center at Coral Gables Senior High School. She later enrolled in the REVEST program, an English class tailored to immigrants, at Miami Dade College Wolfson Campus.

While taking classes, she worked in the jewelry department of Service Merchandise. It was her first job in America, one she remembers clearly from soaking her feet in a bucket of hot water each time she came home from work.

The following year, she enrolled in MDC to take computing and accounting classes as well as ENC 1101. At the age of 30, she sat alongside recent high school graduates. While taking ENC 1101 in the day, she took on a night job as chief of data input in the Miami Jackson Adult Education Center.

My father also completed the REVEST program at night, while continuing to work as an electrician in the day. He continuously hopped from company to company in search of a higher wage.

Fortunately, my grandmother offered to stay home and take care of me so that my parents could work and further their education at the same time. My household valued what it meant to be a family. Even as a child, I realized the continuous interplay of teamwork among us. They figured that if they overcame the hardships of Cuba together, then they would surely overcome these times as well.

Once I was old enough to go to school, my grandmother Miriam Alderete was hired as a Spanish teacher at a private K-8 school, where she worked for 14 years. She was recognized by the Institute of Hispanic Culture with the Academic Order of Don Quijote de la Mancha award for her excellence in teaching Cuban literature.

No longer being able to bear going to work when I came home from school, my mother took her Florida teacher certification examination and was hired as a full-time teacher at Booker T. Washington Senior High. She woke up at 5:00 each morning for five years to avoid the expressway traffic heading to downtown; still, she thought it was worth it.

In 2004, my brother was born and so my mother transferred to Miami Sunset to be closer to home. She earned her master’s in mathematics education from Nova Southeastern University five years later. Soon after, it was my father’s turn as he earned his master’s in electrical, burglar alarm and fire alarm specialty.

While growing up, I saw my parents build a new home, a new life and even extend the family, whether it was by having another child or lending a hand to others so they too could build their new lives.

As refugees we cannot measure how grateful we all are to have been able to step foot in Miami and watch our lives unfold in ways we could have never imagined. However I am even luckier than my parents because I have been able to “stand on the shoulders of giants,” as Isaac Newton said.

My parents, along with other refugees, have played their own role in the building of the city, but most importantly they have laid the foundation for the next generation. They held our hands and carried us on their backs through the storms of adversity the new country brought forth only to steer us into calm waters, hand over the wheel and say, “now it is your turn.”