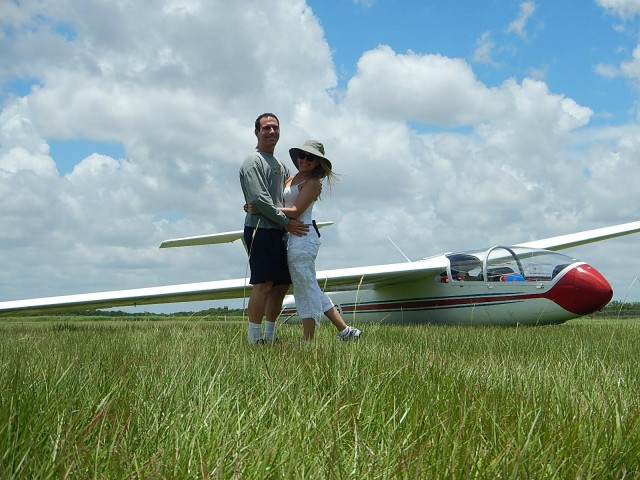 I reached to pull the yellow lever that would release our glider’s tether to the noisy silver crop duster that was towing us to 3,000 feet over Homestead at the edge of Florida’s Everglades.

This lever — and the towrope that connected us to the plane — was our only link to the powered flight. If I tugged the lever toward me, we’d be on our own in the ether, no engine, just a narrow white cylinder with wings relying on elusive warm updrafts to keep us aloft. My new boyfriend, sitting behind me and piloting the glider we had rented for an hour, had instructed me to release us from the crop duster — but I hesitated.

The origins of my fear of flying are a mystery to me.

I’d suffered life-long psychological paralysis surrounding air travel. Maybe this fear was the result of an association between flying and becoming motion sick at 7 years old as an unaccompanied minor on a flight from Miami to New York. Perhaps the dread was the due to being tossed around in a seaplane in a terrifying lightening-rife storm halfway to the Bahamas from Miami. Maybe a clue to my irrational fear could be found in the panic attack and vomiting episode just after take-off from Miami International Airport after drinking too many dirty vodka martinis in the airport bar in an effort to quell my terror of jetting to Philadelphia.

Over the years, I’d ridden almost every rail Amtrak travels. I’d taken the Queen Mary 2 to Europe and back over the North Atlantic, avoiding air travel and eating a lot of shipboard scones. I turned down free vacations to places in corners of the globe where it would have been impossible to travel expediently by land or sea. Amtrak doesn’t go to Malta.

The irony of my fear is that I’m an exotic-bird enthusiast, expert, and rescuer. I’ve written more than 30 books and hundreds of magazine articles on the care and training of parrots, canaries, finches, and doves. I’ve been a fan of birds since I was a little girl when my grandfather taught me how to charm pigeons to eat from my hands in the coop he built in the backyard of our South Miami home. Birds are the only animals with feathers, structures so strong they can lift a wearer many times her weight into the air for flight across oceans.

But I wasn’t a bird.

I found comfort in the terra firma. So how was I gliding over palm tree nurseries and sawgrass prairies at the edge of the swampy Miami wilderness in an engineless aircraft, being asked to pull a lever that would set the glider free? I hovered my hand over the T-shaped bar with its chipped canary-colored paint and thought about the risks of becoming unanchored and set adrift. What if the sky couldn’t sustain us? We were, after all, heavier than air, and unable to flap like birds.

My paramour is an officer in the Coast Guard based at the Opa-locka air station whose job is to fly helicopters over the South Florida seascape to spot Cuban migrants, save people from sinking boats, and pluck heart-attack victims and pregnant ladies in labor from the decks of cruise ships. He earned a medal for rescuing people from rooftops after Hurricane Katrina, an honor for which he is too humble. He teaches people to fly small planes and gliders and has a 4-seater plane of his own. There could be no one better with whom to share the sky.

I wanted to pull the yellow lever. I have a vague understanding of how wings work, but for the most part, keeping a 10,000-pound hunk of metal airborne seems like magic to me. What if I pulled the lever and we plummeted like a pelican into the sea?

The yellow lever was warm as I grasped it and eased it toward me. With a clunk the glider lost purchase on the towline and we separated from the noisy tow plane, leaving us alone with the only sound of the air whooshing over the clear plastic hood above our heads. Below us, houses with blue backyard pools gave way to tomato fields, which yielded to vast swaths of wetlands.

No hyperventilating into the vomit bag he had brought for me. No crying or hiding my face in sweaty palms. No whispered foxhole prayers that if I made it back to the ground alive I’d never eat bacon again.

“Let’s fly with the birds,” my boyfriend said, turning the glider sharply toward the hazy blue Atlantic.

He knew my weakness. He had told me that a great way to find updrafts—the fuel a glider uses to stay airborne — was to follow turkey buzzards as they swirled beneath the clouds, rotating inside an invisible funnel of wind. We flew toward three buzzards, their black wings outstretched, feathers gleaming in the sun. I forgot about being half a mile above the earth, instead focused on how close the birds allowed us to them, the communion we shared up there in the firmament. I forgot about gravity. I forgot that I was afraid.

Maybe my fear of flying isn’t about plunging to the ground at maximum velocity in an exploding tube filled with fire, as I had once believed. Maybe I just hadn’t met anyone until that moment that made flying fun, someone with whom I wouldn’t mind being set adrift. Experiencing flight with him had become, in a single gesture, with the pull of a yellow lever, more important than my anxiety.