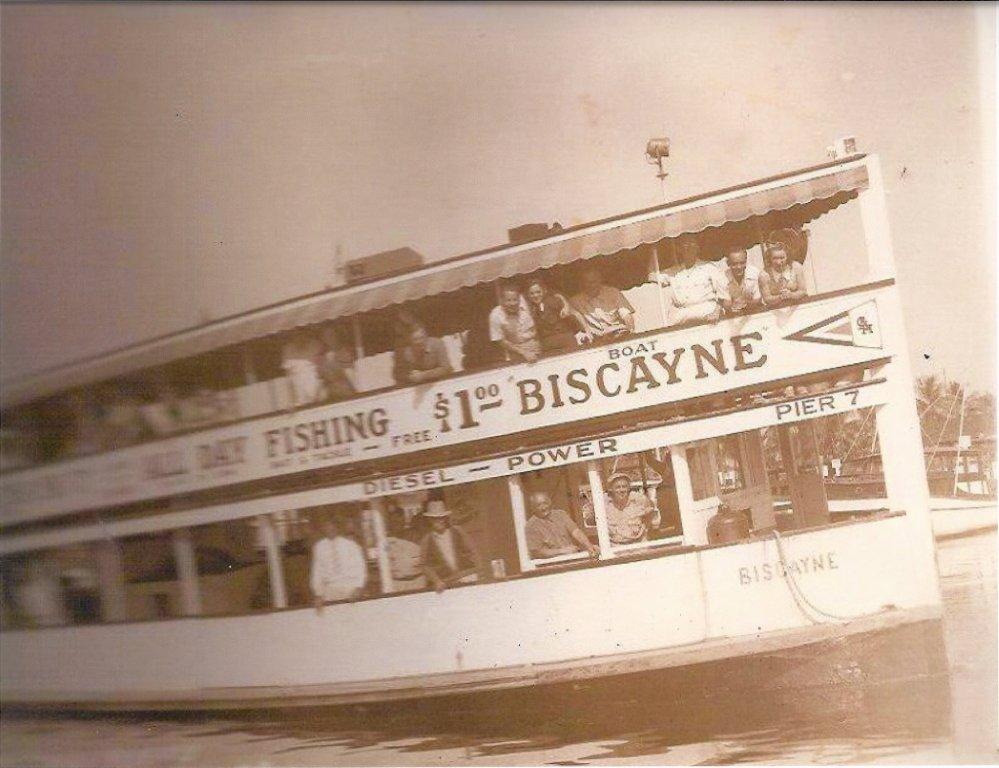 My mom, Jeannette Simon, nee Kronenfeld, came to Miami with her family in 1923. They left Ohio in a Model T for better weather in Palm Beach. When they came to a fork in the road, another motorist told them to head for Miami where “everything was booming.”

My grandfather, Abe Kronenfeld, opened a furniture store on Northwest 36th Street, where he sold not only to local residents, but also shipped furniture to Key West, until the Keys hurricane in 1935 destroyed the railroad. My family rode out the 1926 hurricane in their collapsing, roofless house on Northwest 45th Street. They were caught by surprise in the eye of the storm when the other half roared down upon them while they were surveying damage to the furniture store. Their ice box was the only thing in the house that survived the storm.

It was Yom Kippur, so my grandmother prepared food for dinner and invited all of the neighbors to have a picnic dinner with them in the front yard on blankets and sheets. Mom went on to graduate from Buena Vista Elementary, Robert E. Lee Junior High and Miami Edison Senior High School and then went to FSU (an all women’s college at that time). She taught Sunday School at Beth David and was president of Hadassah.

My dad, Herbert Lee Simon, moved with his family to Miami in 1935. His father, Herbert A. Simon, was born and raised in Monticello, Florida, where his family had settled in the 1860s. Before settling in Miami, my grandfather was an attorney and businessman in Washington D.C. He also had a summer home in Chesapeake Beach, Maryland, where he served on the council and was elected mayor.

In 1938, they built a real estate office on the corner of Northwest 27th Avenue and 23rd Street, on the railroad tracks across the street from “Johnny and Mack.” Every time the trains passed by, the whole building shook and the dust from the roadway filled the office. In the summertime, big electric fans blew hot air and more dust around. My grandfather and dad were told that Miami would never grow as far west as 27th Avenue.

Dad graduated from Miami Senior High School and then joined the family real estate business. My dad and mother, his father and mother and his brother, Merton Simon, all worked together in that office until 1968, when they all moved to Southwest 27th Avenue and 27th Street.

Family fun was always an adventure, and fishing or crabbing were favorites. The family almost always owned a boat. In the 40s and 50s, the boats were kept in the Seybold Canal. Afterwards, they were smaller and placed on trailers. Party boats were also a favorite, fishing in Biscayne Bay and loading up on big grouper, snapper, mackerel, etc. Crabbing for blue crabs in the canals along U.S. 41 (Tamiami Trail) near Everglades City was a regular weekend jaunt. After a few hours, our gunny sacks were filled with crabs and we would head home to steam them and have a feast spread on “newspaper tablecloths.”

Mom and dad married in 1940, and lived a storybook romance for 69 years. They were inseparable. They were always involved in school activities like the PTA and the Band Parents’ Association. After my sister Barbara and I graduated from high school, our parents became active in the Miami Board of Realtors, where my dad was elected president three times in three different decades. He served on City of Miami planning and zoning boards and was elected to the first Cocoanut Grove Village Council. Mom was active with the Realtor Associates, headed an anti-graffiti program in the county, and was president of the Museum of Science Guild.

Dad’s most recent honor came in 2010, when Southwest 27th Avenue from U.S. 1 to Coral Way was named “Herbert Lee Simon Avenue” by the Florida Legislature. The signage was installed on Oct. 19, 2010, a year after dad passed away.

Life was much simpler when I was growing up. We did not have a front door key until I was about 10. I walked to school at Shenandoah Elementary, where the crossing guard knew each child by name and called our home if we did not show up. On the way home, we walked by Shenandoah Candies where they made chocolate-covered coconut patties. Each afternoon, the store had “seconds” sitting out front waiting for us. In summer, there was sliced watermelon (the store only used the rind portion for sweet pickles) waiting for us.

On Thanksgiving, we always went to the Miami High/Edison football game, which filled the Orange Bowl. We would alternate “sides” each year, but it never seemed to matter, because Miami High always won. We would go during the summer for a slice of iced, cold watermelon for 25 cents on Northwest Fifth Street near the Eighth Avenue bridge, or a chocolate sundae at Puritan Dairy on Flagler Street across from the Bascom Pet Shop on 15th Avenue.

On Saturdays, we would go to the Burdine’s Tea Room and get a “Snow Princess” or a “Clown” for dessert and then go to the 5 & 10 cent store and press our noses to the store window as the doughnuts “flipped” in the doughnut machine. Or we would go to the Tower Theater on Southwest Eighth Street, and for 14 cents we could see the world newsreel, cartoon, serial, and a feature movie.

At Christmas/Hannukah, grandfather Kronenfeld took a truckload of underprivileged kids to the Tower Theater and treated them to a day at the movies and gave them a “bag of goodies” to take with them. New Year’s Eve was spent watching the Orange Bowl Parade. In those days, everything from oranges and candy to toys were tossed from the floats, and we always loaded up.

When we moved to Coral Gables, I remember the bus drivers leaving their route to drive us to our front door if it was raining. In October, the merchants in Coral Gables allowed the Ponce Junior High students to paint their big windows with Halloween murals, and awards were presented to the winners after the paintings were judged. I marched in the parade with the Ponce Junior High Band (Jessie Blum, director) in the Jr. Orange Bowl Parade. At Miami Senior High, I was active in all the band programs (Otto J. Kraushaar, director). We marched every year in the big Orange Bowl parade to the cheers of the massive crowds.

My husband, attorney Richard Lyons, and I raised our sons, Jonathan and Michael, in Miami. They grew up hearing about the “good old days” and experiencing the special, and different, Miami lifestyle of their own generation. All told, each of my family’s four generations have had wonderful but vastly differing experiences and memories of Miami.