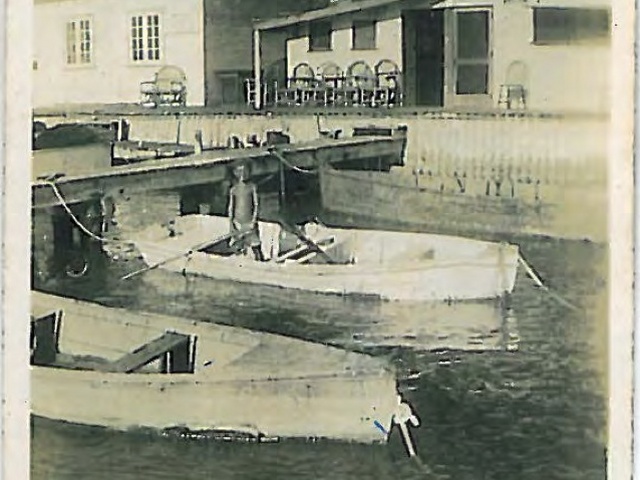 I guess my earliest memories are from the time of World War II, when I was aged 6 to 10, and all of Miami Beach was an OCS (Officer Candidate School) for the Army. Soldiers were marching in the streets, coming to our house for dinner, and training on the golf courses, where “obstacle courses” were set up.

Car headlights were painted black on top. Windshields had stickers to show the amount of gas you were allowed (according to need). Once or twice, my dad or someone drove us to the beach to watch a freighter burn that had been torpedoed by German U-Boats. On Purdy Avenue, there was a fenced-in area where they kept German POWs for a short time. I remember walking by, but don’t remember saying anything to them.

Port Elco, a marina at Dade Boulevard and Purdy Avenue, is a good place to start a tour of our neighborhood. I remember that I was at Port Elco on VJ Day (the end of the war). All the boats in the marina started blowing their horns, and everyone was shouting, “The war’s over!”

Right next to Port Elco was the bridge to Belle Isle. It made a good ramp for our home-made skate scooters (an apple box, nailed to a 2×4 with roller-skate wheels) and was a good place to fish with our drop lines, and especially good for dropping our home-made crawfish and stone crab traps. Back then, we thought that shellfish had to be cooked alive, so we just ran home with them.

The mouth of the canal, where the tide either came in or went out under the bridge, was another great fishing spot. That’s where I kept my rowboat, and later on it was a hurricane refuge for my brother Tom’s and my sailboat.

Mother Kelly’s was a nightclub on the corner of Dade and Bay roads. Mother Kelly (no relation) was a round, white haired, Russian man with three grown sons. Because I lived so close, I was adopted as their mascot. Sometimes, on Sunday morning, I would help Mother Kelly clean up the bar.

Three blocks south of Lincoln Road was the start of Flamingo Park, the biggest park on the Beach. It had red clay tennis courts (sometimes when I went to play, my sister Babe would give me her white tennis shoes to take along and scuff up to look worn), basketball courts, softball fields, a football field (my high school, St. Pat’s, played our home games here), a band stand, a professional baseball field (AAA), and two four-wall handball courts. Some of the best players in the country played here. In my late teens & early 20s, they let me play with them if they needed a fourth.

In the beginning, when we left the neighborhood, it was either by foot, thumb, bus, or jitney.

There were not enough bikes to go around. In fact, I think I had the only one for a while. It was a hand-me-down from my sisters, which I used on my paper route until I saved enough to buy a new Columbia from Western Auto. Of course, we also got rides in my mother’s car – mostly to the beach at 21st Street and Collins, but also many other interesting places, like Matheson Hammock, Tahiti Beach, Venetian Pool, Greynolds Park, and many others.

The bus system in those days was great. If my mother wasn’t taking us to the beach, we caught the “L” bus across from Mother Kelly’s to the 21st Street beach. The L bus was also our ride to downtown Miami, across Venetian Causeway, down Biscayne to Flagler, the last stop for the beach bus, and beginning for all Miami buses. At this stop was the famous “Jahn the Magic Man” hobby shop. Model trains, planes, boats – the works. At one end was a small stage where Jahn would put on magic shows.

On Saturdays, I got to work with my dad at his produce company. I’d help put up orders, and ride with the drivers. Dad and I would go to breakfast at Charlie’s Marketview Restaurant. We always sat at the same table and had two cake doughnuts.

Dad’s warehouse was on the railroad tracks and when the circus came to town, he brought me down to the station to watch them unload the animals and gear. The field where they set up was also nearby, so we got to watch them put up the “Big Top” and lay out the midway. They used elephants to help put up the tent, carry the gear, and pull up the center pole. Just as much fun as the actual circus.

When Tom came back from the Army and UF, about the time that my father died, I was 13. I gave Tom my paper-route savings (about $400) and he put up the rest, and we bought our first sailboat – a 20-foot center-board sloop with a star rig. Tom came up with an enterprise for her: advertising for Picciolo’s Restaurant. My mother sewed a sign on the boat’s sails in red letters, “TONIGHT DINE AT PICCIOLOS” on the main sail, and “DINNERS $1.25 & UP” on the jib. Mr. Picciolo paid us $100 a week (weekends and holidays). The “enterprise” ended when we turned her over in Government Cut and tore up the rig on the jetties.

After her demise, we bought a 30-foot sloop with a cabin and gas inboard. She was a “double-ender” and looked like a submarine when motoring. We named her Gypsea.

We sailed her down to Matecumbe one time for her most eventful cruise. She sunk at her mooring behind the VFW hall, when she impaled herself on a submerged piling we didn’t know was there. After that, we moved on to power.