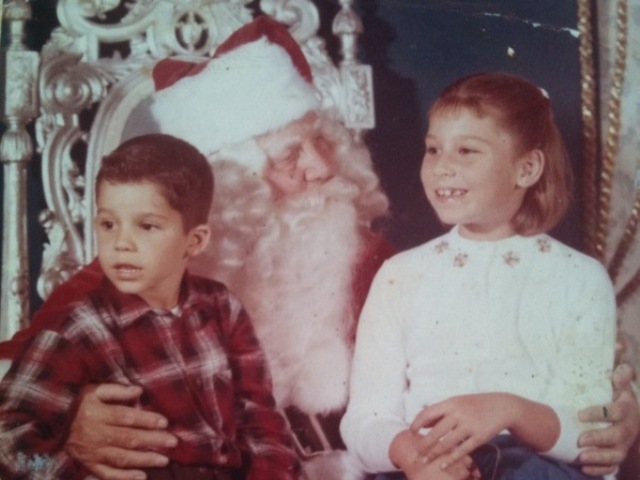 It will be fifty years this November since we took the Pan American flight that would separate us from the life of the privileged in Cuba to that of political refugees.

They served us tiny ham-and-cheese sandwiches with the iconic blue PanAm logo that tasted to us of the future – America.

We moved in with my aunt and uncle and their children into a three-bedroom house on the corner of 82 Avenue and 17 Street, a neighborhood known as Westchester. The community was predominantly Jewish with a handful of Cuban professionals, actors and writers. Walking distance was Everglades Elementary, a lovely school, but not if you didn’t speak the language.

I knew a few words in English – the colors, numbers and so on – but not enough to survive the third grade. I was made to feel alien, which I was. I looked forward to my afternoons in the warmth of the kitchen of Mrs. Meyers’s house, down the street. She would give me a quarter after school for babysitting and she allowed me to lick the cake batter off of her beaters. She was so nice to me and I acted as if I enjoyed her batter, but I didn’t because I was suffering from anorexia nervosa and couldn’t keep anything down.

No one really knew how bad things were for me at Everglades until my mother was informed that because of my problem with the language, I was being held back in second grade. Thank God that practice has since been abolished.

I also cherish the memories of the holiday traditions that were established early by my parents in an effort to bring normalcy to our lives. We would all pack into the Ford Falcon and head to Jordan Marsh department store downtown (where the OMNI eventually would be built) to see the beautiful animated Christmas displays and head upstairs to the toy department where we would get our traditional picture with Santa.

The holiday tradition would culminate with the New Year’s Eve parade down Flagler. Sometime around noon we would set up the fold-out chairs in the parking lot across from Walgreens and, with sandwiches and hot cocoa, we would see the likes of Paul Anka, Bobby Darrin, the stars of TV shows such as “Flipper” and the terrific high school bands. Everything in the “Magic City” was bright and shiny.

Spring of 1964 would bring The Beatles to Miami Beach, the Mustang, and Coral Park High School to Westchester. “Wow, Mom, that’s where the big kids go,” I said, but all these things were in the future.

Spring also brought the celebration of Easter. Services at noon would be in Spanish at St. Brendan’s on 87th Avenue, with me in my two-piece pink outfit and straw hat from the Zayre department store, also on 87th. Lunch would follow at the Pizza drive-in on Bird and 87th followed by a jelly-bean-decorated coconut cake from Publix on Coral Way.

I did not go to Coral Park High after all. I graduated from Southwest High off of 87th Avenue and 47th Street in 1973, and by the time of my ten-year-reunion, both my parents had died of cancer at the age of 47, and I was divorcing. I had nothing to share.

The OMNI by then had replaced the magical windows of Jordan Marsh. As luck would have it, while getting certified in teaching, my internship landed me back at Everglades Elementary, in the exact second grade with the same teacher who had held me back as a seven year old because I did not understand the language.

I eventually did end up at Coral Park, but as a teacher and, amazingly, the little seven year old who had been held back was now honored by her peers and elected 1999 Teacher of the Year.

The “Magic City” will never recapture the luster of the sixties through the eyes of a seven year old. I miss the blimp on Watson Island, the train rides at McArthur Dairy on Mother’s Day, flying kites on Father’s Day at Robert King High, the colorful Christmas windows at Jordan March, and most of all neighbors like Mrs. Meyers.