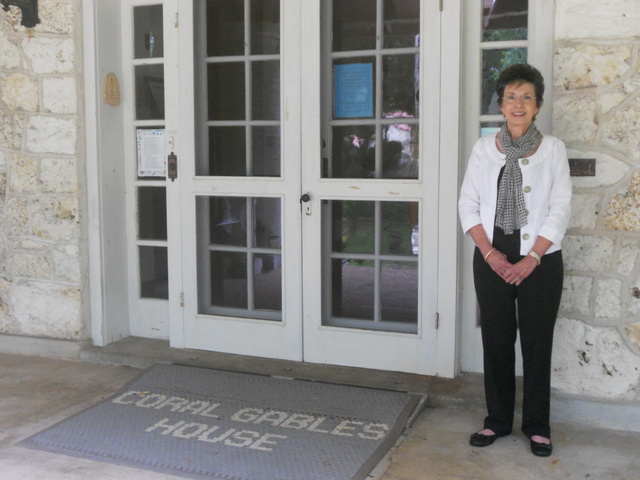 In 1953, my father realized his dream of many years when we moved from Allentown, Pa., to South Florida.

I can remember stepping off the train at the old Florida East Coast Railway station in downtown Miami in the middle of August. When the blast of heat hit me, all I could think about was how I missed my hometown, my friends and my dog that I had to leave behind. When I entered Ada Merritt Junior High School, it looked like a cardboard school compared to the sturdy brick school I attended back home. It was a difficult adjustment, but before long I made new friends and became acclimated to the heat and mosquitoes.

We lived on Southwest Sixth Avenue and my brother Jim and I would take frequent walks to explore our new environment. We often walked by the two-story frame homes from the late 1800s that lined Brickell Avenue. Close by was Miss Harris’ School, a private school for girls. My only regret is that I never took photos of these historic homes.

One day, my brother and I bicycled across the Rickenbacker Causeway to the end of Key Biscayne to explore the old Crandon estate. There was very little left, but it was exciting to view the remains of this home, as well as Key Biscayne. We could hardly walk for a few days after that long bike trip. Another time we tried to “enter” Vizcaya via the bay side, but didn’t get far past the thickets.

Our family moved to Coconut Grove a few years after coming to Miami. Our home was on a street that ended at the bay. There was a large empty lot that extended from behind our home to the bay. This land has since been developed. Back in the ‘50s, we had large land crabs crawling all over our back yard and we could get a clear view of the bay from our house. I used to enjoy sitting on the seawall at the end of our street watching the boats go by. From the seawall, I could see Fair Isle (now Grove Isle) before it was developed.

When we were teenagers, we used to speed down “thrill hill,” as Darwin Street in Coconut Grove was then nicknamed due to its elevation. It wasn’t much of an elevation but compared to the rest of Miami, it was a hill. Being a short hill, we had to quickly brake at South Bayshore Drive. Just a few feet down the street was Jensen’s Restaurant, which later became Monty Trainer’s.

Coconut Grove was a sleepy, artsy town in the ‘50s. A highlight of my teen years was going to see Elvis Presley at the Olympia (now Gusman) Theater in downtown Miami. The theater was filled with screaming teens and, I am embarrassed to admit, I was one of them.

After graduating from Miami High, I entered the University of Miami. The campus was different from the way it looks today. Everyone congregated at the “Slop Shop,” along the patio by the lake. Girls were forbidden to wear Bermuda shorts to class and many wore them under their trench coats. There was always a party going on at one of the frat houses that lined the campus, and the lion in front of PKA frat house was constantly getting attacked with paint. On Friday afternoons, the place to go was the Campus Canteen, which is now Taco Rico on U.S. 1. One afternoon, Coral Gables police officers pulled up to the Canteen with a bus to haul away all the students who were caught drinking under the age of 21.

Miracle Mile and Lincoln Road were THE places to shop before Dadeland was built, with many wonderful stores to choose from, like Judy Leslie’s and Stow on the Wold. Popular restaurants included Chippy’s and Jahn’s Ice Cream Parlor. Also, Tyler’s Restaurant on Ponce de Leon Boulevard, where the chicken with honey was always a hit. A few blocks down on Coral Way was Dean’s Waffle Shop where we would go for a late-night snack after a movie. At Dean’s you always saw someone you knew. The Holsum Bakery coffee shop was another popular spot to stop for coffee and glorious French doughnuts.

In the ‘70s, the favorite sport among teens, including our oldest daughter (unknown to me), was to sneak into the abandoned VA hospital – now the Biltmore – and climb up to the tower. This was a challenging and scary prospect as there were no lights in the building and the abandoned operating tables and gurneys added to the eerie atmosphere. I learned of these exploits years later when my daughter knew she would be free from punishment.

My husband and I have been residents of Coral Gables for 45 years. We remain ever grateful for the privilege of living and raising our children in this beautiful city. Our daughters now live in New York but loved growing up here and spent much of their youth playing tennis and swimming at the Coral Gables Country Club. They have fond memories of J. Paul Riddle, an aviation pioneer and founder of Embry Riddle Aereonautical University, who was a mentor and tennis coach to my older daughter and so many of the youngsters who frequented the tennis courts.

As a docent at Merrick House, I have learned much about our city’s history and the debt we owe to its founder and creator, George Merrick. It is always a good feeling to drive through the arches and come home to this beautiful tree city. There is nowhere in South Florida I would rather live.