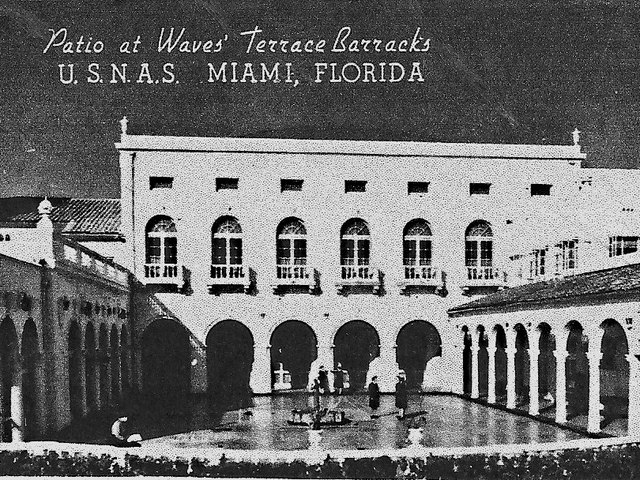 I was born during a knee-high snowstorm on Feb. 20, 1921 in Pittsburgh. The Bureau of Vital Statistics misread the doctor’s crossed t as two t’s, so I became Ritta instead of Rita. I was second oldest of six children – Eva, Ritta, Josephine, Mary, Frank and Dolores.

I started grade school at age 5, skipped the third grade and graduated at age 12. I was a voracious reader, especially on the weekends. The travel advertisements in the Sun-Telegraph and Pittsburgh Press about Florida were so enticing to look at on zero degree days. Every step along my route to school reinforced my thoughts about Florida.

After graduating from high school at age 16, I attended business school and then was employed by Carnegie-Illinois Corp. as secretary to the expeditor for a shipbuilding company, which built destroyers, etc. for the war effort.

We were a very patriotic family, and since the only male was 12 years old (he later served in the Korean War), I enlisted in the Navy in the organization “Women Accepted for Voluntary Emergency Service” (WAVES). I was sent to combined boot/yeoman training in January 1943 at Oklahoma State University in Stillwater.

As our training was coming to a close, we were asked to indicate if we had a preference of Miami, Washington or California for a place of deployment. Naturally, I chose the place of my dreams – MIAMI, and was fortunate to be deployed to the U.S. Naval Air Station at Opa-locka.

I was assigned to the Flight Training Division in Hangar No. 1. At that time, only pre-operations training was given, since the runways were too short for the larger, heavier planes required for operational training. Later, when the runways were completed, the base became Operational Unit –VSB-5 OTU-5. The plane used was the famous SBD-5 dive-bomber known for its “Swiss cheese” wings. Newly commissioned Navy and Marine officers were trained there, in addition to a few British, New Zealand and Australian pilots.

Opa-locka had its own bus line to Miami, which was heavily used by both civilianworkers and military when on “liberty.” Miami and Miami Beach warmly embracedall servicemen. I still have my “Serviceman’s Guide,” which listed the places that welcomed us:

The MacFadden-Deauville Hotel for a very small fee provided use of their Olympic-sized pool and lockers, etc. Richards department store had a lending library for two cents a day – no deposit required.

At Shangri La Restaurant, lunches started at 40 cents. At Club Bali, deluxe dinners cost $1.50. The daily rate at Hotel Patricia was $3 and weekly rates were $18 for one person and $25 for two people.

I was discharged in late November 1945, returned to Pittsburgh and took a few months off.

My military service was a most gratifying experience – doing what I felt was my duty and enjoying the camaraderie with my WAVE friends and the officers and enlisted men stationed in Miami. Some have remained friends for life.

In 1946, I was re-employed by Carnegie-Illinois in Pittsburgh and attended Duquesne University at night. After a couple of unendurable winters, I came to my senses and applied for admission to the University of Miami. I enrolled in 1948.

The main campus consisted of the administration building, a wooden science building, apartment housing, and an unfinished Merrick building (the “Skeleton”). The bottom floor was the bookstore and the second was a library. The top floor, when added, became home to the law school, many wooden portables, and the student union building, which was called the “Slop Shop.”

I was awarded a Bachelor of Arts degree in 1951 and enrolled in the law school. I graduated in 1953 and became a member of the Florida Bar, which I maintained for 50 years, retiring in 2003.

In November 1953, I married a fellow law-school graduate, Clifford S. Hogan. He served in the Army Air Force in the European theater as a fighter pilot, flying the classic P-51 Mustang.

In the early 1960s, during the Cuban Missile Crisis, he was recalled to serve at the Homestead Air Force Base and we temporarily moved to the base.

The army had set up a tent city for the troops. The year before his assassination, President John F. Kennedy visited the base. All of the residents lined up to greet him. He rode in an open-air car. Everyone was quiet and I shouted “Hi” and he looked directly at our camera and we were able to get him on film waving at us.

After the end of the Cold War, we returned to our home in South Miami. My husband remained in the reserves for many years and later retired as a colonel.

We were blessed with three children: Clifford, Robert, and Valerie. They received their primary educations at Epiphany, Lourdes, and South Miami High School. Two obtained degrees at the University of Florida and one at Florida State…so, we had all three schools covered football wise. We have been parishioners at Epiphany Catholic Church all of our time in South Florida.

Miami has more than exceeded my hopes and dreams…which began at age 12 in frigid Pittsburgh.