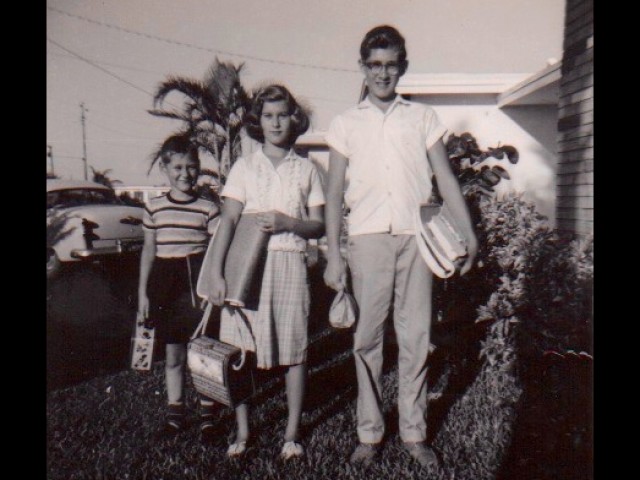 My family moved to Miami from Philadelphia in August 1959 as I was nearing my 6th birthday. My father, Nate Adelman, owned a successful furniture store in Philly and at the ripe old age of 40 decided to hire someone to run the business for him while we would live in sunny Miami and enjoy the beautiful weather and sandy beaches. After spending our first year in the Shenandoah neighborhood we moved to a beautiful new house in the Skylake section of North Miami Beach.

North Miami Beach was a wonderful place to grow up. The neighborhoods were very safe and kid friendly. You could play outside at all hours of the day without any fears and there were many fun and interesting activities to partake in. At the back of our home was Sparling Lake. We would swim and fish in the lake and my older brother and sister, Nolan and Linda, would go water skiing in our 15-foot Boston Whaler boat. We lived just a few blocks from Greynolds Park and you could spend the day there hiking through the trails, fishing, and riding on the paddle boats.

My mother, Zena Adelman, would roast the most amazing rotisserie chickens and the family would enjoy our lunch sitting on the picnic tables in one of the park pavilions overlooking the lake. Each Sunday the family would spend the day together at nearby Haulover Beach along with my grandparents, aunts, uncles, and cousins. We would grill burgers and hot dogs, go swimming in the ocean, and play games of horseshoes in the sand.

The 163rd Street shopping center was an open-air center back then and was the place to go. Besides Burdines, Richards, JC Penney, and Woolworths there were the movie theaters and the little amusement park full of rides for the children. It was also the home to such wonderful eating places back then as Corky’s, Wolfie’s, Mr. Coney Island, Mr. Donut, and Figaro’s Pizza.

Back in the 1960s the public schools in North Miami Beach were not air conditioned or heated. In the winters you would really have to bundle up to stay warm and the rest of the year you had to battle the heat. I can remember the sweat running down my forehead onto the papers I would be writing on throughout my years at Ojus Elementary, JFK Junior High, and Miami Norland Senior High.

North Miami Beach had a very large Jewish population during the time I grew up there. I attended Hebrew school at Beth Torah and later on at Temple Adath Yeshuron. These were both wonderful congregations and along with my magnificent parents they taught me important family values that have stuck with me throughout my life.

As I got to be an older teen I experienced the wonders of downtown Miami. My best friend and I would take an hour-long bus trip to Flagler Street to check out the stores and restaurants and take in a movie or two before taking that long trip back home. It was like visiting another country for us back then with all of the Cuban cultural things we would find there that were so different than what we were accustomed to at that time in North Miami Beach.

After graduating high school I began what was to be a temporary weekend job as inventory help at the new JByrons department store at the Skylake Mall. That temporary job ended up lasting 25 years. I worked as a stock boy and salesperson while attending Miami-Dade Community College and later FIU. After graduating from college in 1975 I went into their management program and was the store manager at many of their locations from 1977 until they unfortunately went out of business in 1997.

During my 20 plus years in retail management I worked in numerous areas of Miami-Dade County, such as Allapattah, Suniland, Cutler Ridge, Homestead, Kendall, Skylake, Hialeah, and Coral Gables. I was very fortunate to work with so many outstanding people during those years of all different races, ethnicities, and cultures that help make Miami the incredible city that it is. It also allowed me to meet my beautiful wife, the former Susana Suarez.

We have been married now for over 38 years and have the pleasure of living a multi-cultured life of American-Cuban, as well as Jewish-Catholic. We, along with our loving daughter, Michelle, son-in-law Lu, and new baby grandson, Angel, speak in both English and Spanish, celebrate a number of diverse holidays such as Hanukah and Christmas, and cook and enjoy foods like matzo ball soup and arroz con pollo.

We get to attend the bar mitzvahs and bat mitzvahs of my sister Linda’s beautiful grandchildren and also Noche Buena celebrations with all of the wonderful members of my wife’s family who have been very loving toward me from the very first day I met them. I wouldn’t want to have lived my life in any other way.

As mentioned earlier, these are just some of the things that make living in Miami so unique and I am so happy that I was able to grow up and live here the vast majority of my life.