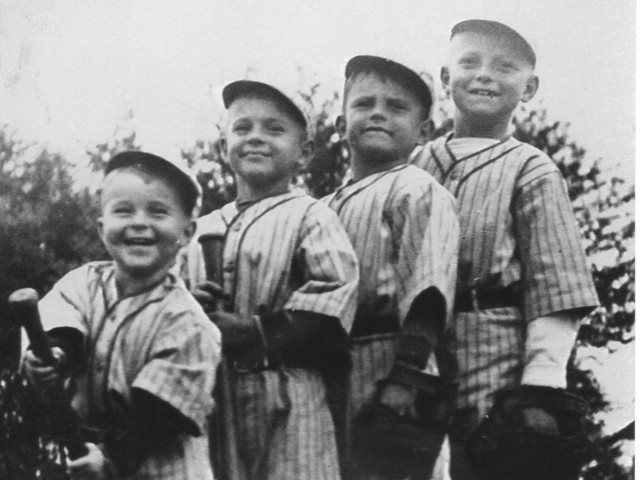 I am the youngest of the Wood brothers — Hayes, David, Hugh “Hooty” and Tom — all born between 1926 and 1931. We were very close and shared many things together in Old Miami. We all were born at Victoria Hospital on Northwest 10th Avenue, which still exists as a nursing and rehab center.

We were raised on a truck farm on Southwest 19th Street, about five acres that is now part of Shenandoah Park and middle school. We were always playing ball in the park. The park had many famous supervisors who went on to play pro ball, including Al Rosen with the Cleveland Indians and Lefty Schemer with the New York Giants. My only buddies still around are Lester Johnson, Fred Kirkland and Ed Woitke.

We attended and were baptized at the Riverside Baptist Church on Southwest Ninth Avenue and First Street (the congregation moved to Kendall in the 1970s and the church sanctuary now houses the Manuel Artime Theater).

As kids, we worked with the farm’s chickens and vegetables and created Wood Brothers Poultry and Produce Co. We sold the products to Wrights Market on Southwest Eighth Street and 22nd Avenue. My brothers and I all attended Shenandoah Elementary and Junior High schools. I also went to Coral Way Elementary when it opened in 1937 on Southwest 19th Street and 13th Avenue. We all went to Ponce de Leon Senior High School on U.S. 1 in Coral Gables. My brothers Hayes and Hugh and I were president of the student council. I met my beautiful wife, Virginia, in high school in 1949 and in June we will have been married 60 years. Ponce is now a middle school and the high school is now Coral Gables Senior High on Bird Road.

My brothers and I founded a band and played at high school dances, New Year’s Eve parties and other events. Hayes played saxophone; David and I, trumpet; and Hugh was on the trombone.

We watched the roller derby at the Coliseum on Douglas Road. It is now a Publix and eight-story condominium. John Rosasco was the star of the team. He later ran Venetian Pool in Coral Gables, where everyone loved to hide in the caves. Fader’s Drug Store on 22nd Avenue and Coral Way was a popular spot for milkshakes and root beer floats. I remember watching Pan Am Clippers on the bay in the Grove on the site of what is now Miami City Hall.

It was only a bike ride to the Tower Theater on the Trail and for nine cents I could see two double features, a cartoon and a live amateur show. We could hop the Dunn bus at the corner and go downtown to various theaters — the Rex, Town or Paramount — and have a grilled-cheese sandwich at the counter of the Red Cross Drug Store, or a hotdog at Woolworth’s for a dime.

There were many favorite eating spots: Rosedale Delicatessen, owned by the Pont brothers (I would have corned beef on rye with a slice of onion and mustard, a big kosher dill and some potato salad); Kitty and Jean’s on the Trail; hotdogs at the Pig Trail Inn on Miami Beach. Who remembers the Mayflower Doughnut Shop on Biscayne Boulevard sporting a sign that read, “As you wander through life in search of your goal, keep your eye upon the doughnut and not upon the hole.”

Sometimes all four of us would take a long bike ride to the deserted University of Miami skeleton campus, where we would swim in the lagoon. Today, UM is one of the finest private universities in the country. I am honored to serve as a member of the Board of Trustees. All four of us worked our way through UM. Three of us graduated with juris doctor degrees and one with a master of engineering.

All of us served in the armed forces: three Naval officers and one Army Air Corps technician.

One of my favorite memories was riding on the handlebars of my oldest brother’s bicycle on a Saturday morning as we and my other brothers went to the Ringling Brothers Circus in the vacant lot on the northeast corner of Coral Way and Douglas Road. There, we watered the elephants until the matinee started. We got free admission plus money we spent on hotdogs.

My brothers always looked out for me and I will never forget them as I am blessed to still live in Miami, the Magic City.