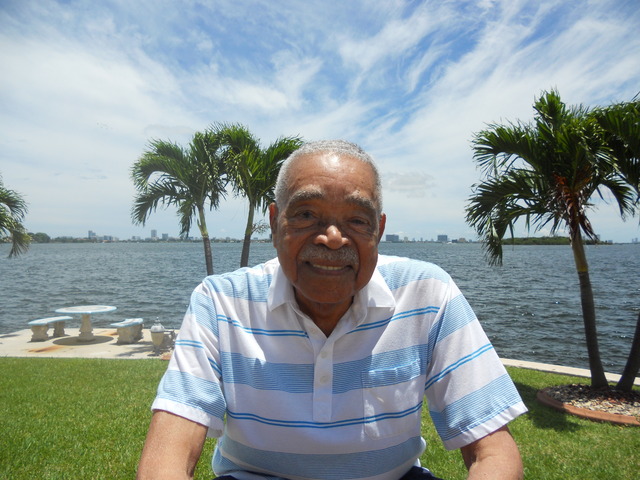 I was born in Nassau, Bahamas. I came to Miami when I was four months old in 1919. My dad came first on his way to visit a brother in New York City.
He was going to buy some printing equipment in order to go into business for himself in Nassau. He met some of his compatriots who had come over from Nassau and were living here. They said that this was a great town. They saw a lot of progress and opportunity in this young city. He must’ve seen it, too, because he decided to stay. He sent for my mother, my three sisters and me.

He had a sister living in Miami at the time and she rented a place for him on Northwest 15th Street between Second and Third Avenues. We lived there for a few months and then my dad bought a home in the 1900 block of Northwest Fifth Place. That’s where we all grew up.

Living in segregation, I wonder how I managed to get through without being hurt too badly. Back in my day, lynchings were every week. My mother sheltered me to keep me from getting involved with white people. When I returned from my duty in World War II, I gave my mom a list of cities that I would rather live in than Miami. She said that a lot of these places weren’t that different from Miami. They’re segregated just like it is here.

She said, “Anywhere you go, you’re gonna find the same kind of people and you’ll always be black.” She said that I’m not a person to run from something. If something isn’t right, then I ought to fix it.

When Martin Luther King came down, I attended some of his meetings. My friend was a good friend of King’s and I used to attend meetings where he would preach to us about nonviolence. I remember talking to Martin a few times and I said, “Martin, you really believe that if I was somewhere and a white guy spat on my face, you think I would walk away from that?”

I said I’d try and kill that son of a b—-. He said, “That’s why you’ve got to try to learn to control yourself.” I liked him.

Working for my father at The Miami Times is the only job I’ve ever had. I was working in the printing department, where the money was. The former state president of the NAACP (National Association for the Advancement of Colored People) used to come by my office all the time and talk to me about becoming more active in the NAACP. I said that my dad handles all that at the newspaper with the coverage. He thought my dad was too hesitant about taking a stronger stance and he knew I was tougher. His name was Father Theodore Gibson. He had Christ Episcopal Church in Coconut Grove. He said he needed my help, so I started helping out the NAACP a little more.

The first project I got involved with was integrating the golf courses in 1949. Back then, we could only play one day a week and that was Monday. That was the day that they maintained the golf course. They watered the lawns and cut the grass and we’re out there trying to play golf. I went and I talked to Gibson about it and started thinking about how we can attack it.

We decided to file a suit. We went out to the golf course in Miami Springs on a Wednesday instead of a Monday and presented ourselves to play golf. They wouldn’t let us in. I think it was two days later that we filed a suit. It took us seven years before the Supreme Court wrote a decision and said that you cannot take a person’s tax dollars for a municipal golf course and tell that person that they can only play once a week because he’s black.

After that, we had the beach. Twenty-eight municipal beaches everywhere but one beach for blacks, Virginia Key Beach. We decided we’d go after them in 1957. We called and arranged a meeting with the County Commission.

We got a good solid group together. We made sure that all of us were registered voters and all of us were freeholders. We had read the rules and believe it or not there was nothing in the county charter that said black people were restricted to one beach. But we had been told so many times and refused entrance to a white beach.

We had a meeting at 10 o’clock at Crandon Park. We went in and all the county commissioners were there. We made our appeal. They sat there and didn’t say a word. Nobody. We went on saying that it was wrong and that we wanna know what they’re planning on doing about it. They didn’t say anything. I guess they thought we’d just go away.

We then said, “It’s 10:20 now but what we plan on doing is coming back over here at 2 o’clock, and we’re going in the water. It’s up to you to do whatever you please. You can beat us up like most of you police always do when we go to the white beaches.”

Two o’clock came and our 12 had dwindled down to maybe about six of us. Oscar Range, whose wife went on to become our county commissioner, and myself, put on our trunks under our shirts and pants and just had on some sneakers. There were police out there just standing around us as a preliminary thing. We walked straight down to the beach, we kicked off our shoes, took off our shirts and we jumped in the water; just two of us. We were waiting for 20 minutes on something to happen, and nothing did.

We came back, put on our shoes, shirts and left. The next day, I called the NAACP and told them, “We’d like you to go to the beach tomorrow, any beach other than Virginia Beach.” We showed up and nobody said anything. The County Commission got the word out what we were doing and they knew they couldn’t defend it. From that day on, black people have been using all 28 beaches in Dade County.

Those are two things I’m most proud of. It taught me a lesson that you just gotta push and do your homework. First, you gotta be right. You’ve gotta have the right cause and you’ve gotta involve the right people. You just need some warm bodies to take a stand and get to the course and you’ve got a good chance.

(This story was compiled by HistoryMiami intern Lisann Ramos as recounted by Garth Reeves).

Garth Reeves was the publisher of The Miami Times newspaper and passed away on November 25, 2019 at 100 years old.