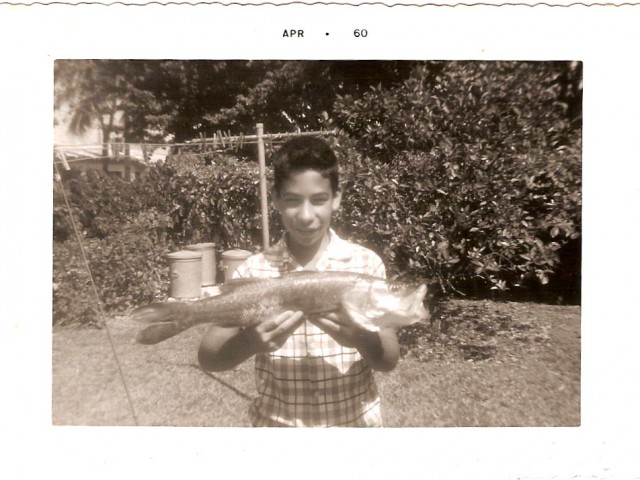 When I was just 6 months old my parents moved to Miami and rented a house across from a beach on Collins Avenue. They could actually open the front door of their house and see the Atlantic Ocean, but this beautiful view almost cost us our lives. Three months later a powerful Category 4 unnamed hurricane made landfall on September 17, 1947 at Port Everglades.

My parents were raised in New York City and were unwise to the dangers of tropical cyclones, so they elected to remain in the rented house; that is, until the Atlantic Ocean came “a-knocking.” My mother told me that when the ocean came through the front door my father decided it was time to leave. My parents grabbed me and my 4-year-old brother and tried to make it to the safety of the mainland in the family car.

When the sedan finally succumbed to the rising tidal surge halfway across the Venetian Causeway all they could do was huddle and hope for the best. An uncle on the mainland must have been more hurricane-smart and realized that one of his six brothers was probably in trouble, so he jumped into a 2 ½-ton truck they used for the family tile business and came looking for us. He possible saved our lives as my dad’s car was being battered by waves coming over the low bridge’s railings, according to my mother.

This experience had such a profound effect on my father that when he decided to build a house for his family a few years later, he used topographical maps and searched for a lot with a very high elevation. His final choice was near Southwest 23 Street and 14th Avenue and has an elevation of 36 feet above sea level. This ridge is part of the Miami Rock Ridge and is called Silver Bluff.

The fine house my father built rested slightly more than a half mile from Biscayne Bay and one mile from the first bridge of Rickenbacker Causeway, which were both in easy bike range for a young boy. This close proximity to Biscayne Bay would have a profound effect on me for the rest of my life.

At that time one could fish behind Mercy Hospital on the seawall for trout and jacks, or head over to the Rickenbacker bridges in winter for snook, loads of mackerel, bluefish, bonefish, tarpon, and big jacks. We even caught snook in the canals in the Grove and assorted fish on the bridge to “Fair Island,” before it was developed and renamed “Grove Isle.”

When I was just 3 years old my father died of natural causes and my mother had to struggle to survive. Before I was even 10 years old I took advantage of being a child of a single parent and became a free-ranging youth that ventured as far as his bike and legs would take him.

I took up fishing in earnest, and by the time I was 14 I fished in the summers all through the night, mostly solo since none of my friends shared this kind of freedom. (I leaned early on how to defend myself from pedophiles and bullies.) I was a late bloomer and did not learn how to swim until I was in 9th grade. One year later I bought a used Scuba outfit with my paper route money and started diving under all of the Rickenbacker bridges.

By age 15, I had complete usage of my mother’s ‘55 Chevy, and was ranging all the way down to the middle Keys to fish and dive. I lived a very adventurous life and often slept in her car next to bridges in the Keys, since my mother had a friend who drove her anywhere she wanted to go.

I lived to fish and dive and this pastime stayed with me for the rest of my life. In the 1950s, one really didn’t need a boat in South Florida to locate quality game fish. I caught tarpon, snook, trout, bonefish, snapper, bluefish and even grouper all from land or bridges. Some of these fish even earned me weight citations in the Miami Metropolitan Fishing Tournament before I graduated from high school, and still hang in my den.

Miami was truly a paradise for me over a half century ago. I now look how young kids are practically sequestered inside their houses out of parental fear. I always thank my lucky stars that I was fortunate to have those early experiences instead of being cooped up in front of a TV or computer as today’s children often are.