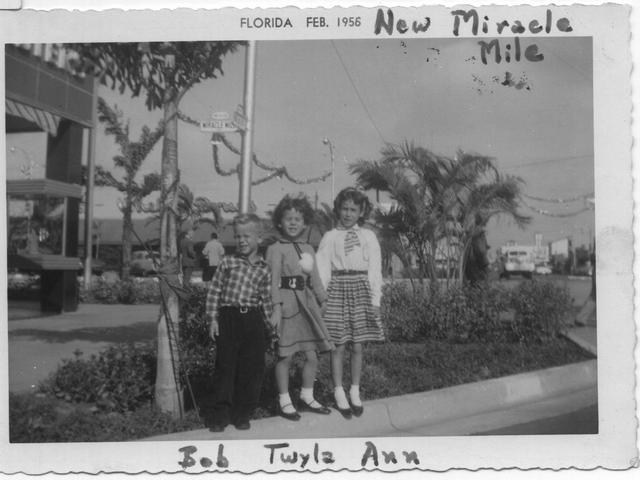 As a youngster, I was excited to be driving out 36th Street to see my uncle, Dave Click, arrive in an airplane. He was secretary to Florida state Sen. Trammell.

The airstrip was just a small landing area in a big grassy field with a chain-link fence around it. (In later years, I spent much time at the fine new terminal at Miami International Airport, because my husband, the father of my three children, flew for Eastern Air Lines.

We sang Moon Over Miami and loved it. “Stay Through May” was a Chamber of Commerce plea. Flamingoes at Hialeah Race Track were fun to watch. Kids were allowed on one special night to watch dog races at the Kennel Club, and Daddy took us there.

Watching the Orange Bowl parade was an annual event never to be missed. My husband and I had two good stepladders and stretched a board between them for us and our three children.

There was a huge rivalry then between Miami High and Edison. In the 1940s, a friend and I from Miami High attended Edison classes one day and were never noticed. That proved to us that Edison just did not have the disciplined organization of Miami High. Strangers there would have been sent to the office for identification right away. Once, Edison students splashed red paint across the front of our building when they finally beat us in football after 28 years. It made the news.

I received a scholarship to the University of Miami in 1943, but I did not own a car. I waited on Coral Way for a bus on class mornings. When I gladly accepted a ride from a gentleman who had stopped, the man was quite brusque in stating that a young lady should not accept rides from strange men.

I quickly settled in the front seat and said, “But everyone in Miami knows you, Police Chief Quigg.” He seemed pleased with my response and took me all the way to the university.

Coral Gables established its Miracle Mile of shops on Coral Way. The city put plants and flowers in beds in the sidewalks in the business district. Lincoln Mall in Miami Beach had also done this years before. Since I grew up to have a profession in landscape architecture, these places had a lasting influence on me.

My life was very much affected by strikes at the airlines, and they were so bad for our family and the city. I believe it was said that Eastern Air Lines employed 7,000 people in Miami at that time.