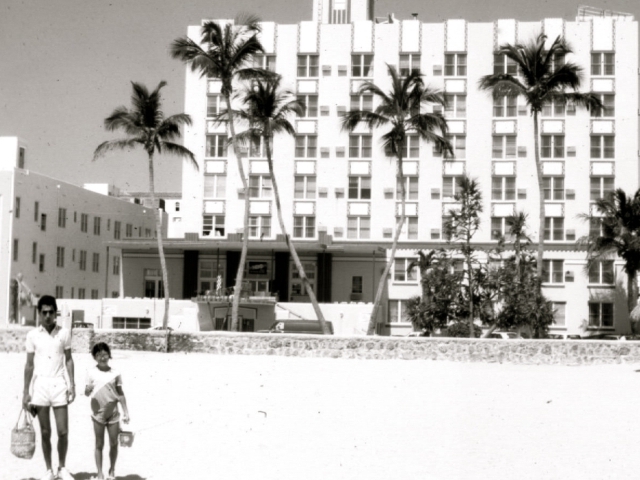 As it happens with all the affections destined to last, my love for Miami was initially tentative, and needed time to mature. Since my childhood, living in Argentina, I associated South Florida with intrepid pirates raiding the Caribbean waters.

Its name awakened the traveler in me, that wanderer that we children of immigrants carry in our hearts.

Miami was the preferred place to vacation for friends and relatives, those fortunate enough to be able to afford a trip overseas, but I had dreamed of visiting Disneyland in California unattainable for a modest-means family such as mine.

As a child years later, when the world of wonders that was Disneyworld opened in Orlando, I was certain that someday, somehow, I would get there.

Further down the road, in the early 1980s, the TV show “Miami Vice” was a somber global ambassador and tourist guide for all of us who never set foot in Florida. In 1987, when my husband Tomás Jakovljevic and I decided to accept the long-standing job offer from his family to move to Cleveland, Ohio, to work at his brother’s construction company, a friend asked: “Are you sure you want to stop in Miami? Keep in mind that there is a lot of violence there, drugs and weird people – and your daughter is only eight years old.”

At the time, our relatives living in Ohio did not dare risk coming down farther than Orlando, worried of a vaguely threatening environment, foreign to them as much in culture as in language, known through police news reports. The fact that some urban areas of Cleveland at the time were perhaps more violent and dangerous than Miami did not cross their minds.

So, the Caribbean was calling, and the three of us landed in Miami in April 1987. The city embraced us with a gulp of tropical air as soon as the doors of the airport flung open, a delightful welcome since we just had left Bariloche, a small winter tourist city at the foot of the Andes, in Patagonia.

We felt exhausted after severing all our physical ties to our old life – family, friends, home, school, and business, but we were sure it was the best for us and, in particular, for our daughter Adriana.

We called a taxi and asked to be taken downtown. The best way to know a city, in our experience, is to see its oldest parts, and check how it is maintained. Miami was a disappointment. It was flat, irregular, unkempt.

Nonetheless, some changes were sprouting here and there, like the metro mover and the recently opened Bayside with its nearby park. We stayed overnight in an old hotel – now demolished – right across Biscayne Boulevard. The next day we rented a car and decided to move near the beach. We found the perfect place driving through the almost deserted South Beach with its beautiful and faded art deco buildings.

The hotel was called The Netherland, and it was well kept and cared for by its owners, a nice Cuban family. The reception area had big openings with light, gauze drapes swinging in the breeze. Several fans hung from the ceiling over big pots sporting luscious plants. The intensity of the sea behind the palm trees through the windows of the efficiency won us over. I wished to be a painter to reflect on canvas the pastel beauty that surrounded us, the languorous palms, the elderly sitting on their rocking chairs in the shade of the verandas. The quiet beauty of the place conquered our hearts.

The hotel was home base for our sightseeing trips. We stayed for three weeks, alternating between visiting nearby points, and resting on the beach or at the pool. A few days after our arrival, Adriana asked, puzzled: “Dad, when are the Americans going to start speaking English?” He laughed and answered: “When we get further North.”

Three times we drove to Disneyworld. The child I was once, dreaming of visiting Disneyland, finally got her wish, and the adolescent reader of adventures reached the turquoise, fantastic waters of those fabled Caribbean pirates. Adriana was fascinated.

Through the years we would return often, witnessing the changes that, to us, wiped away much of that Miami soul that we got to enjoy briefly. The Beach’s commercial and gastronomic renaissance, with its visitors from the American gay culture, gave a touch of pizzaz and cosmopoltanism to our vacation days.

Every couple of years the three of us would immerse happily in a feast of the senses, being among people from all over the world. Our ears delighted in the variety and musicality of the unintelligible languages and our eyes admired the toned and tanned bodies and the famous faces parading in the evenings in front of the cafés.

The old and abandoned downtown had its rebirth, too, opening during daytime in a thousand shades, like tropical hibiscus, to fold down in the evenings under metallic fences.

Then, one day by the end of 2000 we bought a home in Miami-Dade, and in March of 2001 we packed all our home belongings in a U-Haul and drove down to live under the palm trees in a quaint, bird-sanctuary neighborhood called the Village of Biscayne Park. We started anew jobs, friends and outdoor life.

My husband took the plain, abandoned – but structurally sound – house and, slowly and all by himself, designed and transformed into a modern, very comfortable Floridia home.

Our daughter Adriana left for graduate school, got her degree and married a bright Connecticut man with whom they had a beautiful baby girl, Sofía, last February.

In my spare time, I go back to my long abandoned manuscripts and find a lively, interesting, vibrant literary life in writing groups, conferences, and book presentations around the city.

So we will stay happily in Miami, to share good and bad times, dodge dangerous summer storms, enjoy the peaceful evenings next to warm tropical waters and take in the luxurious pleasure of feeling the perfume of native flowers in the winter time.

Certain deep loves mature slowly, but they are meant to be forever, as the song goes.