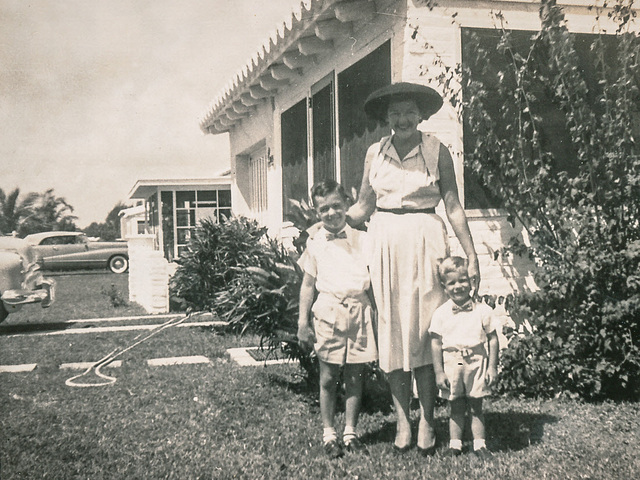 The Village of Biscayne Park was, during the ’50s and ’60s, a residential community of small neighborhoods squeezed between Miami Shores and North Miami. A single block would house a group of families who were as familiar with one another as they were with close relatives.

In the period following World War II, there were a great many such neighborhoods with adults and children of similar ages. The Baby Boomers were booming.

Children played together in the street and adults had regular barbecues and canasta parties. Everyone knew everyone else on the block. Children spent Saturdays at the Shores Theater. A matinee would have two westerns and possibly 20 cartoons. An afternoon’s entertainment could be had for less than 50 cents. Since we were living in a two-bedroom house, I credit those long matinees for giving my parents enough time to give me a brother to harass.

Polio was very much a part of our lives back then. Two kids on our block were stricken and paralyzed for life. I was playing cards on the living room floor with a friend when she tried to get up and couldn’t. She was rushed to the hospital, where she and her parents got the bad news.

Young children from Biscayne Park attended Miami Shores Elementary, William Jennings Bryan or one of the two Catholic parochial schools nearby. You could walk to the North Miami Zoo — until it was torn down to make way for North Miami Junior High. Their tiger mascot was selected since the school auditorium was built on the site of the old tiger cage.

An evening out might be a trip to Marcella’s Italian Restaurant on West Dixie Highway or up to Nohlgren’s Painted Horse on Biscayne Boulevard for their 99-cent all-you-can-eat special. On a very special occasion, you might be treated with a trip to the Lighthouse Restaurant at the northern side of Haulover Cut. The Lighthouse had green sea turtles in cement-walled aquariums next to the dining room and a large wood-carved 3-D relief of an underwater scene between the bar and waiting area. It had a back patio on the ocean.

During summer vacation time, families would regularly scout the Miami Herald hotel ads to find the best deals on Miami Beach. Our family of four could spend an entire weekend in an air-conditioned room for $20. The hotels would have a pool and beach access. My family would regularly stay at the Carousel Motel, which had a small mechanical carousel out front.

Entertainment was simple. We had radio. One person on our block had the first television, and the neighborhood kids would gather around in his living room to watch westerns and old horror films, the latter presented by Miami’s own M.T. Graves.

When my family finally got a console TV, I had the pleasure of traveling with my dad to the Eagle Army-Navy store in North Miami to use their tube tester. We would walk in with a brown paper bag full of vacuum tubes and we would proceed to test each one.

The Army-Navy was next door to Royal Castle, famous for its nickel birch beer and 15-cent hamburgers. I would later work at that “RC Steakhouse.” I was behind the counter in 1963 when the manager came in to tell us that President John F. Kennedy had been shot. We listened to the radio until we heard that the president had died. Everyone remembers where he or she was on that day.

My grandmother lived on Northeast 31st Street. We would visit her often and I would do odd chores around the house. When I was finished, I could visit my grandmother’s neighbors, one of whom was a tinkerer/sculptor and had a little workshop in his garage. I was always fascinated with his little projects.

Shopping during the 1950s generally meant a trip to downtown Miami. Such trips in late November and early December could mean only one thing, Burdines. They had a giant illuminated Santa on the Miami Avenue crossover, and the west-building roof had a small carnival with rides for kids. Moms would drop off their children while they shopped. The other major shopping venue was Shell’s City (aka Shell’s Super Store) on Seventh Avenue and 58th Street.

Another of our family’s regular vacations consisted of trips to Key West to visit my aunt. We would drive from our house all the way on U.S. 1, the only route. Bridges were narrow and the guardrails were rails from the old Florida East Coast Railway, destroyed by the Labor Day hurricane of 1935, before my time. On the way down, we would stop at Shorty’s Bar-B-Q in Miami or Sid and Roxie’s Green Turtle Inn on Islamorada.

Dade County Junior College opened officially in 1959 at Central High, but didn’t have a real campus until 1963. They opened Building A, later called Scott Hall, at the old Naval Air Station. I commuted to the campus daily, along with 30,000 other kids in 1963. My drive down Northwest 119th Street took me past the old Bottle Cap Inn and the Tomboy Club.

Miami life was simple when the white and yellow pages fit in one book.