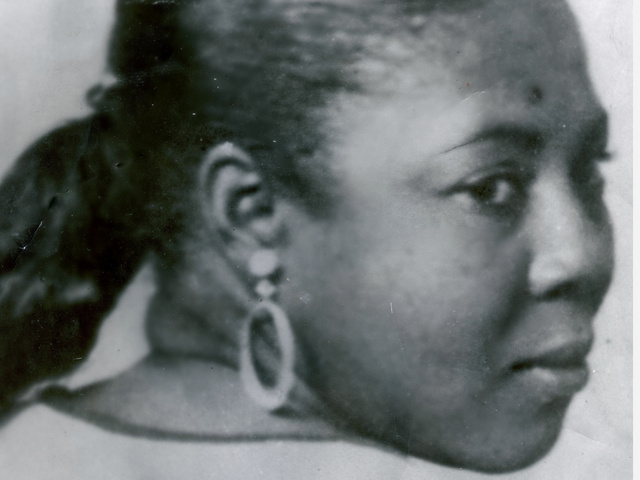 Miami will always occupy a special place in my heart. My beloved grandmother spent such a great portion of her life here that the two are now synonymous in my mind. She had impeccable taste, which means Miami is the second-greatest city in the world; of course, our native Petionville, Haiti, comes in first.

My grandmother passed away April 2, 2012. I know she is in a better place now. The nationalist in her wanted to reach eternity via Haiti. Since that was not meant to be, Miami opened its arms – as always. It is where her remains are interred.

With a smile brighter than all the lights on Ocean Drive, my grandmother was the city personified. She wrapped her head in colorful scarves, reminiscent of Miami’s golden age, pulsing with the roar of turquoise and chrome convertibles. She loved the Fontainebleau for its Old World glamor and once-upon-a-time elegance.

My grandmother’s Miami was quite similar to our native country. Many friends gathered on her porch on Sunday afternoons to enjoy lodyans – a form of storytelling drenched in humor.They reminisced and laughed about old times back home. Most of her friends spoke only Creole, even if they had lived in the States for decades.

Her front door stayed open all day – as it did in long-ago Haiti. Restaurants that sold food cooked like back home, if not better, were just around the corner from her house. The grocery stores’ shelves were stocked with the ingredients she used to buy in Haiti’s open-air markets. Miami was her second Haiti. When back home was not accessible – because of various coups d’état and other inconveniences, Miami was her sanctuary.

My grandmother’s last visit to Haiti was in late 2009. She was thrilled to see the house in which she planned to spend what remained of her life. She had spent years sending money for builders to make her house just so. She was ready to move in the fall of 2009.

When she flew home to begin the rest of her life, friends and neighbors received her as though she had never left. Just as they did in Miami, everyone gathered at her house for marathon conversations and tasty food.

But the longer my grandmother stayed in Haiti, the more she pined for “home” – meaning Miami.

Three months after arriving in Haiti, she decided she had lived so long in Miami that perhaps she could not live anywhere else, including her birth country. She flew back to Miami on Jan. 10, 2010.

Two days later, a devastating earthquake struck Haiti, killing hundreds of thousands. She sobbed for the lost lives. I sobbed with her, but took comfort in the fact that she had returned just in time; she might have been among the still-unaccounted-for victims. That would have destroyed me.

As stories poured in about the quake’s aftermath, the utter destruction, the chaotic medical situation, my grandmother wept in silence. Her South Beach smile dimmed. Not even Miami could console her.

She mourned the fact that she could no longer return to her other, sometime home. She mourned the loss of long-ago Haiti – the Haiti that pulsed with turquoise and chrome convertibles, the lush and Miami-green Haiti, the Haiti she knew as a child. She was secretly grateful that her adopted city’s arms were always ready to envelop her. Miami had become her own private Haiti.

Five months before my grandmother passed away, she was admitted to University of Miami hospital. With each passing day, she became more and more frustrated about having to be in a hospital bed. She was accustomed to living life standing up. She detested the hospital gown, and wanted instead to wear her colorful wardrobe that reminded me of the sea, sunshine and coral reefs.

She told the doctors to send her home. By “home” she meant both Miami and Haiti. The intensive care unit was drab. It lacked vibrancy. It lacked life.

My grandmother has been gone two years now. I will always owe Miami a debt of gratitude for opening its arms to welcome my grandmother for as long as she wanted to be here. Whenever I come to the city, I sense her presence in the air. Everything she loved about the city is still here: the Fontainebleau, the banyan trees, the blue-blue water that hems the coast.

And just as my grandmother did when she was alive, I go to stores where only my native language is spoken. I eat Haitian food morning, noon and night. (I’ll admit I love Cuban cuisine just as much.) I visit Libreri Mapou and chat with the friendly owner and customers who cannot get enough of Haitian literature. Each visit makes it clear to me why my grandmother loved Miami so.

Perhaps one day, the city will claim me, too.