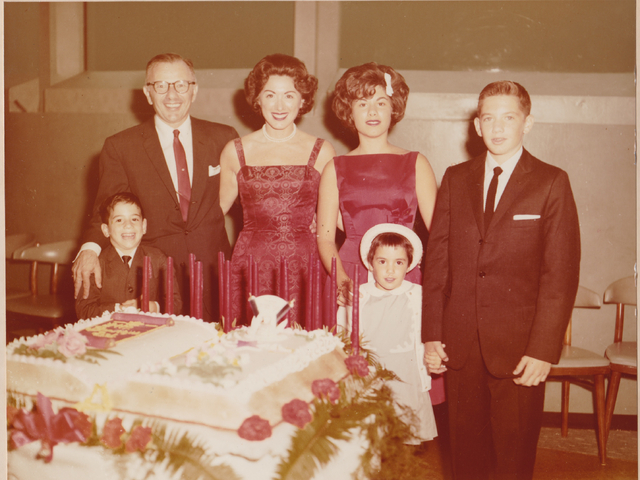 I was born at Coral Gables Hospital in 1948. My mother was from Brooklyn, my father from Morriston. He was a CPA, in the Giller Building on the Beach, at the exit off the Julia Tuttle Causeway onto Arthur Godfrey Road. He said that every day when he drove across the causeway, he marveled at the beauty around him.

We lived in the Gables – first on Alhambra Circle where the UM fraternities were, and the athletic field and tennis courts. We played touch football and tennis there on weekends; no one bothered us. Then my family moved to the corner of Old Cutler Road and Santurce Avenue, into a one-story ‘50s house, now replaced by a mansion too big for the property.

There was only vacant land across the street, east of Old Cutler. I asked my father why nobody built there, and he said that it was too close to sea level; it would never be developed. Now it’s Cocoplum. Temple Beth Am was surrounded by vacant land. When they built Dadeland, my parents said that no one would live that far out.

Matheson Hammock was quiet and uncrowded—no Red Fish Grill. We swam at the Venetian Pool. On Sundays my dad would get bagels and lox at Sam and Carl’s on Red Road at Sunset. Across the street was the Holsum Bakery, with that wonderful smell. South Miami was small and sleepy, like a village. Sometimes we went to Pumpernik’s and Wolfie’s on the Beach — the best pastrami sandwiches I’ve ever tasted.

One of my father’s clients was the Melaleuca Motel on Collins Avenue, and when I was little we stayed there in the summer – two rooms and a cabana. The ocean, the beach, the pool, eating out, lots of other kids – I loved it.

I went to first and second grades at Sunset Elementary, then to West Lab at UM (my mother put me on the waiting list when I was born). I had a friend who would take me to his country club in the Gables, and defiantly introduce me as “my Jewish friend Joel.” Nobody reacted, but we all knew that there were Jewish and non-Jewish country clubs, and restricted hotels. Most were more subtle than the one with the sign that said “Great Views, No Jews.”

I road my bike to Ponce Junior High, racing up and over the bridge on Granada. In ninth grade I took drama because there weren’t any tests, and after a few silly skits in class, my teacher, Mrs. Firestone, cast me as the lead in the school play. When I tried to get out of it she said that her class wasn’t a democracy. It was my tipping point.

Everything I’ve done since has involved public speaking – debating in high school and college, moot court in law school, writing speeches in D.C., and then appellate law. Mrs. Firestone wouldn’t remember me, because she was just doing her job — being a teacher – and unfortunately, I never told her.

Gables High was all white, with the first Cuban students from the first wave of immigrants. My world was all white. I remember “White” and “Colored” water fountains, public restrooms, and beaches. Virginia Key Beach, for the “Colored People,”was beautiful, and my friends and I were welcome there.

I drove the ’56 Chevy that my father gave me when he bought his burgundy Mustang; it took all my strength to turn the wheel. My friend Larry and I would drop off our dates and go to the Royal Castle on the highway around 22nd Avenue, and eat four or five of those small hamburgers with the soft buns and the little pieces of cooked onions, and drink birch beer.

A favorite hangout was the Hot Shoppes Drive-In off U.S. 1 at Bird Road. We took our dates to the Flick Coffeehouse on Ponce near the university to hear folk music. Movies were at the Miracle, Gables and Riviera Theatres. Next to the Riviera were Spec’s Music and Swenson’s Ice Cream.

Some of my friends had ski boats, which we took out on weekends. At that time you could water ski anywhere you wanted. During the Cuban Missile Crisis there were military convoys everywhere. Our teachers taught us to crouch under our desks with our arms over our heads in order to survive a nuclear attack.

In tenth grade English they announced on the public address system that President Kennedy had been shot. My first political campaign was Miami Mayor Robert King High’s run for governor. We took a small plane to Tallahassee that was held together by bubble gum. It was terrifying.

The public schools in South Florida were among the best in the nation; some of the smartest people I’ve ever known went to Gables; fortunately for me it had a great debate team; and Gables and Miami High had two of the best football teams in the country. In 1965, the game between Gables and Miami High drew 48,000 people to the Orange Bowl. Miami High’s 14-7 win ended our 28-game winning streak. It was devastating.

When I left for college I had no intention of coming back. The place was sleepy and Southern and in many ways prejudiced. But it had changed radically when we decided to move back from D.C. 15 years later to raise our family. It was becoming a center of art, sports, commerce and finance – bilingual, international. It had acquired a buzz that still buzzes. And the lawyers here are as good as the best lawyers anywhere—in particular my colleagues for 25 years at Podhurst Orseck. I’ve never regretted coming home.