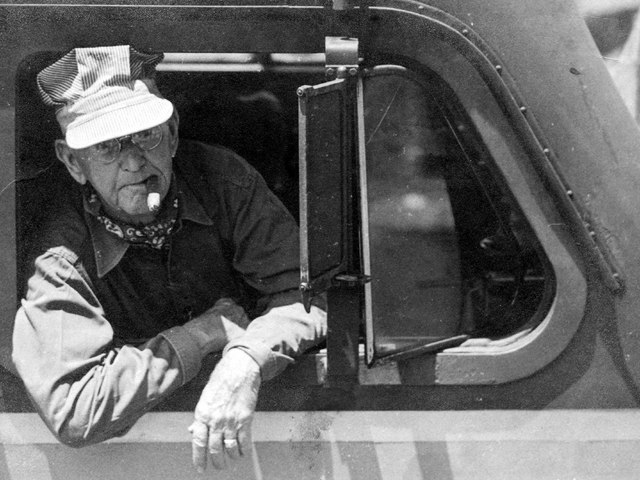 Growing up in Miami Springs during the 1940s was a sunny and happy experience if one was young enough to avoid the anxiety and trauma of World War II. I was one of the lucky ones because my dad was able to stay home and work at his job in telephone communications.

Each morning, he would drive downtown in his little gray Ford coupe, the blue gasoline sticker in the right window joined by the red one for Civil Defense. I was proud of his sense of responsibility working for Southern Bell Telephone. Most of us were still on party lines, but we felt good about reliable communication.

My classmates in second grade at Miami Springs Elementary were a mix of varied family situations. There were several dads overseas, but it wasn’t discussed by any of us at school. During this time, I happened to meet an outstanding grandfather of one of my classmates. Anne was my best friend .

The highlight of our friendship was the opportunity to meet her grandfather, an early engineer with the Florida East Coast Railway. It was a short walk to her house and, as we left school one September afternoon, she saw his bluish-gray car parked out front under the big pine tree and said, “You have to come inside and meet Choo-cha-bah!”

Taken aback by the name, I asked her tentatively, “Who’s Choo-cha-bah?”

She replied, “He’s my grandpa, and he’s real nice!” So I followed her into the house and there was a giant man, sitting in a big chair, talking with Anne’s mother and younger brother, Sonny.

Her mother met me with a big smile and introduced me to the visitor. “This is Anne’s grandfather, Choo-cha-bah. He works for the railroad!”

He then stood up, gave Anne a big hug and offered his hand to me. He had a kind manner and I felt comfortable. I didn’t stay long; I talked a few minutes about school, and then left for home. It was wonderful for me to have a new friend who looked like he could be anyone’s grandfather. Tall, strong, and gentle he was, and I was to learn he had made a valuable contribution to Henry Flagler’s progress in bringing the railroad down to Miami.

“Choo-cha-bah” will be referred to by his name, Fred A. Daniel, as I relate the rest of my story.

He grew up in the Palatka-Orange Lake area as a boy, where his father was a cattle driver and worked irregular schedules to bring in a salary. His mother worked as a milliner, which meant she would fashion hats out of available material and make a little money when she could. Historically, I’m placing them in the late 1870s. I’m not sure how many children were in the family.

Not much was going on in North Florida, other than what an individual could conjure up for himself. Cattle roamed freely, grazing where available, and offered an opportunity for individuals with a horse and good strong rope to bring home a starting source of beef. Smaller wildlife was available; quails and wild geese roamed freely, but you needed to be able to capture them and secure them. Small farm patches with greens, corn, and maybe a fruit tree could supplement the food needs.

Let’s get back to Fred.

He went to school for three years and then started looking around for more opportunities to help out. He got close enough to the Jacksonville-St. Augustine area to see that Henry Flagler had arrived and was making plans to use the Florida climate and his wealth to establish a new home base for his sick wife and his work interests. He had become a millionaire working with John D. Rockefeller and Standard Oil in Ohio. Arriving in the beautiful sunshine of North Florida in the late 1800s, he and his wife both fell in love with the area.

Mr. Flagler worked to connect the railroad from Jacksonville down to St. Augustine. With that accomplished, he built the beautiful Ponce de Leon Hotel as their new residence. As you know, in business one thing leads to another, and he saw opportunities to spread the business in several directions. In 1888, he added the St. Augustine and Palatka Railroad to the St. John and Halifax railroads. At this point, he had a unified rail system down as far as Daytona Beach.

Do I need to remind you who was walking around this part of the state looking for miscellaneous work opportunities? Yes, Fred found the opportunity to work, carrying water for Flagler’s workers. That’s what he told us of his first job. Not very difficult, but very necessary to fire up the engines and satiate the thirst of the laborers.

Fred learned a lot by just being on the scene. Without qualifications, he was carrying whatever was needed from supply location to work station. No doubt, he learned quickly, for he advanced and continued to work for Flagler and the Florida East Coast Railway, even through the time the FEC lost its battle with “Hurricane 1935” in the Florida Keys.