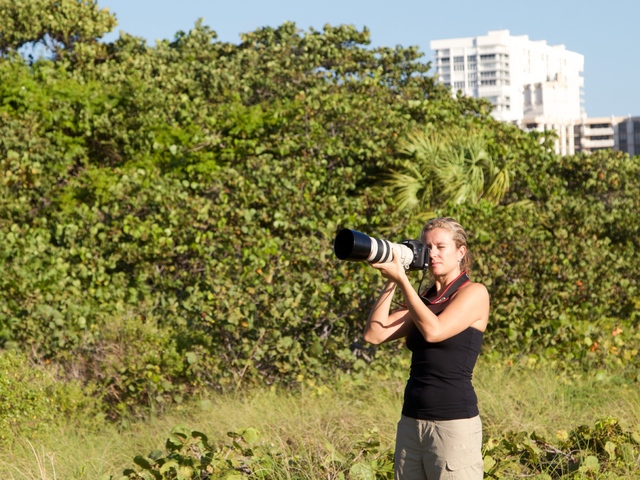 A vast field of lights met my gaze as I flew into Miami for the first time in the late ’90s. To the west was the blackness of the Everglades and to the east, the ocean, but below me were lights — a breathtaking array of tightly packed luminescence, tantalizing and exciting. And ironic, as my love of nature had apparently lured me to one of the more densely packed urban areas in the nation.

I was moving to Miami for graduate school, to study tropical amphibians at Florida International University. Yet as I settled into town those first few months, the jungles I yearned for felt a lifetime away. I was trapped by concrete. The yards in my neighborhood were cemented over; my commute was a maze of gray; I spent my waking hours within the thick concrete confines of the biology department’s bunker-style building.

I remember my feeling of liberation the first time I escaped the monotony and entered the lush oasis of Coral Gables, passing under archways of spreading oaks laden with Spanish moss, exploring Fairchild’s tropical gardens and, at Matheson Hammock, discovering forest unlike any I had experienced. Elation filled me the first time I crossed the Rickenbacker Causeway and discovered natural beaches with intact dunes at Bill Baggs State Park. It was a side of Miami I had somehow been ignorant of. I had spent time in the Everglades, but what I needed were everyday doses of green.

I moved to the Gables. I became a nature guide at the Marjory Stoneman Douglas Biscayne Nature Center in Crandon Park. I worked part-time for the Institute for Regional Conservation, where I expanded my animal-centric interests to include native plants.

The more I learned about Miami’s natural side, the more I appreciated its subtle but stunning mix of tropical and temperate species. I had moved well beyond my concrete confines, but somehow the improvements weren’t quite enough. I finished my degree and headed for Australia.

I spent three years wandering the wilds of Australia, New Zealand, Borneo, Thailand, Cambodia, Vietnam and Laos, teaching in China, and crewing on a sailboat in the Bahamas. Writing and photography became my new means of interacting with the natural world, but it left me baffled as to a career path. Where and how could I combine these with biology?

And as I grew weary of living out of a suitcase, my thoughts wandered toward anchoring somewhere more permanently. A home base maybe, somewhere I could plant roots. I never consciously considered Miami a contender, yet it kept re-emerging on the periphery of my thoughts.

How could this heavily concreted community with mere patches of green be calling to me? My travels had taken me to more-pristine beaches, more-luscious forests, more-impressive vistas and more-intriguing wildlife, and to cities with more environmental awareness and better green space.

But Miami was the overall package. Beaches, forests, wildlife and green space, although scattered, were here. The city held something for everyone. You could find your niche, perhaps even a green one. It was the kind of place where one person might possibly make a difference.

Warily, I moved back to Miami in early 2006. I resumed residency in my former Gables neighborhood, reconnected with friends and began working full-time for the Institute for Regional Conservation. My project was Natives for Your Neighborhood, the online native plant resource. My role was to add the animals. I realized that conservation through backyard gardening was a solution to the concrete world that had so jaded me initially.

Why was Coral Gables such an oasis? Because individual yards and communal spaces were so thoughtfully landscaped with oaks, figs, palms and pines. There were birds in the trees, butterflies on the flowers, and crocodiles in the ponds. There was space for Miami’s subtropical blend of plants and animals.

Given the tools and knowledge, residents of the rest of Miami could create just as tantalizing an oasis. Yet because South Florida’s natural environment is so special, it didn’t take long to realize that those tools did not exist.

There are piles of books on native plants, wildlife gardening and how to achieve naturalistic landscaping for temperate North America. There are even a few aimed specifically at Florida. But South Florida is subtropical. We are different. We are special, and we need our own set of unique books and resources.

I’ve spent the past five or so years creating my own backyard sanctuary on Key Biscayne — testing wildlife gardening techniques to share with others. I’ve spied on the red-bellied woodpeckers that nested in my coconut palm, applauded the successful rearing of two broods of eastern screech-owls in my nest boxes, and celebrated when a purple martin colony finally settled in my martin house after years of futilely playing their calls over loudspeakers every morning of their season to attract scouts to my yard. Now my yard is filled with live calls.

Following these yard successes, I’ve helped complete South Florida’s first bird gardening books — Attracting Birds to South Florida Gardens and Birds of Fairchild. They have allowed me to combine my biology, writing and photography interests in a meaningful way. It’s Miami; I found my niche.

I am proud to say that I am now part of this city of sparkling lights, and being here no longer seems ironic.