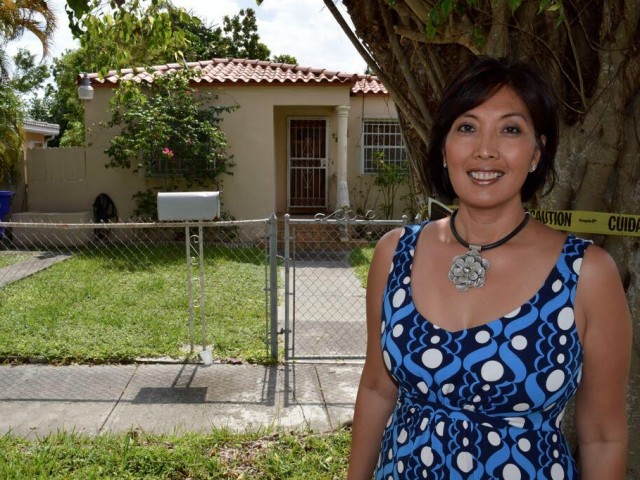 I moved to Miami after returning from my Fulbright Scholar Program in 2002. The same muggy air, car horns, heat that I left in the Philippines greeted me as I walked out the doors of Miami International Airport.

The cab driver spoke to me in Spanish and I understood everything he said, but I was slow to respond. I had spent the last year speaking Tagalog, a language full of Spanish words after 300 years of colonization. When I instinctively replied to him in Tagalog, he just kept on, unfazed, in Spanish.

My job at the University of Miami started right away. For the first year, I lived in Kendall, or “Kendalia” as I liked to refer to it. It took more than an hour in rush-hour traffic to get to and from the Coral Gables campus. In Manila, traveling five miles from Quezon City to Makati had taken an average of two hours each way. Now, instead of getting anxious, I could let go of the frustration and instead spend time listening to the Latin stations, dancing in my car and practicing Spanish.

In 2009, I moved to a neighborhood along Coral Way, a historic urban boulevard that runs through Miami from Brickell Avenue to 37th Avenue. My house had been built in 1939 along with other bungalows and mission revival-style homes. Everyone on my street spoke Spanish almost exclusively.

My casita stood between two houses of the sadme style, and within these houses lived viejas. On the right, there were three widowed sisters — Marta, Olga and Paula. On the left was Elsa, also a soltera. The women were best friends, and I’d see them on the sidewalk in front of my house, sometimes laughing together, sometimes shouting in anger. Right away, they befriended me, a single woman much younger than they were and never married. They called me China even though I told them, “Yo soy Evelina, la Filipina. No soy China.” They laughed at me, calling me China anyway.

Elsa was a small and quiet widow. From afar, I never knew how she was feeling, but face to face, I could see it in her eyes and in the path of her delicate wrinkles. Every day I would notice her standing by the chain-linked fence in her front yard, watching the street, waiting for the mail, and talking to passersby.

One afternoon I brought her a mango from my tree.

I can hold a polite conversation in Spanish, but when it gets malalim — deep — I mix my languages. Sometimes Tagalog comes out when I mean to speak Spanish, or vice versa.

Elsa recounted the story of her life to me at her kitchen table. She had suffered bouts of depression since she came to this country. Never in Cuba, only in this country. She wouldn’t even say it — the United States of America. Solomente en este pais, pero nunca en Cuba. These days she felt nervous constantly. Everyone she loved had died — su mama y papa, su esposo y hermana. Seven years ago, her husband and sister had died months apart. Though she had the abuela sisters, who took her everywhere, and a daughter in Boston, she couldn’t calm her nerves. The noise of her memories crowded her head, kept her up at night.

We sat for a long time. She picked up the mango, smelled it, and handed it to me. “Que rico,” she said.

I told her she needed a novio. She laughed.

When I married last year, Elsa quickly took to my husband, who spoke absolutely no Spanish. They exchanged words each day. She sneaked up behind me one day to tell me my husband was a good man. “Y guapo tambien,” I told her jokingly. Yes, yes, he’s handsome, so be careful, she said, women will try to take him away from you. She gave me a look. I told her I’d be careful. No mujer would come between us. We laughed and then she told me she liked my dress. A moment passed, and she said, “Tu esposo es una buena persona.”

Last month, when my husband and I came home from a trip, nobody was standing at Elsa’s gate. On the fence and the trees nearby, someone had posted “No Parking” signs.

“Something’s wrong,” I told my husband.

“It could be anything,” he said.

For days, the neighborhood was quiet. The abuela sisters were nowhere to be seen.

One day soon after, my husband came home and told me he had found out what happened to Elsa.

“I don’t know. It was in Spanish. But she was talking, talking, talking and she went like this.” He put his hands together and leaned his head on them with his eyes closed. “And then I said, ‘She died?’ And she said, ‘Sí, sí, sí.’”

Elsa was not the first to pass away since I moved into this casita. There was an old man across the street during my first year. And last year, Marta, one of the abuela sisters, died of a brain tumor. Now Elsa. I like to think the spirit of these viejas are circling the bamboo, the mango and the avocado trees, whistling love songs, blessing us from afar. I like to think they are a part of a Miami that will never die.

They have taught me that you don’t need the right words, or even the same language, as long as you are willing to sit with one another and listen.