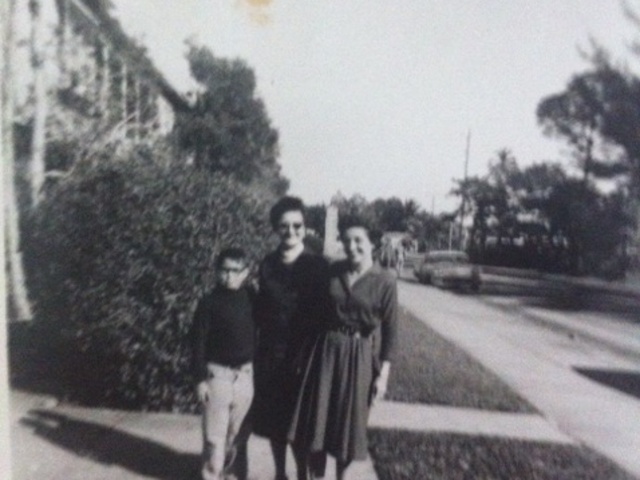 I remember looking out the window as the plane took off from Havana.

It was Aug. 9, 1960. I was 15 years old and leaving my country with my mother and brother to reunite with my father in Miami. He had left months earlier to find schools and a place to live. We didn’t realize it would be for good.

My dad, an attorney with a passion for travel, got a job in sales with Guest Airways and an apartment at 23 Phoenetia Ave., Coral Gables. He enrolled my brother and me at Merrick Elementary and Coral Gables Senior High, respectively.

Two other families we knew from Havana lived in the same eight-unit building, and we would gather in the small patio in the early evenings. But Miami was a very quiet town in those days and we were asked to move.

We did, a few blocks away, to Madeira 25A, an apartment building that has also gone condo, and gone are the wooden stairs with the telling creak that would let me know Abuela was coming down the stairs. Gone, too, are the Coliseum, a great place to bowl, hang out and listen to Top 40 in the jukebox, and the old Coral Gables library, which I remember every time I smell the rain.

My dad opened a travel agency, Caribbean Cruises, on Ponce de Leon Boulevard next to the Coral Theatre. Neither has been there for years. My mom went to work at the Shelborne Hotel in Miami Beach as an executive secretary to the general manager, which meant she ran the place. That is where I had my honeymoon a couple of years later and where, a couple of years ago, I went for karaoke.

My parents made those lean early exile years a warm and fun experience. We had an old car that my dad named “Can you give me a little push,” and we took car trips to Matheson Hammock and Crandon Park. We sang along with musician Mitch Miller and played Clue and Monopoly and we were active on the Cuba issue and even slept in Bayfront Park once to protest something WCKT news anchor Wayne Farris had said.

My boyfriend and many friends were in the Brigade 2506 that invaded Cuba in 1961. He went to prison and the experience changed his life and the lives of Cubans everywhere. But my parents helped make the memories of those times mostly good ones and, at 16, wounds heal fast.

In Miami, I discovered tuna fish sandwiches on plain white bread and French fries with ketchup. I also discovered prejudice. Looking for places to rent, we saw signs that read: “No blacks. No dogs. No Cubans.” The counters at Woolworth and Grant’s were segregated, so were water fountains and buses.

The good old times were not good for everyone and it almost seems impossible that those memories could co-exist with so many wonderful ones: driving up to Jimmy’s Hurricane on U.S. 1 and Bird Road, where servers on roller skates would come to the cars, just like in the movies; parties at the Venetian Pool, Friday nights at the Pizza Palace, window shopping on Miracle Mile and snacking at Jahn’s Ice Cream Parlor (where John Martin’s Irish Pub now stands). Sundays, after mass, the go-to spot was Walgreens downtown.

There were Friday night dances at the Coral Gables Youth Center and sock hops at the school gym, where rock ‘n roll was danced the way many have only seen on TV. There was the thrill of a pep rally and the way the air smelled around football season – I don’t know about your high school, but we were the Cavaliers, and that meant something!

There was a Howard Johnson’s inside the old Coral Gables bus station and we would stop on our way home from school for their famous “caramel” ice cream ( Dulce de Leche did not come into its own until 40 years later).

My younger brother was born at the old St. Francis Hospital in Miami Beach in 1961 and one year later, I graduated from Gables High, went to Dade County Junior College and had my first part-time job at Jackson Byron’s in downtown Miami. My first real job was as clerk typist at the Welfare Department; my husband worked three blocks away at what used to be Mary Jane Shoes on Flagler. We had met at the Vedado Tennis Club in Havana as teenagers, reunited here and got married at the Church of the Little Flower in Coral Gables in 1963. Our three children and four of our grandchildren have been born and raised in Miami.

When I first came to what is now my city, there was hardly anything open after 7 p.m. The Freedom Tower was the tallest building and Dadeland Mall was considered the “boondocks.” Our now ubiquitous Cuban coffee could only be had at home – Jose Enrique Souto, Sr., a family friend and the owner of Bustelo and Café Pilon, would deliver bags to our home from his truck.

My husband developed his professional career in computer systems at Eastern Airlines and, after its demise, became an executive at System One and EDS. When writing got the best of me, I began working at Harper’s Bazaar in Spanish, followed by a stint publishing Eventos Miami, a local social/cultural magazine. Miami in the ‘80s was ripe for that decadent scene: Ensign Bitters, Cats, The Mutiny, The Jockey Club and Regine’s in the Grand Bay, where Julio Iglesias visited often and the Dom Perignon flowed easily.

I’m presently retired from advertising, and we just celebrated our 50th wedding anniversary, right here in Kendall. Most of our family lives here and has grown with Miami. Is it perfect? No. But it is ours. And it is home. So when someone tells me we have the rudest drivers and we’re a banana republic and yada, yada, yada, I say “just move, chico.”