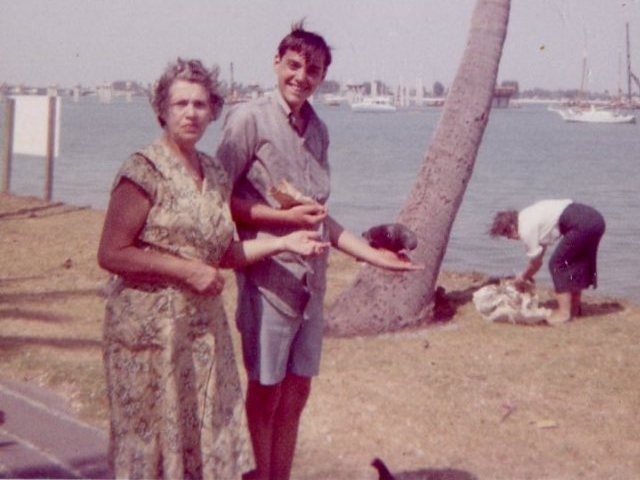 I was born in Brooklyn, New York, in 1947. My parents were also born in Brooklyn, and their parents emigrated from Russia to the United States between 1910 and 1912, arrived at Ellis Island, and settled in New York.

I have great memories of growing up in Brooklyn and remaining in Brooklyn as an adult. I taught English at Meyer Levin Junior High School from 1970 until I retired in June 2001. After retirement I moved to Rio de Janeiro, Brazil, and lived there for five years. It was a wonderful experience!

Upon returning to New York in 2006 I found dealing with the cold winters more and more difficult. Finally, in August of 2010 I made the move to Miami, and I am happy to say that I am now a permanent resident of “The Magic City.”

Actually, my connection to Miami goes back to 1955 when my father’s parents became “snowbirds” and began wintering in Miami.

They bought a home at 1325 SW 40th Avenue in Coral Gables, and my parents, sister, and I drove down every year during Christmas vacation as a family until 1964. I continued to come down during my college breaks until 1970. Between 1955 and 1962 we stayed with my grandparents in Coral Gables. My grandfather then sold his house and leased a hotel on Miami Beach – The Premier Hotel on Collins Avenue and 8th Street.

Of course, then it was called Miami Beach; now it’s called South Beach, and the hotel has become a Victoria’s Secret store. For our visits during 1963 and 1964, my parents opted for more comfortable accommodations.

In 1963, we stayed at The Cadillac Hotel on Collins Avenue and 40th Street, and in 1964, my last trip with my parents, we stayed at the Chateau Resort Motel in Sunny Isles. I continued coming down until my grandfather retired from the hotel business in 1970, and that was the end of my Miami connection for twenty years.

I do have some very fond memories of my childhood and adolescent visits to Miami and Miami Beach, and here they are:

– Going to the beach and zoo at Crandon Park. I remember the peacocks walking around freely and the miniature train ride around the zoo.
– Swimming in the Venetian Pool.
– Stopping at Burger King, the first Burger King I had ever been to (there were no Burger Kings in New York at the time), for a Whopper and a chocolate shake.
– Going to Tyler’s Restaurant on Ponce De Leon Boulevard. I especially remember the chocolate and banana cream pies.
– Going to the movies at the Coral Theater on Ponce De Leon Boulevard and the Miracle Theater on Miracle Mile. I remember seeing “Auntie Mame” at the Miracle.
– Going to Pizza Palace and Krispy Creme on SW 8th Street. It wasn’t called Calle Ocho then.
– Buying fruit at the fruit market on the corner of Le Jeune Road and SW 8th Street I can still smell the wonderful aroma of the oranges.
– Feeding the pigeons in Bayfront Park and going to Pier Five in downtown Miami.
– Passing Burdines and seeing the amusement park on the roof and the big neon Santa between the buildings.
– Going to the original Parrot Jungle and Monkey Jungle and taking an airboat ride in the Everglades.
– Going to FunLand Amusement Park on NW 27th Avenue and 79th Street.
– On Miami Beach, eating at Pickin’ Chicken, Picciolo’s Italian Restaurant, Wolfie’s, on 21st Street and on Lincoln Road, The Noshery at the Saxony Hotel, Famous Restaurant on Washington Avenue, and Hoffman’s Cafeteria on Collins.
– Going to the movies at The Caribe Theater on Lincoln Road. I saw “The Planet of the Apes” there in 1968.

My parents retired in 1977 and moved to Florida. They bought a condo at Kings Point in Delray Beach. I would come down to visit them during my Easter breaks, but this place was not my cup of tea. Then in 1990, I took a ride down from Delray to Miami Beach with my parents, and the magic hit me again.

At that time, South Beach, as it is now called, was going through a renaissance, and I was hooked. It was at that point that I started to think that this is the place where I would like to retire.

Now, here I am back in Miami, sadly, many of the places I remember from my childhood and adolescent visits no longer exist. But Miami has moved forward and is now a world-class city, and I am happy to be a permanent resident of this “Magic City.”