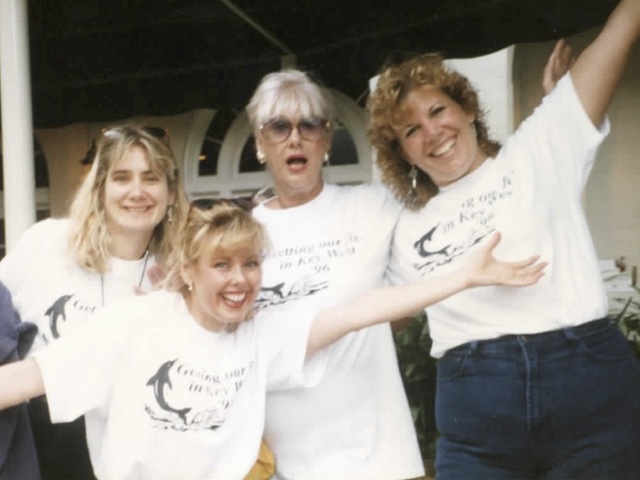 Steve hated the cold and the sleet and the snow. And he loved fishing and baseball.

Steve and I visited Florida on vacation in 1957, and we stayed at the Nautilus Hotel. Even the names of the hotels conjured up visions of far-away, exotic lands — Casablanca, Sans Souci, Marseilles, Fontainebleau, Eden Roc, and Seville.

In 1972, my aunt rented an apartment next to the Diplomat Hotel where, each night, famous stars performed, and she would take us to her favorite restaurants: Rascal House, Pumpernik’s, Corky’s, and the ever delicious Tivoli.

In the end, I gave in — with a compromise. We would move to South Florida but not to Key West.

So in 1994, we moved into the same building on the beach where my aunt lived, next to the waiting-to-be-imploded Diplomat Hotel. I soon discovered that the heat didn’t bother me at all, and having a pool where people congregated and created friendships certainly helped us quickly get used to our new home.

Strolling down Lincoln Road years ago, when the middle of the street was still open to traffic, was always thrilling. And Steve and I loved Hialeah Park, the race track where thoroughbreds ran and beautiful flamingos fed along the ponds in the sculptured gardens. The elegant betting area bore no resemblance to any race track we had ever been to; Hialeah was a gem of mahogany-sculptured paneling that conjured up old-fashioned splendor and always made me feel out of place making a two-dollar bet.

I liked to visit Fairchild Tropical Botanic Garden because not only were the gardens colorful and fragrant, but otters frolicked in the small pond there. Steve and I always enjoy visiting the Biltmore Hotel, in Coral Gables, where we walk around the immense swimming pool and recall that Johnny Weissmuller and Esther Williams swam there. The GableStage theater, housed at the Biltmore, offers memorable performances that each season garner awards.

Steve enjoys sporting events, and he followed Tiger Woods on the greens of the Doral Country Club, and on Sunday afternoons we would go to Joe Robbie Stadium, now known as Sun Life Stadium, to watch the Miami Dolphins play.

Miami also has wonderful museums, such as the Bass and the Wolfsonian. One of the most astonishing exhibits I ever saw was a display at the Bass Museum: a kitchen, living room, and a garden all made out of beads; even the kitchen sink and faucets were made from beads.

The Holocaust Memorial on Miami Beach always brings me to tears. Secluded in a garden and surrounded by sculptures depicting the horrors of the concentration camps, a giant hand emerging from the exhibit’s center. The hand itself is covered with naked, emaciated bodies climbing up to the wrist, evoking the horrors and the sadness of the millions lost.

I still love the old, Art Deco buildings of South Beach, now renovated into chic boutique hotels. Latin music erupts from Gloria Estefan’s restaurant on the west side of Ocean Drive. On the beach side of the street, we always would stop to admire the sand sculptures. I miss the artist who created these fanciful cities out of sand stretching a quarter of a block in length and lasting perhaps for months. After a while, he would start all over, a new creation from nothing, but now he, too, seems to be gone for good. Also gone — and sorely missed — is that fabulous panoramic mural on the wall of the Fontainebleau Hotel depicting an Eden-like garden; it always felt as if we were driving right through the arch and into the hotel.

I used to love the fatty corned-beef sandwiches at Rascal House, and now at Jerry’s Famous Deli, and I revel in the tastes of Chinese food at Christine Lee’s.

When Steve and I moved to South Florida, I found all the things I really wanted: serious, great theater and musicals, better than what is offered on Broadway.

Better yet, my children now live in South Florida, too, and heaven, in the shape of my grandchildren, came with them. Now I wouldn’t want to live anywhere else. I read somewhere that you are truly lucky if you live near a beach. Well, then we are all very lucky to live in South Florida, surrounded by beautiful beaches.

From my windows, the ocean is a stunning aquamarine mural. “Florida? You must be kidding!” has turned into “Florida? I am sure glad I live here!”