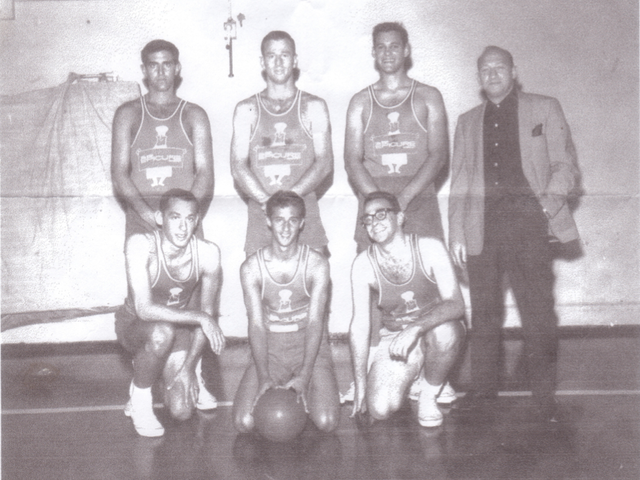 Because of my older sister Gilda’s illness, my parents, Hedwig and Benjamin Goldstein, were advised in 1942 to move from the Bronx to Miami Beach, where we lived at the La Flora Hotel on Collins Avenue.

Every hotel was filled with Army recruits, who marched on Collins Avenue holding their faux rifles, which were actually broom sticks. As a 5-year-old, I used to dress up in my Cub Scout uniform and watch the soldiers, saluting them as they approached.

Shortly thereafter, my sister and I went to the Normandy Boarding School in Normandy Isle, where I lived and was in kindergarten. .

My parents then bought a house on Alton Road and 43rd Street, where my mom lived for 68 years. On Sundays, I would take my wheelbarrow with coconuts and coconut milk and sell them to the people visiting soldier-patients at the Nautilus Hotel, a military hospital that later became Mt. Sinai Hospital.

I was 6 years old at the time, and it was 1944. I was enrolled at North Beach Elementary, followed by Nautilus School when it opened in 1950, and Miami Beach High School, which I attended through graduation in 1956.

Between ages 11 and 14, my friends and I rode our bicycles everywhere. When I rode my bike for my newspaper delivery route, there was so little traffic I could literally traverse from one side of the street to the other with little effort.

My friends also rode their bikes to school, as well as to Temple Beth Sholom, where my parents were founding members and I was bar mitzvahed and confirmed.

Most of my friends and I earned our recreational money ourselves doing an assortment of odd jobs: delivering newspapers, bagging food at Carl’s, Food Fair and other local markets, and cleaning cabanas or the pool area at various beachfront hotels.

Where the Fontainebleau stands today was the old deserted Firestone estate. We often would catch sand crabs on the beach for bait and walk onto the jetty to fish. As we got older, we rode our bikes with our girlfriends on the handlebars back to that same spot behind the estate, and on a moonlit night it was very romantic.

Weekend mornings offered the opportunity to catch local crawfish as we walked along the sea wall behind houses along the various Beach canals. Today, we’d probably get shot or arrested for trespassing. But back then it was OK, and the residents of the homes who saw us always smiled and wished us luck. We would sell the crawfish to our parents’ friends for 50 cents.

While playing basketball for Beach High, and as captain my senior year, I made life-long friends with both Coach Milt Feinstein and Chuck Fieldson. About six years ago, along with teammates Dr. Richard Berger, Lou Hayes, and Donald Klein, I was fortunate enough to be invited to Coach Feinstein’s surprise 90th birthday party.

After college graduation, I played basketball on the championship Epicure Market basketball team, which even played at the Miami Beach Auditorium against the University of Miami freshmen, including the great All-American Rick Barry.

I will never forget the train ride from Miami to Columbia, S.C. (Fort Jackson). It took almost 24 hours and stopped at every town along its path to pick up more recruits. This was 1956, significantly before integration.

Ironically, the boys from Miami Beach were all Jewish, and when we arrived at the barracks, the bulk of the recruits from North Florida, Georgia and South Carolina were unfamiliar with both African Americans and Jews. Our Miami Beach group assimilated easily and quickly with the African-American recruits. Our barrack consisted roughly of 10 boys from Beach High, five or six whites from West Palm Beach, and approximately 15 African Americans from Florida. We got along famously!

It was one of the most interesting and maturing experiences in my entire life and a great transition from high school to college. I returned from my Army service a different person.

Upon graduation from the University of Florida I went to work as a C.P.A. for my father. Our firm today has grown from Benjamin Goldstein, C.P.A. to Goldstein Schechter Koch, C.P.A.s, which employs 115 with offices in downtown Coral Gables and Hollywood. We still have many clients who have been with the firm for more than 65 years, covering three generations. We also have many clients who were my high school friends. Until 2007, three generations of Goldsteins worked at the firm: my mother, my daughter Laurie Adler, and me.

My mother retired at the age of 95, after driving herself four days a week from her home on Alton Road to our offices on Ponce de Leon Boulevard.

The reality is that I have never really left Miami Beach. Neither have most of my friends. Being a Beach guy is a unique distinction of which I will always be proud.