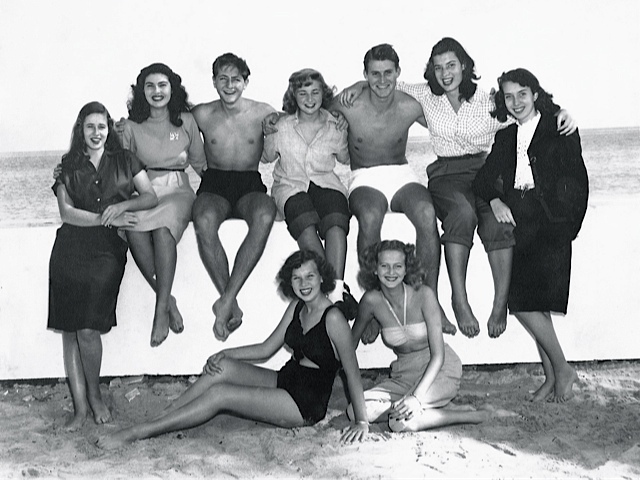 During the early 1940s, my dad was making uniforms for the Armed Forces, but by 1944 it was time to move on.

Dad had experience working in his father’s hotel in Hartford (The Hotel Bond) and his brother already owned a hotel in South Beach. When they learned The Betsy Hotel was available, Dad (Abe Libman) leased it with his brother (Lou Libman), and that began our life in Miami Beach.

The hotel was a great pride and joy. I handled the beach chairs and towels for our guests and made great tips. I knew Rocky Pomerance then, when he was just a rookie on the police force. He was on a six-month trial period, but Rocky was bright. He wore an arm band that read in Spanish that he could speak Spanish, but he couldn’t speak a word.

We leased the downstairs of the lobby of The Betsy to S & G (a gambling syndicate) and that’s where I would go and have my lunch with my brother. They would be on the phones, and we would have cold cuts – corned beef, salami, and every other kind of cold cuts you could think of, plus cold drinks and coffee, and they would help me with math homework.

When my dad entered into an agreement with the National Baptist Convention, The Betsy became one of the first hotels to allow a black convention to be held in Miami Beach. Our friends at the Henrosa Hotel around the corner promised us that nothing would go wrong, and they sat in the lobby keeping watch. It was a great convention.

When my friend Irwin Meltzer and I were teenagers, we thought a night club for teenagers would be great idea. We made a deal with the owner of the Wofford Hotel, next to the Roney Plaza, and we started the Rhythm Club, with ice cream, soft drinks, and jazz from Liberty City. It was a blast.

South Beach was a kid’s playground, but the graveyard for old people. At The Betsy, we had Mrs. Tisch, Larry and Bobby’s mother. Larry (Laurence Tisch) told me he was going to build a high-rise hotel in Bal Harbour, and call it the Americana. I told him he was nuts, too far from the beach. Was I wrong!

I was stationed in San Francisco and took advantage of being in the Air Force by going to the University of California, taking night courses. I also taught judo and life-saving training. I moved up to sergeant very quickly and was discharged 3 1/2 years later.

I was introduced by mail to Bleema, a very beautiful girl in Montreal, and after three years of writing, but not seeing her or calling her, I went to the Cornell School of Hotel Administration in Ithaca, N.Y. My father said I was so close to Montreal, I had to meet her.

Three dates and now 58 years later, we are still married, with four children and seven grandchildren. What a lucky break. You should always listen to your parents. We came back to Miami Beach, and I took over the Bal Harbour Hotel as manager.

Those years were exciting. When a friend of mine, Irwin Gars, got out of law school, we started to develop commercial real estate in New England, but remained living in Miami Beach.

Much has happened in Miami Beach, and it’s still the greatest place to live. The future of Miami Beach is in the leadership it will have, and I think the new convention center will make a big difference. Miami Beach will be here for the next generation. Enjoy it – it’s one of a kind.