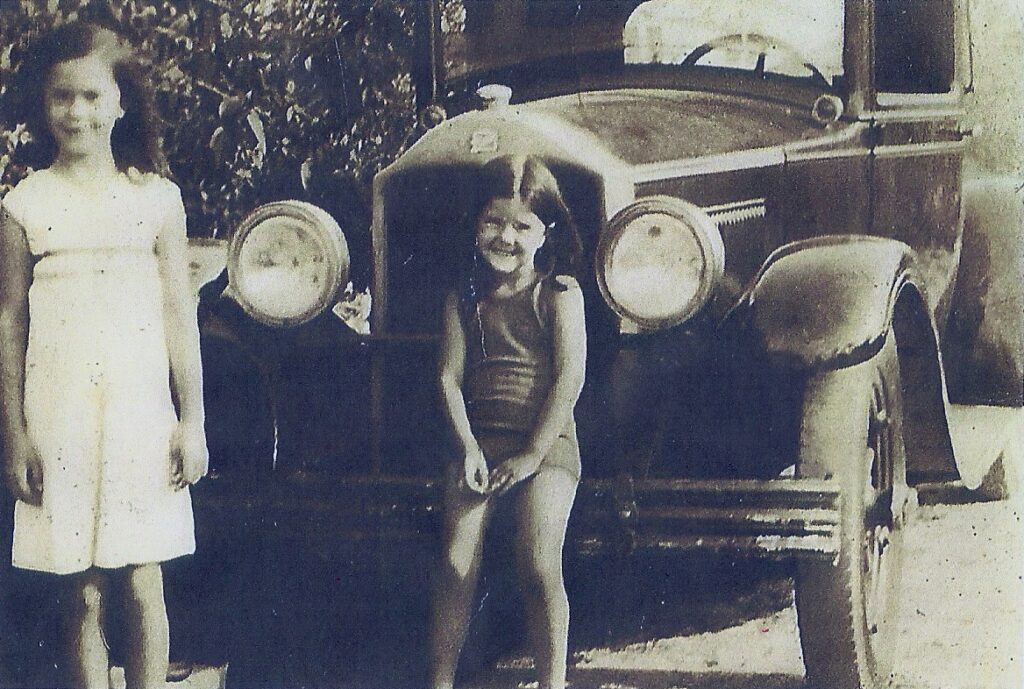 With Mom, Dad, and sister, Ange, we left Pennsylvania in October 1936 before the cold weather set in.

We rode the “Orange Blossom Special,” arriving at the F.E.C. (Florida East Coast) railway station just a couple of blocks from the tallest building in Dade County, the courthouse.

The turkey buzzards were returning to the roof as they have done every winter. When it came time to find a place to live, we rented an apartment walking distance to the beach.

I loved to go shopping in downtown Miami, mostly because we took the trolley that ran down the middle of the MacArthur Causeway.

At Easter, we would get new bonnets and chocolate eggs with our names written on them at Kress on Flagler Street.

Another must was Burdines, where the air conditioning was a huge treat. Not many places had air conditioners in the 1930s, not even the movie theaters.

The Plaza Theater used to have double features and serials every Saturday for nine cents! The Olympia (the Gusman now) in downtown Miami showed double features with a live stage show.

Swimming was the favorite way to cool off. Another was a birch beer for five cents at the air-conditioned Royal Castle. What was not to love?

Sometimes we would spend a dime to go to Smith’s Pool, which was next to the Beach Kennel Club at the southernmost point, where towering condos now stand.

Many of our neighbors were Jewish, and on Friday nights Mom would light their candles to help them prepare for the Sabbath.

At the Jewish bakeries, I was introduced to bagels – yummy! On Ocean Drive was Piccolo’s Italian Restaurant, our family’s favorite.

During the 1940s, the focus of Miami changed to World War II. Returning from the movies Dec. 7, 1941, my parents told me we were at war. At 9, I could not really understand the significance of that.

Air Force officer training took over all the hotels on Ocean Drive and Collins Avenue. Their “mess” tent was down the street from us on the beach between Second and Third streets.

Morning, noon and night, thousands of uniformed soldiers marched to meals, singing all the way.

I was so proud of them. I learned dozens of songs: Over There, The Caissons Go Rolling Along,Yankee Doodle Dandy, Oh How I Hate to Get Up in the Morning.

Often we would march along singing beside them. They would enter the mess tent and we would go swimming.

At times there were artillery target practices out on the Atlantic, which as a child, I thought was very exciting. We had “blackouts” which called for black curtains so the U-boats at sea could not see the lights on shore. Street lamps were painted black on their east side.

There was rationing of many basics, such as sugar, coffee, meat, gas and shoes. The shoes were tough since children change sizes so quickly.

On Aug. 15, 1945, I was walking on Lincoln Road when the war ended. Everyone was celebrating and crying all at the same time.

St. Patrick Catholic Church held its first Masses in a stable in 1926. I went to St. Patrick School from first through 12th grades.

While dating my future husband, Luis, who graduated from St. Mary and the University of Miami, we attended every UM basketball game at the Coliseum on Douglas Road and football games at the Orange Bowl.

At the Coliseum and in the hangar at PanAm’s Seaport (which is now City Hall) we danced to Harry James, Paul Whiteman and Tony Bennett, to name a few. Luis and I were married 61 years ago at St. Rose of Lima Church.

We went to live in Havana, where three of our four children were born. Although it is a beautiful island and we were very happy, Castro sent us back home in 1960.

Our family life centered around the Optimist Club, where our two sons played football and baseball and our two daughters were cheerleaders.

All four graduated from Monsignor Pace High School, which was a boy’s school when it first opened.

When our nest emptied in 1980, Luis transferred to Tallahassee and I taught there at Trinity Catholic School. We both became very involved in our church, “cursillo,” and ministries for the poor and prisoners.

When we retired in 1996, it was back to Miami for us. Luis wasted no time getting settled at Corpus Christi Catholic Church as a deacon.

We also now love to cruise, especially since Miami has a port conveniently nearby. Another big plus is all the restaurants with the Cuban food that we love.

One of Webster’s definitions for home is “a place of one’s affection” and that clearly describes our feeling for Miami.