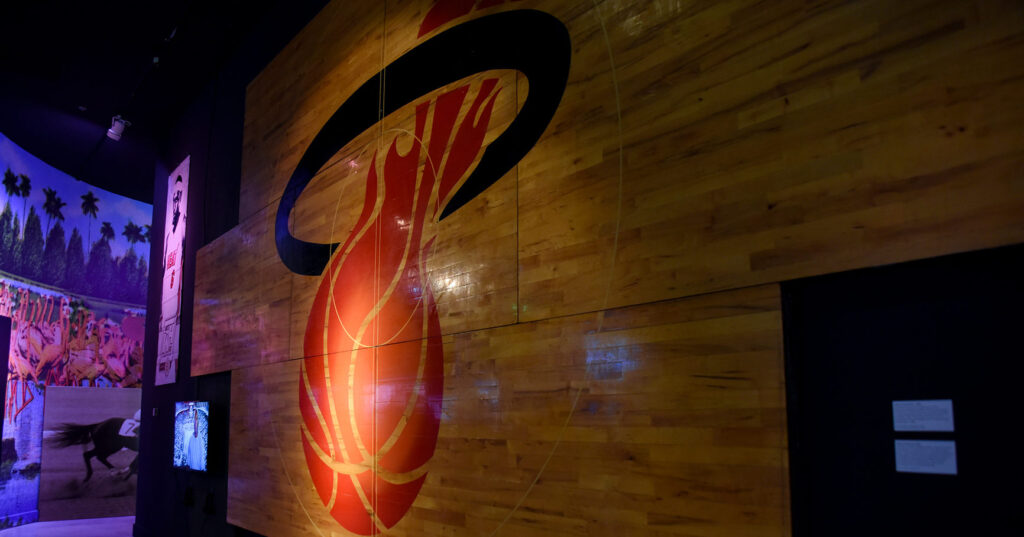 Since the 1920s, sports events and teams have both mirrored and influenced the development of the area. Miami Jai-Alai, featuring the “world’s fastest” ballgame, and Hialeah Park, showcasing horse racing, were two early sporting attractions that lured northern tourists and fueled the public’s growing fascination with the area. By the early 1960s, the Fifth Street Gym in Miami Beach, home to champion boxers like Muhammad Ali, emerged as an island of democracy amid the realities of Jim Crow segregation. Meanwhile, the newly opened Miami Marine Stadium was gaining popularity, and the sport of powerboat racing symbolized “sun and fun.” The professional sports franchises followed, as did the rise of the University of Miami’s football program, confirming Miami’s status as a modern metropolis.

“From a historical perspective, the thing that is most striking is how central South Florida’s sporting scene has been to its identity almost from the very beginning. Hialeah Park and Miami Jai-Alai date to the mid-1920s, and both were not only important tourist destinations, but really shaped the way that people understood South Florida,” said exhibition curator Gaspar Gonzalez. “These kinds of attractions conveyed a sense of South Florida as a unique place.”

Curated by HistoryMiami and Gaspar González, a Yale-trained historian (and former Miami New Times writer) known for creating Emmy-winning documentary programming that has been featured on PBS, ESPN and others, the exhibition tells this story of evolution through photographs, trophies, uniforms, and never before seen items related to South Florida’s sports scene. In addition, two short films — one on Hialeah Park, the other on the Marine Stadium, as well as a series of short video interviews with some of South Florida’s most iconic former athletes, will be played throughout the exhibition.

Presented by Hialeah Park and HistoryMiami, the 5,000 square foot exhibition will showcase artifacts from HistoryMiami’s own collection, individuals in the community, as well as the area’s sports venues and professional teams.

“The exhibition appeals to a diverse audience,” said Stuart Chase, President and CEO of HistoryMiami. “From the days of horseracing to the players who graced the gridiron, Beyond the Game not only celebrates sports history, but offers a fresh perspective on the impact it had on Miami becoming the world-class city it is today.”

HistoryMiami Museum will host a Grand Opening Celebration on July 16, 2016 and will feature team mascots, games, and fun for the whole family. The all-day event will be FREE and open to the public. Starting July 17, 2016 tickets to see the exhibition cost $10 for adults, $8 for seniors and students, $5 for children, and free for children under 6 years old. A special member preview day will be held July 15. For more information on becoming a member of HistoryMiami Museum contact Hilda Masip at 305-675-1618 or visit www.historymiami.org.

HistoryMiami Museum, a Smithsonian Affiliate, is the premier cultural institution committed to gathering, organizing, preserving and celebrating Miami’s history as the unique crossroads of the Americas. We accomplish this through education, collections, research, exhibitions, publications and city tours. Located in the heart of downtown Miami, HistoryMiami is a 70,000 square foot facility and home to more than one million historical images and 30,000 three-dimensional artifacts, including a 1920’s trolley car, artifacts from Pan American World Airways, and rafts that brought refugees to Miami. For more information, call 305-375-1492 or visit historymiami.org. Social Media: twitter.com/historymiami, facebook.com/historymiami360, Instagram.com/historymiami.

Gaspar González has produced documentary programming for PBS, ESPN, and others. His credits include the national PBS release Muhammad Ali: Made in Miami, the Emmy®-winning Hecho a Mano: Creativity in Exile, and the Grantland short documentary Gay Talese’s Address Book. He is currently writing and producing the feature-length documentary A Long Way from Home: The Untold Story of Baseball’s Desegregation. His work has been recognized by the National Endowment for the Humanities and the American Cinematheque. He earned his Ph.D. in American Studies from Yale University.