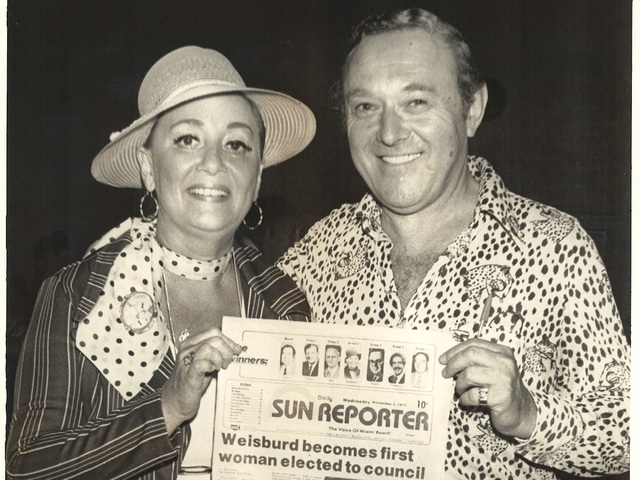 Some might say that I was made to serve in public office. I don’t know, but I have lived an interesting and good life.

I learned so much doing what I did, what I still do. I looked back at an old calendar from when I was a city commissioner in Miami Beach, the first woman to serve in that position. It was full of occasions and events: meetings, breakfasts, lunches, cocktails, dinners. I loved it and I still do.

I grew up in the Bronx and my husband, Sidney, was from Brooklyn, which was like a planet in itself in those days. We moved to Miami Beach in 1960 because it was just too cold up in New York. My parents were already snowbirds, coming down each winter. It was beautiful. We never closed our doors or locked anything up.

We left a grayish city for the colors of Miami Beach and quickly saw the potential in the city. It was full of retirees in those days and we were in the prime of our 30s.

Miami Beach, and even Miami, was like a secret that just needed to be told.

In the 1970s, we realized the great potential Miami Beach had and, as residents, our vision saw what the area could become for the world.

Once my two oldest sons were in high school and the youngest was starting school, I had a lot more free time and I wanted to get involved. I ran for commissioner because I thought the best man for the job was a woman.

In those days, they were called councilmen, but that changed once they had a woman in office!

I served as commissioner for two years, 1977 to 1979. I look back to the days of campaigning as a time where I was able to get a lot done to help the city, but it was after I left office that I was really able to make an impact. My husband followed and became a three-term commissioner. We were the first couple to both serve in that position.

I served as chairman on the Miami Beach Chamber’s education committee for more than 12 years, the Miami-Dade Cultural Affairs council and so many other positions. My husband and I wanted to see Miami Beach reach its potential and be the city it has become today. I had to learn all about politics; I came from the PTA.

In office and as a private citizen, I always believed in the importance of education. I worked to keep the library in Miami Beach where it is. When they tore down South Beach Elementary, it broke my heart. They didn’t have enough children living in Miami Beach to have a school there in those days. Of course, that has all changed and now Miami Beach is full of families of all ages. It’s wonderful to see.

Today, I am still advocating for my community. I believe that everyone should do their part. I am president of Miami Jewish Health Systems Hazel Cypen Tower tenants’ council and co-president of their foundation’s women’s auxiliary. We raise money to make improvements and I make sure that the tenants’ opinions are heard in an organized manner. I was asked to run for the position after living there only six months; I guess I had made an impression. I’ve been serving for seven years now; there are no term limits here.

I’ve also seen the city of Miami change. Sidney and I had a vision and feel that it has come true. I think that the Latin influence has been a tremendous cultural addition that has enhanced the city so much. It is what makes Miami, Miami. The dream I had of seeing this city become a truly international destination brings me such joy, but there are still advancements that need to be made.

Midtown and Wynwood have changed so very much in recent years; it’s beautiful.

I hope Overtown will be next. It’s a pity that the people who live there have had to suffer so much, but there has always been a vision to fix it up and ensure that everyone has access to the same great education we worked so hard to get around the city. I hope to live to see the day that that plan is in place.