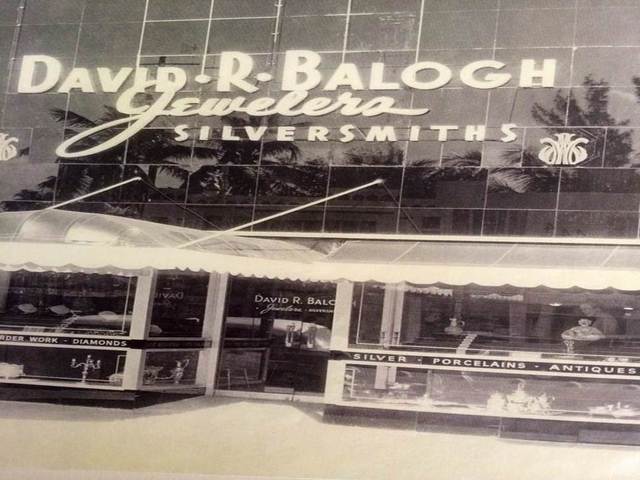 My father, David R. Balogh, is a Miami Beach legend. Most Beach people knew him and many, many shopped at his Balogh jewelry store.

Today, wherever I go, whether Miami, New York City or even Sun Valley, Idaho, I meet people who proudly show off their long-ago-purchased Balogh treasure.

My dad’s story is in many ways typical of the tales of those designated by Tom Brokaw as “the greatest generation,” those men and women who helped us defeat Nazism in World War II and then returned home to create the most prosperous and free nation, not even fathomed by our founding fathers.

I do believe, however, that my dad has some very distinguishing qualities, especially his unusual embodiment of both an ambitious drive coupled with romantic warmth and charm. He was the Navy vet who sent home every paycheck to his loyal wife Sallie. And when he returned from the war, they drove their old station wagon from New York City to subtropical, undeveloped Miami Beach to begin their family life with infant daughter Joan. What drove him to Miami, in addition to his run-down jalopy, was his conviction that Miami Beach was nirvana with its consistently sunny weather, the ocean and the palm trees. This was the venue to start a business and a life.

My parents rented a very small store on Arthur Godfrey Road, as they certainly could not afford Lincoln Road. They began a “mom and pop” antique business. My dad’s optimism led to his conviction that his customers would invest in and celebrate a new, good life with lovely items both to wear and to adorn their homes. He believed both in Miami Beach and in America. He was spot on about his customers, Miami Beach and America.

In addition to his foresight and optimism, he had skills. He had an uncanny business savvy, sensing where and how to buy, and he had a charismatic ability to sell. He loved beauty and believed in investing in real, tangible items. This mom and pop business grew just as he had envisioned; it was enlightening to witness the business morph from a two-person, seven-day-a-week operation into an internationally renowned jewelry store. He opened stores in Coral Gables, Hallandale, the Diplomat Hotel and much later on Madison Avenue in New York City. But the basis of his business and his heart remained in Miami Beach.

As my father’s business grew, so did Arthur Godfrey Road. It was symbiosis; David Balogh and Arthur Godfrey Road fed off each other and grew together. He purchased real estate on the street and involved himself in leadership roles, such as establishing the parking facilities to help all the small businesses and restaurants in the area. He was active in the Miami Beach Chamber of Commerce and many local and national philanthropies, such as Mount Sinai Hospital, juvenile diabetes and the University of Miami. He became imbedded in the fabric of Miami Beach life. My dad retired at age 92, but he still puts on his suit and tie every day and enjoys riding around looking at his properties.

My dad’s dedication and focus went considerably beyond his jewelry and real estate businesses. He was an accomplished musician — a pianist and flutist. He actually met my mom in Astoria, New York, through his music; he was her piano teacher. He played first flute in the Miami Beach Symphony and I remember feeling special to be called up on stage to conduct when the symphony came to my North Beach elementary school. He was so proud that he was able to play under the maestro Arturo Toscanini. My dad’s special motto, still displayed in his closet shelf, is “you never fail until you stop trying,” and this definitely permeated the inner structure of his businesses and his family. Fortunately, I was able to incorporate some of my parents’ strong work ethic and very ambitious, yet measured, approach to life.

I grew up in a very close family and was indoctrinated with family-first values. As with his business life, my dad also fulfilled his familial goals. My younger brother, Bobby, a “chip off the old block,” has built his life in the Miami area. After Yale undergraduate school and then law school, Bobby has taken our father’s real estate interests beyond even David’s expectations. He and his wife, Cara, have molded two talented children, Andrew and Alex, both Yale undergraduates.

I am a practicing psychoanalyst in New York. My husband, Marty, guided by my father, opened his own jewelry business in New York almost four decades ago. We have two wonderful and accomplished daughters. Cara is a Ph.D. and professor of American literature, while her sister, Anna, another “chip off the old block,” is in the real estate business. Clearly, all this was the result of the example he set, the drive he had and the quality and quantity of time he and my mom spent with us.

The Greek hero Achilles was given the choice by his goddess mother Thetis to live either the adventurous, but short life or the long, undistinguished one. My dad, now 94, my hero, never had to make this choice. He has lived both.