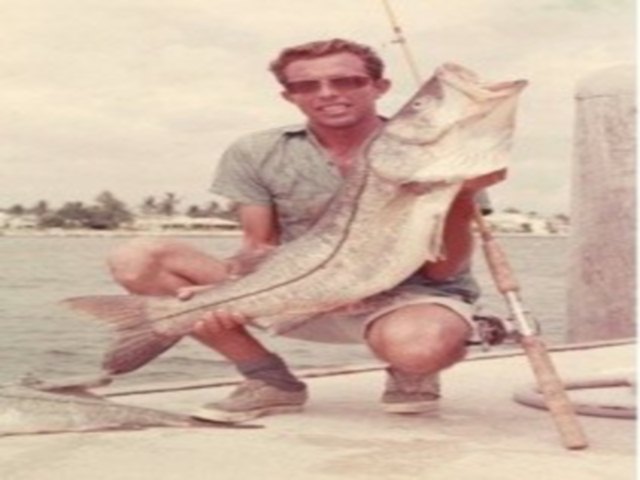 My father was a fisherman, as were his fathers, and since I followed in their footsteps, I am a fisherman, too.

He fished the streams of Scotland as a boy and, when he came over to Orlando, he fished the freshwater lakes and Indian River, catching bass, trout and flounder. Later, one of his outstanding Metropolitan Tournament winning catches was a 25-pound redfish he caught while fishing with his brother-in-law, Carl Lauer, at Flamingo in 1962.

In 1963, my father retired from Southern Bell and went to Freeport, Grand Bahama, to manage the telephone company for a few years. Then he consulted for a few independent telephone companies around Florida until he died in 1970 at 67 years old.

My family and I first moved to South Florida in 1945. As a kid, I remember winning some fishing contests, then identifying fish on an outdoor radio show in Jacksonville. I fished the Palm Beach Inlet Dock with my father and, in the evening, jacks and snook would chase schools of mullet onto the beach and the rocks. A large moray eel lived in a pipe by the dock, and there was only one building to be seen across the water on Riviera Beach (a nightclub?).

I came back in the 1960s to fish the mullet run each fall, becoming the only Miami member of the Jetty Conchs fishing club.

In 1946, we moved to Coconut Grove and kept our boat in a canal near the end of Southwest 22nd Avenue. This area east of Bayshore Drive was all mangroves at that time. I remember fishing off Key Biscayne before they built the bridge, and in the bay, we caught snapper, trout and mackerel using small surf rods with 36-pound squidding line. Boats would come into Dinner Key, and then people would load their car trunks full of fish.

After we moved back to Jacksonville in 1948, we often fished the bridges around St. Augustine, Matanzas Inlet and the old Mandarin loading-dock piling south of Julington Creek on the St. Johns River.

In 1954, my parents moved back to the same neighborhood in Coconut Grove and bought the house where my family and I live now. At this time, my father and I became interested in spin fishing. Our first reels were Garcia Mitchells, then Orvis 100s.

In 1955, I started working summers at The Tackle Box fishing store at Southwest 27th Avenue and U.S.?1, where I built custom fishing rods and repaired reels for the proprietor, Jack Primack. While working there, I met many people who were influential in my early development as a light-tackle sport fisherman. Some of the names I remember are: Eddie Miller, Joe Brooks, Lee Cuddy, Arthur Beryl, Buddy Hawkins, Capt. Bill Smith, Capt. Stu Apt, Capt. Gary Simmons, Capt. Bill Curtis, Chico Fernandez, Flip Pallot and John Emery.

In 1958, I went away to the Army and upon my return in 1961, I started surveying for the new Dade County Port of Miami. I also built custom bonefishing skiffs at the Glenncraft boat company. Eventually, I built my own skiff and went fishing most of the time. During this period, I developed innovations to the technology of sport fishing, some of which are still being used in the fishing community today.

I returned to college part-time, eventually obtaining an engineering degree from the University of Miami and several professional licenses. I have recently retired with 30 years of experience as a construction management engineer. I also became involved in several conservation issues, such as the creation of Biscayne National Park and the banning of commercial fishing in Everglades National Park.

Many things have changed now, but partially because Biscayne National Park was created at our doorstep, we still have fish in Biscayne Bay. On a recent trip, I caught a nice mutton snapper in park waters. I used the head and bones to make fish soup and the sauce for my quenelles.

I still look forward to fishing, although it is now a new era and there are fewer fish than there were back in the ‘50s and ‘60s. However, we can turn the tide if sport fishermen keep pushing for reforms in the preservation and conservation of our natural resources.