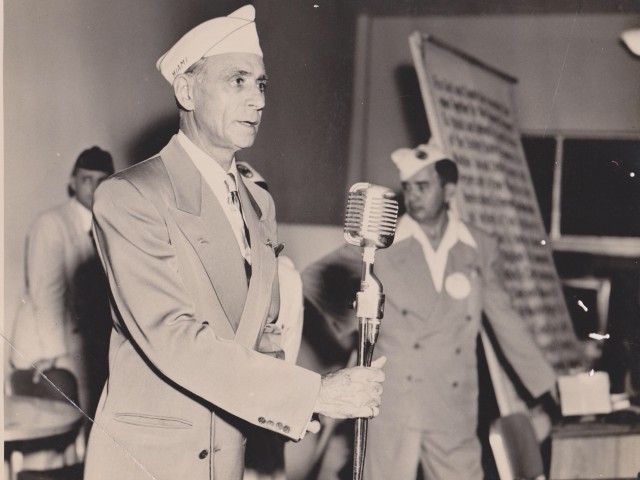 One of Jean McNamee’s first memories as a child in Hollywood was of her mother, Elise La Monaca, putting her and her brother in the family’s icebox.

Her father, Caesar La Monaca, calmly assured his wife that everything would be alright, but Elise was afraid the roof would come off the house or that the rising flood water would overtake them.

Caesar peered out of their East Hollywood home on Sept. 18, 1926. In the shadows of the stormy morning he saw images he would recount for the rest of his life: Large objects floated haphazardly through his neighborhood. Cars were being pushed by powerful winds and waves through the streets, as if being driven by frenetic children on a bumper car floor.

The Great Hurricane of 1926 killed many people on its path of destruction. What La Monaca couldn’t have realized that day was that the winds of that storm would change the direction of his career and his life. It would end up pushing him towards Miami, where he would become the city’s authentic “Music Man.”

La Monaca was born in 1886 to a shopkeeper father, Vito, in San Severo, near the heel of what is the Italian boot. His mother, Giovanna, raised six children.

He was born Cesare, which he Anglicized to Caesar in America. He followed his older brother, Giuseppe, who later changed his name to Joseph, into the Banda Bianca, an Italian community band in which new band members were apprentices, studying music theory as well as instrumental techniques until they were good enough to play with the group.

After Joseph earned a flute-playing job in Ellery’s Royal Italian Band, a touring group in the United States, he found a spot for Caesar as a horn player.

The La Monaca brothers immigrated and traveled America’s booming heartland, playing concerts, festivals, fairs and any event that would hire them.

As America entered World War I, La Monaca was drafted. His expertise in music was discovered and he was made the enlisted bandleader of the Camp Kearney band, in California, while serving in the 82nd Infantry Division. During those years he transitioned from musician to bandleader.

The war wound down before he was deployed and La Monaca moved back to the Northeast, where he worked on Broadway and in vaudeville. In New York, he met a beautiful young Italian immigrant, Elise D’Addona. She was 15 years his junior but Caesar proposed on their first date and they were soon married. The La Monacas soon had two children, Caesar Vito and Jean.

Joseph La Monaca moved to Philadelphia, where he began a prestigious career as flautist and composer with the Philadelphia Symphony.

Ceasar La Monaca brought his band to Florida in 1923. With six new houses starting construction daily, developer J.W. Young’s Hollywood was exploding with residents and they needed entertaining as much as the tourists in Young’s hotel. Young hired La Monaca full-time. By 1926, Hollywood had a bandshell, an outdoor stage at the casino, and countless other venues for live music. La Monaca even formed a marching band to participate in Hollywood’s first Fourth of July parade.

La Monaca soon won the job producing seasonal concerts at Miami’s Bayfront Park. His free concerts became a social staple, with thousands in attendance at almost every show. He attracted guest soloists like the famed Mana-Zucca and local John Basso. He introduced thousands of music fans to classical songs he arranged from memory. His bands also played popular songs and even some of his own compositions. La Monaca wrote several songs about Miami.

He was always teaching music and bringing good musicians together. He incorporated members of the 265th Coast Artillery band of the Florida National Guard band, where he was the bandmaster, and students from the University of Miami, into his shows.

During the Great Depression, La Monaca, through the Works Progress Administration (WPA), was able to get unemployed musicians to teach music to his drum corps.

It is impossible to count the thousands of young men and women La Monaca trained over the years. He and Miami Sheriff Thomas Kelly, a fellow Legionnaire, launched the Miami Boys Drum and Bugle Corps for younger boys. Even after they retired from the marching field, they helped guide the development of the Miami Vanguard and Legion of Brass drum corps. La Monaca taught Boy Scout drum corps in Miami and Hollywood. He organized the predecessor to the Greater Miami Youth Symphony.

Daughter Jean McNamee recollects one Orange Bowl parade in which her father marched the route five times. As soon as he would get to the finish line, a police escort would take him back to join another of his marching bands or drum corps.

From 1926 to his death in 1980, La Monaca’s bands were everywhere in Miami: His band opened the horse track at Tropical Park in 1931 and played there and at Hialeah race track regularly. In 1933 his band was at Bayfront Park during the attempted assassination of President-elect Franklin Roosevelt.

During World War II, La Monaca was too old to serve. He was forced to retire from the military. He joined the all-volunteer Florida State Guard and helped the sales of war bonds.

He worked tirelessly in the industry that brought him joy and success. He was a musician, composer and a respected conductor. La Monaca, an Italian immigrant whose life began under adverse conditions, arranged his way to the American dream as Miami’s Music Man.