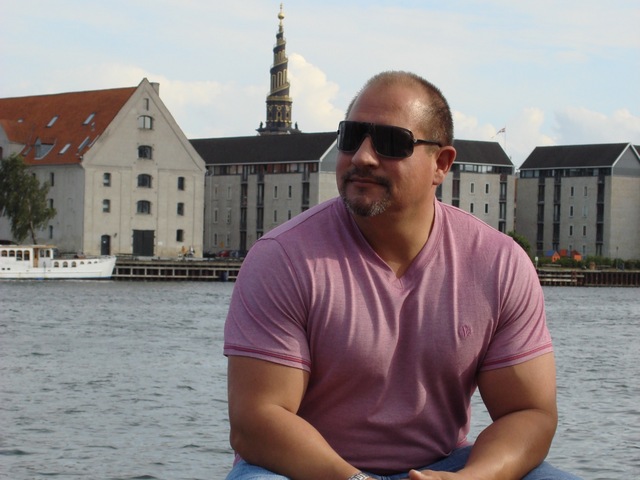 I was born in the city of San Pedro, California. Our family is very large and of Mexican descent. I was the youngest of four children. We grew up in a Catholic parochial school. Then I chose to further my education.

I was the only one in my family who went to college. And I was the only one who decided I did not want to follow the routine that everybody did in the city where I came from, which is basically working on the docks and in the shipyard.

In my third year of medical school, I found that gastroenterology was a field of medicine I really enjoyed. Afterward, I applied for fellowships including the hepatology program at the University of Miami. And that’s how I landed here in 1988.

I spent two years in that program and then proceeded to apply for a GI fellowship and was accepted at the University of Florida in Jacksonville. I did my two years of GI training from 1992-94 in Jacksonville and then returned to Miami in 1994 to join the digestive medicine associates group.

Coming from a Mexican-American family, the traditions that people in Southern California have in relation to the Latino population is extremely different than what I felt here in South Florida.

In California, prejudice and racism is subtle but it’s present. Here, I think there’s a tremendous sense of unity and a sense of being proud of your heritage. There was an exposure to Latin culture and all parts of Latin America, especially the Cuban population.

It was something that I never had a flavor of in California. I realized how much I liked that.

Unfortunately, in Southern California, growing up in the society that my parents grew up in, they were so tormented about being Mexican American that many of them chose not to speak Spanish to their children because they didn’t want them to go through the ridicule that they grew up with.

So despite the fact that my grandparents spoke no English, most of the grandkids could not communicate with them because the parents did not speak Spanish to us.

I felt that was a tremendous disadvantage. Here in South Florida, if you don’t speak Spanish, you’re at a disadvantage.

I thought it was an intriguing and a wonderful experience. I’ve always studied Spanish in school. I was the only one in my family who wanted to be able to speak and communicate with my grandparents and all my family, including my family in Mexico.

I learned Spanish in school and I forced my parents to teach it to me and fortunately, when you immerse yourself into a society where they only communicate to you in Spanish, you learn it very quickly.

Fortunately or unfortunately, the accent I now have after 23 years in South Florida is very different than the accent that a Mexican American would have. I’m told this relentlessly when I go home to visit my family.

I do miss the California weather. I miss the terrain. I miss the mountains, the deserts that California offers. But the advantages that South Florida has are something that I chose to take. And that’s why I just decided to live here after 1990.

I currently live on the beach. I lived in Kendall for a few years but was fortunate to purchase a home many years ago on the beach, which I decided I wanted to renovate.

I’m very happy living on the beach at the present time. It’s not in Miami and it’s not in South Beach, but it’s in between. I feel very protected and secluded and I love the environment on the beach.

I work in Miami Lakes, at Mercy Hospital and at the University of Miami. I love my job and I love working with my patients here in South Florida.

The Latin community is very emotional. They’re very drawn to making sure that their loved ones are taken care of. I take pride in what I provide patients, the ability to understand the disease process in a way and to the degree that they feel they understand what may be going on.

I have worked hard to get where I am in my life. I feel that never stopping and never holding back on any dream you may have or desire you want to do, is important. And it doesn’t stop.

Once you’ve reached your goal, you can go on to something else. So after being in medicine, being a physician since 1985, I realized that doing other things in life are important. I recently went back to school and I completed a business degree at the University of Miami. I was able to attain an MBA in Health Sciences and I finished that in 2012.

It was extremely rewarding and it was a goal. I think anybody, Hispanic or not Hispanic, can reach his or her goals in life. That doesn’t mean that they can’t continue and go on in life and attain new things.