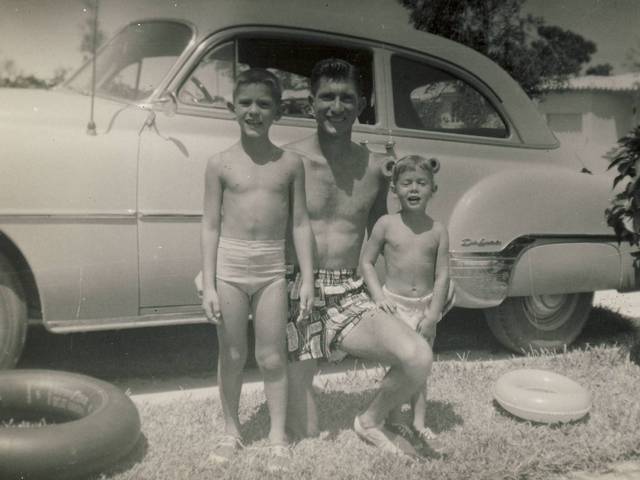 Although my mother, the former Edith Leibowitz, was born in New York, she graduated from Miami Beach High in 1942. So it was only natural that she and my father, Marvin Kuperman, would move to Miami following their marriage in 1946.

I was born in Victoria Hospital (which no longer exists) in 1948. We lived in a small one-bedroom apartment in what is now the heart of Little Havana.

In 1950 we moved into a “huge” two-bedroom, one-bath house with a Florida room in a new development called Coral Gate (purchase price – $10,000.00). The development consisted almost entirely of young baby boomers and their families. No one had air conditioning so everyone kept their front door open since all houses came with screen doors which allowed for cross ventilation and which invariably remained unlocked the entire day. (Needless to say, no one had alarm systems!)

My sister, Debbie (Debra), was born in 1951, which initially was exciting until it became apparent that she was going to permanently reside in and basically take over my bedroom.

My mother didn’t have a car in the early fifties so we walked almost everywhere. Nearby was Margaret Ann, a large grocery store on the corner of Southwest 32nd Avenue and Coral Way, the new Sears Roebuck on Coral Way, and of course all of the stores on Miracle Mile.

On the northwest border of Coral Gate stood the Coliseum, which housed a large bowling alley (at which my parents bowled regularly) with adjoining athletic fields. Every Saturday at 1:00 p.m. an air raid siren which sat on the top of the Coliseum began blaring for several minutes.

I attended Auburndale Elementary where I majored in misbehaving. I still managed to win the fourth grade spelling bee and was also one of the fastest kids in school in the shuttle run.

A large segment of the Coral Gate kids took a city bus home from school each day and all of us would spill out of the bus at the Southwest 18th Street and 32nd Avenue stop. We all purchased bus cards which cost $1.50 for 30 fares and which the driver would punch holes in. Between the ever-increasing hole punches and our stuffing the cards in our pockets, they became frayed and tattered within a week or two.

Two or three mornings a week we had Home Milk delivered to our doorstep by our milkman. Every once in a while he gave us blocks of ice to play with (which quickly melted), as well as wooden milk crates. In the afternoons (especially in the summer) the Good Humor Man in his starched white uniform would drive up and down every street broadcasting music from his truck in order to market a variety of ice cream. I also remember lady truck drivers who regularly delivered laundered cloth diapers to those families with babies.

After school we played baseball and football right in the middle of the street. Every once in a while we got into trouble when a stray baseball bounced off of someone’s car.

At a young age, my father began taking me to watch the “original” Miami Marlins play at the old Miami Stadium. The Marlins were a Triple A team playing in the International League, which played U.S. teams as well as teams from other countries, including the Havana Sugar Kings. We were once very fortunate to attend a game in which the late great Satchel Paige pitched.

In the late ‘50s the kids in my neighborhood began collecting Topps baseball cards which came in a small wrapper and also included a piece of bubble gum as thin and hard as one of the baseball cards. We would “flip” the baseball cards off a wall and keep whatever cards our card landed on. Incredibly, it also became popular in our neighborhood to attach our cards to the spokes of our bikes with clothespins which resulted in the bike making loud clicking sounds when we rode. I still get nauseous thinking about all the Ted Williams, Mickey Mantle and Willie Mays cards that got shredded in our bikes.

My grandparents owned a small apartment building on South Beach and we would visit them almost every Sunday. We often walked to the beach where we swam in the crystal clear waters of the Atlantic Ocean. On other occasions my grandfather and I would walk to the Clevelander Hotel armed with a pickle jar and fishnet to catch guppies in the small waterways which lined the hotel.

Some of the restaurants that we frequented were the Big Wheel drive-in located just south of Coral Way on Southwest 32nd Avenue, the Red Diamond Inn on Lejeune Road, Harvey’s Restaurant on Flagler Street, as well as Wolfie’s and the Famous Restaurant on Miami Beach. A special treat was a trip to Fun Fair on the 79th Street Causeway. All of these restaurants closed decades ago.

In the summer I spent many days playing baseball and other sports at the Boys Club on Southwest 32nd Avenue and Dixie Highway. Almost every summer, my family went on a “stay-cation” to the Colonial Inn Motel on Sunny Isles Beach. Not only did the motel have a low diving board, it also had a high diving board, both of which are unheard of in today’s liability conscious society. We used to run off the high dive with legs flailing, screaming “Geronimo!” and hope that we didn’t land on any unwary swimmers. In those days, all females, regardless of their age, were required to wear bathing caps.

Although Miami is now a bustling, culturally diverse, cosmopolitan city, I sure enjoyed being a kid in the simpler, slower paced Miami of the fifties.

My wife, Mayita, and I live in Pinecrest. After practicing law in Miami for more than 40 years, I see retirement in my future. Although our son lives in California, my daughter and her family live nearby. My granddaughter is the fifth generation of my family to call Miami home.