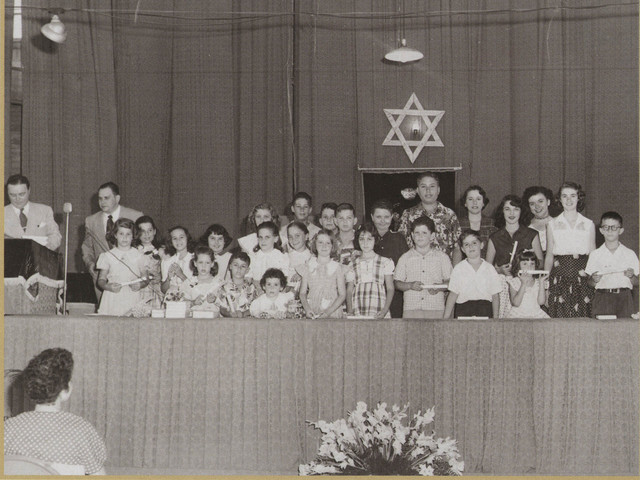 My parents, Sam and Esther Leviten, and my brother, Eddie, came to Miami from Chicago, in the summer of 1946, because my father had hay fever.

They moved to the Shenandoah area in the city of Miami. I was born on December 8, 1947. My father worked for different companies, until he bought Atlas Moving & Storage in 1948, and he later started Atlas Rug Cleaners. We moved a few times (it was free) until we bought a house on Southwest 18th Street and 18th Avenue. We stayed there until 1980.

My parents were active in many organizations. One was the American Jewish Congress, where they helped to fight religion in the schools. Our family was active at Beth David Congregation from 1949-59. I rejoined on my own in 1967. Other organizations Dad belonged to were: the Greater Miami Jaycees, the Graybeards, Sertoma International, the Elks Club, Business Exchange and The Movers Association.

He was president of the National Defense Transportation Association when Hurricane Donna came to South Florida in 1960. My parents and I went down to the upper Keys after the storm to find out what kind of transportation was needed to get supplies and food down there. Dad died from Parkinson’s in 2006.

Mom was active in the PTA at Beth David and at my brother’s and my schools: Coral Way Elementary, Shenandoah Junior High, Miami High for Eddie and Gables High for me. She was also active in many diet clubs! Compared to Americans today, she wasn’t that fat! My parents and I were also active in many political campaigns. Mom died from lung cancer in 1970, although she never smoked.

Eddie was active in 322 AZA (B’nai B’rith Organization) during high school, and he was even president one year.

I was active in the chorus at Gables High, even though I was told to lip synch by my best friend! I was better at selling chorus candy and working in the choral library. I tied for the win in candy sales my sophomore year. We enjoyed the state chorus contest in Daytona every year. After I started lip synching, we were rated superior!

Eddie went to the University of Florida and received his bachelor’s degree, and was in Tau Epsilon Phi. I went to University of Cincinnati for 1¼ years and froze. I came back and worked for two years. Then I went to Miami-Dade Junior College and F.A.U. Dade Center (on South Beach).

Eddie moved to New York, got married, had a son and two grandchildren, and owned an electrical supply business. He retired a few years ago. He plays bridge!

I worked at different jobs until I was hired by Dade County. I worked there for 31½ years, until I retired a year and a half ago. Volunteering has been my life, through political campaigns, the feminist movement, my temples, history groups, the LEAD program, and fundraising for breast cancer research. Now I volunteer for the county. Temple Israel is my temple now, because they helped me so much when I had breast cancer.