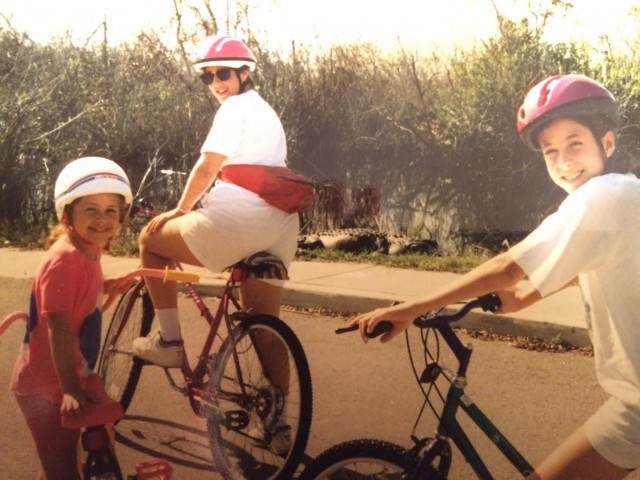 My memories of Miami begin 34 years ago in 1980 when I came here for the first time for a nursing internship at Cedars of Lebanon Hospital. I had completed three years of nursing school at the University of Pittsburgh and came to Miami with a classmate for the summer. We lived in what was called the Cedar’s North Tower in the Civic Center. There were other nursing students from all over the country and we bonded very well. Of course, Cedars hoped to recruit us after graduation as there was a nursing shortage at that time. Our first weekend in Miami unfortunately was interrupted by the McDuffie riots. We all called our parents to reassure them that we were safe in spite of having swat team officers on the roof of our building as we watched parts of the city on fire.

I met my future mother-in-law during my first week on the job. She was a nurse at Cedars and upon meeting me she replied, “Have I got a son for you!” Our first date was to see the movie “Dressed to Kill” with Angie Dickenson and Michael Caine at the Omni theatre. By the second date, it was true love.

At the end of the summer, I returned to Pitt to complete my final two semesters of my nursing degree before moving permanently to Miami after graduation. I took my nursing boards at the Miami Expo on Milam Dairy Road and began working at Cedars. I lived again temporarily in the Cedars North Tower where my husband proposed to me on the rooftop overlooking my new city. We were married in November of 1981 and we bought our first townhouse in West Kendall when the home loan interest rates were greater than 15%.

My husband grew up near 8th Street and 71st Avenue and so he introduced me to Gold Star Deli, Sarrusi’s, Pumpernik’s, Arbetter’s and the Blue Grotto. We explored the Keys, Marco Island, and his family’s favorite destination: Sanibel Island. We bowled at Bird Bowl on a league, and shrimped off the bridges of the Rickenbacker Causeway.

We had two daughters who spent lots of time at the new Dave and Mary Alper Jewish Community Center in after-school care and summer camp. My husband and I took ballroom dancing and salsa classes at Miami-Dade College in Kendall. We picked strawberries and tomatoes in a field where Town and Country is now. Some of our favorite family activities included strawberry milkshakes at Burr’s when visiting Monkey Jungle, nighttime bike trips at Shark Valley when there was a full moon, kayaking at nine-mile pond in Everglades National Park, snorkeling at Pennekamp Park, and swimming at Venetian Pool.

In August of 1992, we were on vacation with our children in West Virginia when Hurricane Andrew struck. We had people check on our home and found out it was uninhabitable. My daughters and I stayed up north for another week and when the airport opened my husband flew back to Miami with a brand-new chain saw as his carry on. How times have changed. He knew what a useful commodity it would be with all the downed trees reported to us by the neighbors. As he drove from the airport to survey the damage, he found it difficult to find the house without the usual landmarks. Luckily our neighbors were willing to take us all in until our house was ready to move back into in mid December.

During the next several years we got the house and yard back into shape. My husband, who has a degree in horticulture, restored our yard with lots of fruit trees including grapefruit, orange, lemon, lime, and tangelo trees and other native plants. However, in 1999, a citrus canker outbreak occurred putting all of the state’s citrus trees at risk and so an eradication program was enacted. One day after work we came home to find all of our beloved citrus trees cut down and in the swale of our house. After a few days of moping, we decided to make the most of our now barren yard by putting in a swimming pool. This was the best investment for our family because we have spent many hours of quality time together trying to stay cool during the hot summer months.

I feel so fortunate to have had the experience of living in this multi-cultural city where I learned to love churros and hot chocolate, pan con lechón, chicharrones, and becoming bilingual while working in an ambulatory center on Calle Ocho. My husband and I have a pool surrounded by mamey, lychee, dragon fruit, mangoes, atemoya and papaya. We continue to find new activities in Miami to enjoy, for example the South Dade Cultural Center, Cosford Cinema, the Tower Theater with Azucar ice cream across the street, O Cinema, and Schnebly winery where our daughter was married. I love living here in Miami and am so grateful to my mother-in-law for giving me a reason to come back permanently.