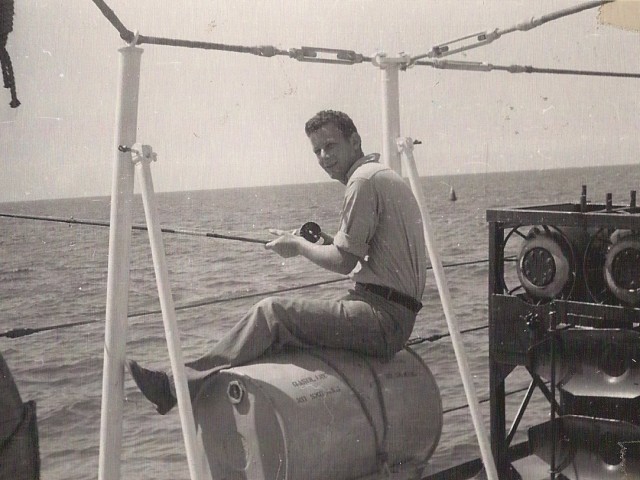 The U.S. Coast Guard does more than search for rafts, drugs, and errant boaters in this area. “Coasties” saved 70 merchant mariners during a blizzard off Massachusetts in 1952. It was called the “two-tanker disaster,” and this Miamian was aboard one of the Coast Guard vessels involved in the rescue of two storm-savaged ships.

I grew up on Miami Beach, and always admired those sleek Coast Guard cutters that were moored off Biscayne Bay’s islands. Who would have dreamed that some day I would be a seaman aboard a cutter involved in the T2 tanker rescue? It is still listed as one of the Coast Guard’s 10 most significant rescues.

During my summer vacations from the University of Florida, I bell-hopped at the Sands, Royal Palm, and White House hotels. My favorite bartender worked at the White House — my dad, Philip Morris. The oceanfront lounge had the greatest view of any beach hospitality venue.

Who would have known that I would meet my future wife in the nearby Club Deuce? Diane drove down from Detroit to get away from another cold, slushy Michigan spring. Two gal friends introduced her to the Deuce, now the oldest bar in Miami.

A fairly new CG cutter is moored at Port Miami. This 154-foot fast-response cutter is named the Bernard C. Webber, after a true American hero. Bernie rescued 32 stricken mariners from the tanker which had cracked in half from the fury of this unnamed storm a few miles east of Chatham, Massachusetts.

Bernie was the coxswain (skipper) of a motor lifeboat, out of Chatham
Light Station. It was 36 feet long, and had a capacity of 12 people, including a crew of three.

During the blizzard, and despite 50-foot waves, Bernie managed to cram 32 merchant seamen into his windshield-smashed boat. A 350 lb. sailor didn’t make it as he leaped from the S.S. Pendleton stern.

Cutters are named after enlisted heroes. Bernie denied that he was a hero all his life. He refused the CG gold lifesaving medal, unless his crew of three received gold also, instead of silver.

A sister ship, S.S. Fort Mercer also cracked in half, just forty miles away from the S.S. Pendleton. I was a deck-hand aboard the CGC Acushnet, which rescued 17 sailors off the foundering Mercer stern.

After a night of plowing through 60-foot seas, the CGC Acushnet arrived at the S.S. Fort Mercer’s stern section, just south of Nantucket Island. The icebreaker Eastwind was attempting to rescue three panicked sailors by pulling them over to safety in rubber rafts. One survivor had nearly drowned in the process.

Finally, our captain, John M. Joseph, had seen enough. He got permission to drift alongside the stern and convince the survivors to leap to our fantail. Capt. Joseph maneuvered the Acushnet parallel to the stern, and when we were close enough, three feet, seven distressed sailors leaped to our waiting arms. Then, rogue swells suddenly
swept us together and the vessels collided at taffrail height. CLUNK, KNEEL, HUG THE DECK!

We made a full circle and returned to rescue 11 more mariners from the tottering hulk. One hefty mariner slipped on our railing, but was snatched from the freezing water by our two bosun mates. [The word is boatswain, but the common term uses the pronunciation and spelling “bosun,” so I’ll let the Herald folks make that determination.] He explained that he wore his new shoes to make the leap. Another mariner landed on our fantail wearing two suits and two overcoats. In the chaos, he had neglected to grab a shirt.

I was third in the catch-and-hold rescue line, and was escorting a successful jumper to the pharmacist mate’s cubbyhole for his shot of brandy. “Hey, Doc!” I yelled. “How about me? I’m just as wet and cold as he is.” Doc replied, “Get this guy a shirt, and we’ll think about it.” He didn’t and neither did I, with my innards doing flip-flops.

Another merchant seaman told me, “That was the greatest demonstration of seamanship I have ever seen. It was also the worst storm I have been through in 20 years at sea.” Dented, but not beaten, or cracked, the “Mighty A” then headed northwest to drop the survivors at the Boston base.

Tally of the tragedy: 14 lost at sea, 57 rescued from foundering vessels.

To me, it was the most harrowing and exciting three days of my life.

Decades later, the CGC Acushnet was stationed in Miami. She was one of 24 cutters which helped ferry 125,000 downtrodden refugees from Cuba to Florida in the Mariel Boat Lift. In case you forgot, that historical event occurred from April to October of 1980. In three years, I got to see a panorama of America: Portland, Maine; Boston; Baltimore; San Juan; Guantanamo; and finally, the 180-foot buoy-tender CGC Bramble, in Miami Beach. This was before the Coast Guard base was built on Watson Island, so we were moored alongside Alton Road, just south of Fifth Street.

Glad to be back in Miami, but it took me months before I would go fishing with friends in their tiny 24-foot skiff.